The full-form for the abbreviation ESIC is Employees State Insurance Corporation. The ESIC (Employees' State Insurance Corporation) Act was enacted by the Indian Parliament in 1948. This basic aim of this Act is to confer certain benefits to organizational (or company) employees in events such as sickness, physical injury to the body during employment, maternity, disability and associated matters by making provisions for the same. 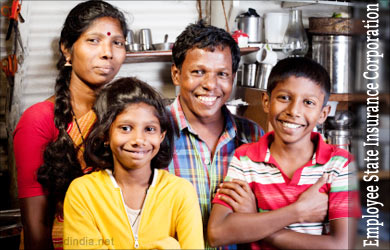 The enactment of Employees State Insurance Act, 1948 in Indian Parliament envisaged the requirement for a comprehensive, integrated and need based social insurance scheme that would go a long-way in providing protection in the interest of workers. This ESIC would be beneficial in ever-pervading risks lurking in each and every corner of human lives especially in contingencies comprising of sickness, temporary or permanent physical disablement, maternity, death due to employment injury thereby resulting in loss of wages or earning capacity. This Act facilitates medical care to all employees (workers) including their immediate family dependants, devoid of any discrimination or prejudice which is reasonably satisfactory in nature.

Subsequently, the Central Government at New Delhi, India, laid the foundation for ESI Corporation to oversee, regulate and smooth implementation of ESIC Scheme. After the promulgation of ESIC Act, this Scheme was first implemented at Kanpur and Delhi on 24th February 1952. The ESIC Act was further strengthened by absolving the employers of various companies/organizations pertaining to their obligations and responsibilities under the Maternity Benefit Act, 1961 and Workmens Compensation Act, 1923. The benefits conferred on the employees under this Act are in tune with the conventions framed by ILO (International Labour Organization).

An Introduction - Indian General [Non-Life] Insurance Companies
In today's age of consumerism, insurance requirements have expanded to keep pace with the increasing risks.

Healthcare Insurance-Common Terms and Definitions
The key to understanding health Insurance is to become an informed consumer by knowing its definitions, terms and conditions before you plan to buy it.