Are you suffering from fatigue, tiredness, dizziness, lack of concentration, looking pale or getting soreness of mouth with cracks at the corners? If you have some or all these symptoms, you most likely have Iron Deficiency Anemia.

Medindias Iron Intake Calculator will help you find out how much iron you require daily in your diet to prevent anemia and you can also choose from the suggested list of iron rich foods.

The mineral Iron is an essential nutrient like other minerals such as zinc, sodium, potassium and magnesium. Iron is important for blood production and enables hemoglobin in red blood cells to carry oxygen throughout your body. Without enough iron, your body will have fewer and smaller red blood cells that are unable to carry enough oxygen leaving you with the above symptoms. Anemia will also result in decreased immunity making you more prone to infections.
Advertisement
Haem Iron foods are found in animal-based food items, like red meat, poultry and fish. Haem iron is easily absorbed by the body. We absorb approximately 15-35% of the haem iron we eat. Non-Haem Iron foods are found in plant-based foods like cereals, vegetables and legumes. In contrast to haem iron, our body doesnt absorb non-haem iron as easily. Only 2 - 20% of non-haem iron is absorbed. 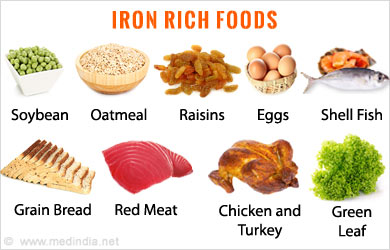 Iron helps you to maintain a healthy immune system. You need extra iron for your growing baby and placenta, especially in the second and third trimesters. Pregnant women need 27 mg of iron per day. Iron-deficiency anemia during pregnancy is associated with preterm delivery, low birth weight, and infant mortality. To avoid these conditions you should take iron from plant foods, eat foods high in vitamin C for better iron absorption, like fruits and vegetables, or foods containing haem iron (from an animal) at the same meal. Remember that iron from non-haem foods is not taken up by the body as well as iron from animal foods. You need to eat more of these foods if they are your only iron source.

Quiz on Dietary Minerals for Healthy Body
"Health is a relationship between you and your body" - Terri Guillemets Dietary minerals are inorganic substances that are obtained by the body through food that we eat. Take this quiz and find out about the minerals that ...

Superfoods In Your Diet
Superfoods should be a part of daily diet as they are packed with nutrients and healing properties.But the best part is that they are tasty too!

Daily Hygiene Tips
Moderation, even in matters of cleanliness seems to the way to health. Read these daily hygiene tips and find out how.

Iron Deficiency Anemia
Anemia is caused due to deficiency of iron, which makes you feel tired with shortness of breath. Know the causes, symptoms, diagnosis and treatment of anemia.

Diet and Nutrition for Healthy Weight Loss
Correct diet and a planned exercise regime is the mantra of healthy and sustainable weight loss.

Are Menopause Symptoms Troubling You?: Try these Options
View all
Advertisement