1954 - currently, the earliest date that a person is thought to have died of an AIDS type syndrome. The victim was a young rent-boy in New York.

1959 - The earliest that a person in the UK is thought to have had the virus - a sailor from Manchester.

1981 - 20 cases of Kaposi's Sarcoma appeared in young men NOT of Middle Eastern origin (where the condition is more common). The individuals were found to have damaged immune systems. 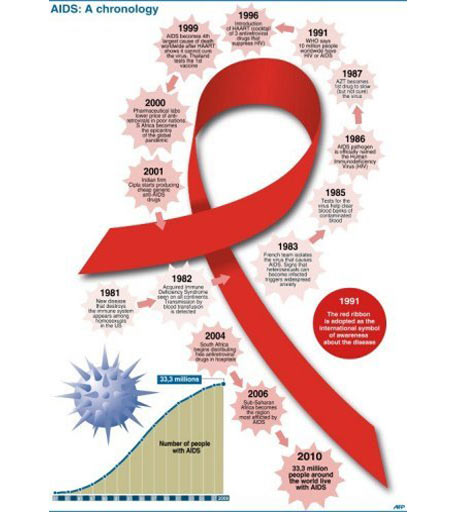 1983 - The Pasteur institute in Paris isolated a virus in the lymph glands of an individual thought to have the 'new' virus - they called the virus lymphadenopathy associated virus (LAV).

1984 - Robert Gallo in the USA isolated a retrovirus and antibodies that matched a virus in people with AIDS - HIV had been finally 'discovered'.

Immune System Immune system is the first line of defense against Viruses, bacteria, fungi, worms and other parasites, which enter the body through the skin, nose, mouth or other openings of the body, cause infectious diseases

Reproductive System Like most species, human beings have two sexes, male and female. Both the sexes have their unique reproductive system. Here are some important facts on human reproductive facts.

AIDS/HIV "AIDS is an epidemic disease, a potentially preventable, deadly infection for which there is no cure, no vaccine, and it is not under control." - National Commission on AIDS, 1993.

AIDS/HIV - Epidemiology AIDS or HIV is an epidemic disease, a potentially deadly infection that can be prevented with precautions. AIDS/HIV symptoms manifest long after the actual infection occurs.

AIDS/HIV - Lab Tests and FAQs Describes how screening for HIV is performed in a laboratory.