The centre for disease prevention (CDC) reported in 1988 that 136 countries or territories throughout the world had reported a total of 84,256 cases of acquired immunodeficiency syndrome (AIDS) to the Global Programme on AIDS. From 1979 through1988, the number of AIDS cases increased markedly in all geographic regions. The cumulative world total increased from 11,965 in 1984 to 25,150 in 1985 and to 48,413 in 1986. Forty-two countries in the Americas have reported 73% of the world total of AIDS cases. United States had reported a total of 54,233 cases. In 2004 the total number of people infected with AIDS accounts to about one million in North America, 1.7 million in Latin America. 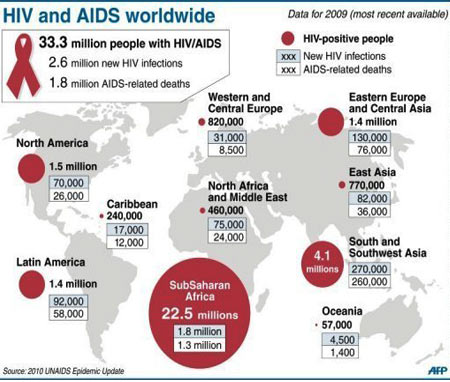 Twenty-eight countries in Europe have reported 13% of the world's total AIDS cases. The greatest number of cases has been reported from France (3,073) in 1987. Four countries with over 100 cases are Austria, France, Italy, and Spain. The highest rates per population size are in France, Switzerland, and Denmark. The lowest rates were reported from the Eastern European countries. In 2004 about 810 000 people are infected with AIDS in Western Europe, 1.4 million in Eastern Europe and Central Asia.

Thirty-eight countries in the African Region have reported 13% of the world's total AIDS cases. Fifteen African countries reported more than 50 cases each. Zimbabwe, Zaire, Uganda, Tanzania, Congo, Kenya, Burundi, Rwanda, Malawi, and Zambia have each reported about 300 to 500 cases. According to the 2004 statistics about 540 000 people are infected with AIDS in North Africa and Middle East Africa. In the sub Saharan African region about 25.4 million people are infected with AIDS.

Other countries included were Australia had about 758 cases, New Zealand about 74 cases, Japan reported about 59 cases, Qatar 32 cases and Turkey about 21 cases. In the 2004 report about 36000 cases were reported in Australia and New Zealand.

AIDS/HIV "AIDS is an epidemic disease, a potentially preventable, deadly infection for which there is no cure, no vaccine, and it is not under control." - National Commission on AIDS, 1993.

AIDS/HIV - Epidemiology AIDS or HIV is an epidemic disease, a potentially deadly infection that can be prevented with precautions. AIDS/HIV symptoms manifest long after the actual infection occurs.

Lab Test for AIDS/HIV Describes how screening for HIV is performed in a laboratory.

AIDS/HIV - Common Opportunistic Infections Kaposi sarcoma develops below the skin surfaces or in mucous membranes of mouth, nose or anus and appears as lumps

AIDS - Initial Theories and Disease Progression-Blood Test-Stages-FAQs AIDS was first detected in early 1980s, among gays, Haitians and black Africans. HIV is a descendant of a Simian Immunodeficiency Virus.