What is Torsion Testis?

The testes or male gonads are paired oval structures situated within a pouch of skin called scrotum between upper portion of the thighs. Each testis measures approximately 2x3x4 cm, weighs around 40 g in the adult, and is suspended by the spermatic cord inside the scrotum. The testes perform two major functions namely

During embryogenesis, the testes originate from the posterior abdominal wall behind the peritoneum, and gradually descend into the developing scrotum by the eighth month of fetal life marking their adult position. During its descent, each testis drags its blood supply and nerve supply after it, which then come to be enclosed within the spermatic cord. 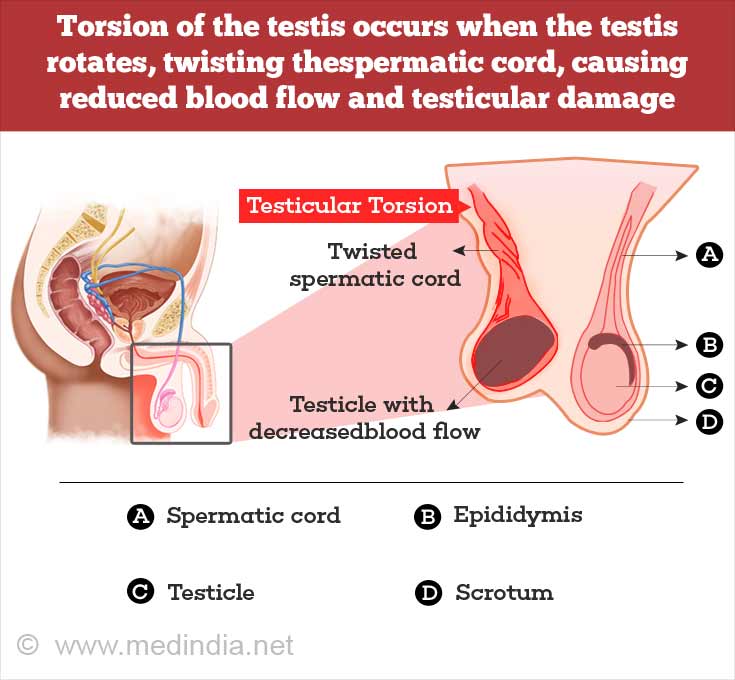 The spermatic cord is a tubular structure which suspends the testis within the scrotum. It extends from the inferior part of the abdomen to the scrotum. It forms as the testes are descending into the scrotum, and acquires the layers of the anterior abdominal wall around itself. The spermatic cord houses the blood vessels and nerves that supply the testis, and also the vas deferens, the duct-like structure that carries spermatozoa from the epididymis of the testis to the urethra.

It is evident from the above discussion that if the spermatic cord underwent twisting due to any cause, the blood vessel to the testis (testicular artery) would undergo occlusion, compromising the blood supply of the testis leading to testicular damage and ultimately death if not treated immediately.

Who Can Get Testicular Torsion?

Though they may have varying causes and modes of presentation, the outcome is the same, namely, testicular damage and infertility.

Neonatal torsion is fortunately very rare and has its share of controversies regarding its cause, nature of presentation and surgical treatment.

Why Does Testicular Torsion Occur?

Some men are born with an inherited defect called bell-clapper deformity that allows the testes to move freely within the scrotum, thereby increasing the risk of torsion that might occur spontaneously or following trauma.

In the bell clapper deformity, there is abnormal development of the tunica vaginalis (the fold of parietal peritoneum that covers the testis). Normally, the tunica vaginalis is attached to the posterolateral surface of the testis, and restricts its mobility within the scrotum. In the bell clapper deformity, the tunica is attached anteriorly and much higher, allowing the testes to move freely and thus predisposing to torsion.

Not all men with this condition will go on to develop torsion, and it is very rare for both testes to undergo torsion simultaneously. The left side is more commonly affected compared to the right.

What are the Risk Factors of Testicular Torsion?

The following factors may predispose to torsion. 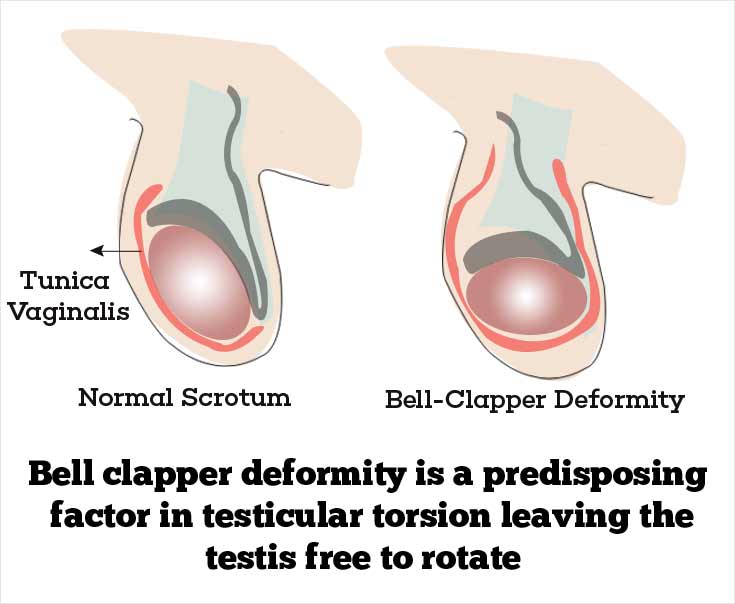 What are the Signs and Symptoms of Testicular Torsion?

The presenting features of torsion testis include: 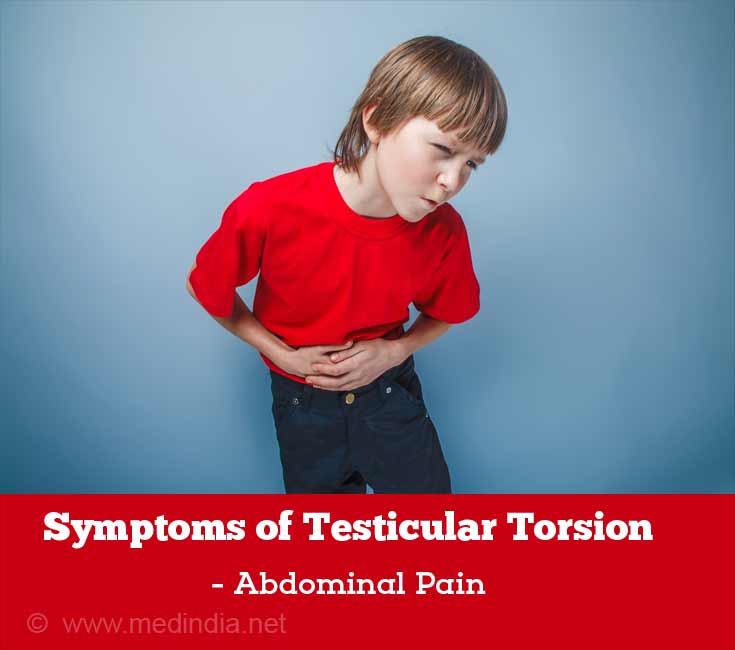 Occasionally, torsion may resolve on its own. It may again recur, but with each succeeding episode, the onset of symptoms and resolution is rapid. The risk of testicular damage is more with each episode.

What are the Complications of Testicular Torsion?

If untreated, torsion of the testis may lead to

How is Testicular Torsion Diagnosed?

In most cases, diagnosis is made based on the patients or patients family history and physical findings. In fact, it is a surgical emergency, and delaying surgery might cause irreversible damage to the testis and infertility.

In certain cases, if the pain is of very recent onset, the surgeon may order a Doppler ultrasound to check the blood flow to the testis. In torsion, the blood supply will be reduced. This helps to distinguish testicular torsion from another condition, namely epididymitis, which has remarkably similar presenting features.

However, in most cases if the pain has been for a prolonged duration of time, the patient is directly taken up for surgery without any further delay in a bid to salvage the testis. 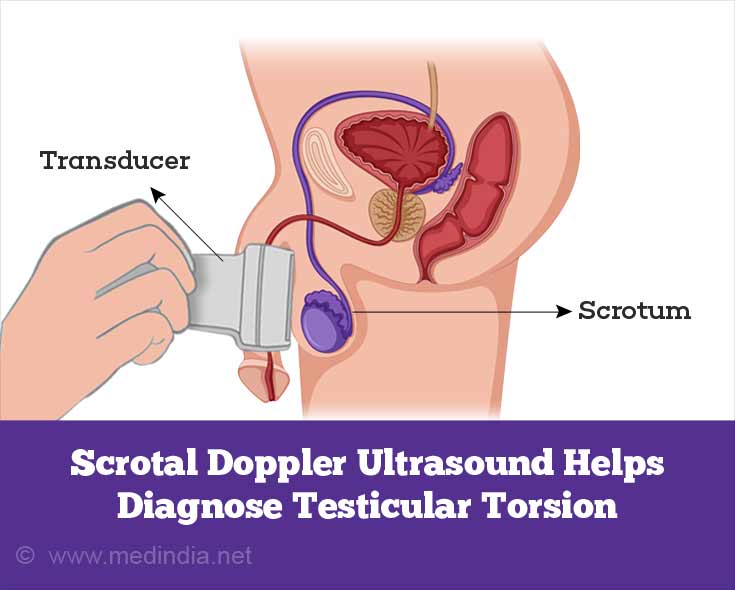 How is Testicular Torsion Treated?

Testicular torsion is a surgical emergency. In some cases, the torsion might be manually corrected during initial examination, before any diagnostic imaging.

In general, the torsion of the testis usually occurs in an inward direction, and therefore during detorsion, the testis is rotated outwardly. For instance, in the case of the left testis, the detorsion is done in a clockwise direction, when seen from the front and beneath the testis. It may be necessary to perform more than one rotation, depending on the degree of torsion. A practical guideline during detorsion would be the degree of pain relief felt by the patient.

Immediate surgical treatment is the best option to salvage the testis when torsion occurs in children or young adults.

In torsion of testis the blood supply to the testis is cut off due to the twisted cord and unless it is restored the testis will get gangrenous.

A routine urine test will rule out if infection is the cause of the pain and if there is no infection the doctors should prepare to take the patient to the operating room. If the parents are undecided about surgery the surgeon should give all the pros and cons and warn them that the salvage of testis is unlikely if it becomes gangrenous.

A good history, clinical experience of the doctor and a high index of suspicion are usually the factors on which a decision is taken for performing the surgery and in most instance the surgery is done under local or regional anesthesia within 2 to 4 hours if not earlier.

The rate of salvage of the testis is high if the surgery is done within 4 to 6 hours and drops to almost zero at 12 hours.

If the testis looks gangrenous and does not get restored after the cord is untwisted, it is best advised to be removed.

Manual de-torsion can be tried but it seldom works. However if successful, fixation of both testes may be done at a future date.

During surgery, the opposite testis is also fixed within the scrotum (orchiopexy) to prevent future torsion.

Sometimes the cause of pain and torsion is a smaller structure called appendix of testis. If this gets twisted it mimics torsion testis. In this case only this appendage needs to be removed and testis is left intact.

How Can Testicular Torsion Be Prevented?

If one is born with the bell-clapper deformity, future torsion might be prevented by fixing both the testes to the scrotum (bilateral orchiopexy)

Significantly, neonatal torsion is painless and there is no neonatal distress. It is suspected by noticing an enlarged scrotal mass with a bluish discoloration. The affected scrotum does not transmit light. Diagnosis is confirmed by Doppler ultrasound which shows markedly reduced or absent blood flow on the affected side. The testis may be absent on the affected side.

The benefit of surgical treatment remains controversial, since the chances of finding a viable testis in neonatal torsion are remote. However in the occasional case, where neonatal torsion occurs after birth, it might have greater benefit. Surgeons also remain divided on whether to explore the contralateral testis to fix it to the scrotum (orchidopexy) or leave it alone. The consensus appears to be in favor of fixing the normal testis to prevent the disastrous consequences of asynchronous torsion occurring at a later date.

Surgical Removal of Testis or Orchidectomy - Animation Slide animation describing the surgical procedure for Removal of one or both Testis (Orchiectomy) that is done for prostate cancer, torsion testis or testicular tumor.