Diabetes mellitus is a chronic, metabolic disorder characterized by elevated blood glucose levels, due to an absolute or relative insulin deficiency, and is associated with numerous complications including those involving the skin.

Bacterial infections in diabetes can take numerous forms. These include

The part of the skin involved by bacterial infection appears typically red, swollen and painful. These infections take longer to heal compared to infections occurring in non-diabetic individuals. This is because microbes thrive in a glucose-rich environment. Most of these infections need to be managed with antibiotics either as pills or topical applications such as creams.

The yeast-like fungus Candida albicans is responsible for a majority of fungal infections in diabetic patients. The infections occur in warm, moist areas of the skin such as beneath skin folds, and in the groin and axilla. The lesions consist of itchy rashes bordered by minute blisters and scales.

Management of these infections involve keeping these areas dry, and application of topical steroids and antifungal medications. Control of diabetes is critical to prevent recurrent infections.

Itching in diabetes can be due to various reasons such as fungal infections, dryness of skin or poor circulation. The lower limbs are most often affected when blood circulation is poor.

Some of the treatment methods involve:

This condition involves formation of light or white patches of the skin due to destruction of the cells that make melanin (a pigment responsible for skin coloration). It occurs more commonly in patients with type 1 diabetes.

These depigmented lesions occur mostly on the elbows, knees and hands. Other parts that may be affected include the areas around the mouth, the nostrils and eyes. They do not produce symptoms but can be distressing due to the cosmetic effect, especially in persons with darker skin.

5. Skin Changes due to Diabetic Neuropathy

Diabetic neuropathy refers to the symptoms caused by nerve damage. The high blood sugar levels are thought to damage nerve fibers by unknown mechanisms. Peripheral neuropathy causes symptoms like tingling and burning, and loss of sensations over extremities. Some people develop blisters that look like burn blisters. These lesions are called bullosis diabeticorum. Repeated injuries in insensitive areas can cause foot ulcers, infections, and subsequent deformities. The patient should protect the insensitive parts from injuries.

An allergic reaction in the form of rashes or bumps may occur to insulin. Patients taking insulin injections should look for such lesions in the injected area. Milder forms of allergic reactions may be treated with antihistamines. Severe reactions necessitate emergency treatment. In some cases, switching over to a different type of insulin might help.

These lesions appear as firm, yellow and pea sized bumps with red halos. They might be often itchy. They occur on the arms, legs and feet, back of hands and buttocks.

They occur when blood glucose levels are poorly controlled and the blood triglyceride levels are high.

Treatment involves control of blood sugar levels, and medications to bring down the lipid levels.

Digital sclerosis is a condition where the skin on the fingers and toes becomes thick, shiny and stretched. Joint stiffness may also occur.

Treatment involves better diabetic control, and application of moisturizers and creams to keep the skin soft.

These lesions are ring or arc shaped sharply delineated rashes that may be red, brown or even skin coloured. They are seen on the fingers and ears often, but can also occur on the skin of the abdomen and chest.

No treatment is necessary, though a topical steroid such as hydrocortisone can be beneficial.

It is seen in overweight people, and often precedes the onset of diabetes, and is in fact considered a marker of diabetes. It is thought to be a manifestation of insulin resistance.

The affected areas appear dark, thick and sometimes raised and have an appearance described as velvety. They can occur on the sides or back of the neck, armpits, beneath the breast, and groin.

The condition may improve with losing weight.

It is essential to keep the blood sugar under control. The following additional measures may also aid in skin care and prevention of complications. 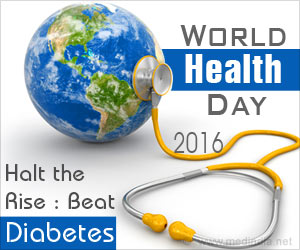 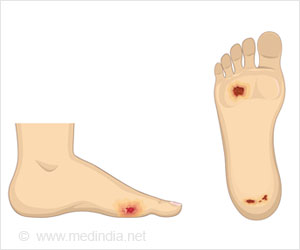 Foot Ulcer
Foot ulcer refers to an open ulcer on the foot. It may be superficial involving only the surface or deep involving the full thickness.
READ MORE
Sign up for Wellness Consult a Doctor Sign up for Selfcare