Obesity refers to a body mass index (BMI) of 30 or more. Body mass index measures the relation of a persons weight to his height. Obesity may be classified as follows -

Classes II and III are severe forms of obesity, and hard to treat with just diet and exercise.

Bariatric or weight loss surgery is undertaken to help reduce weight in severe cases of obesity, and to reduce the risk of potentially life threatening diseases related to obesity.

What are the Top 15 Health Benefits of Bariatric Surgery?

Bariatric surgery helps in weight loss, and alleviation of many of the health issues associated with obesity. Weight loss following bariatric surgery is typically expressed in terms of the percentage of excess weight shed by the patient.

Excess weight in a person refers to the number of pounds over and above the persons ideal weight. Some of the main benefits of bariatric surgery include the following -

Obesity is associated with an impaired quality of life, with lots of physical limitations, feeling of tiredness and body pain. Many patients who have undergone weight loss surgery report a better quality of life following the procedure.

Diabetes ranks as the leading cause of renal failure, and is responsible for lower-limb amputations not related to trauma, onset of blindness among adults, and is associated with an increased risk of heart disease high blood pressure, stroke, and nervous system disease.

The International Diabetes Federation has stated that bariatric surgery considerably improves glycemic control in obese persons having type 2 diabetes, especially in those unable to achieve effective control with lifestyle modifications and medications.

The American Diabetes Association recommends bariatric surgery as an option in persons with a BMI greater than 35, difficult to manage by conservative measures.

Obesity is a major risk factor for the development of NAFLD or non-alcoholic steatohepatitis (NASH), which is one of the most common causes for chronic liver disease worldwide.

The mainstay of treatment of obesity in NAFLD is lifestyle modification and weight loss.

Bariatric surgery has been found to be one of the most effective ways of retarding progression of NAFLD.

Obesity is linked to an increased incidence of high blood pressure (hypertension), and heart disease.

More than half of morbidly obese patients have dyslipidemia, and weight loss surgery led to a resolution of hyperlipidemia in about 60 percent of the patients.

In addition, bariatric surgery was associated with a significant reduction in risk of heart attack and stroke.

Most obese patients with OA develop pain in the weight bearing joints, and lower limb and back pain.

In patients with OA of the knee, weight loss surgery provided dramatic relief from pain, as early as three months post-surgery. Incidence of back pain also significantly decreased following surgery.

Many persons with severe obesity suffer from depression due to a poor body image and social stigma. They avoid participating in activities that they may enjoy and consequently become isolated and depressed. Bariatric surgery goes a long way in improving the emotional health of such persons.

Obstructive sleep apnea is characterized by snoring loudly, with long pauses in respiration during sleep. It is associated with an increased risk of heart attacks, blood pressure and inability to concentrate on work during the day.

Bariatric surgery considerably improves the symptoms of obstructive sleep apnea in over 85 percent of patients.

GERD or acid reflux is characterized by an incompetent lower esophageal sphincter, with splashing of stomach acid into lower esophagus. It leads to difficulty in swallowing, ulcers, scarring, and an increased incidence of esophageal cancer.

12. Reduction in Chances of Varicose Veins

Reduction of venous stasis  which causes painful ulcers and discoloration of skin of lower legs.

13. Reduction in Chances of Headaches

Once you reduce weight you tend to look smarter and younger.

Risk of mortality (death) was significantly reduced in persons with severe obesity who underwent bariatric surgery, compared to those who did not.

When is Bariatric Surgery Done?

Bariatric surgery promotes weight loss by either limiting the quantity of food the stomach can hold, or by causing reduced assimilation (malabsorption) of food, or by a combination of both.

The major amount of weight loss is noticed within the first two years of surgery. Most weight loss procedures nowadays are done by minimally invasive techniques (laparoscopic surgery). The most commonly performed bariatric surgery procedures include -

Adjustable gastric band  In this procedure, a ring with an inflatable band on its inner aspect is positioned around the top portion of the stomach, so that a smaller gastric pouch is created.

The ring has a circular balloon inside that can be inflated or deflated by injecting salt solution from the outside, thus adjusting the diameter of the opening from the pouch to the remaining portion of the stomach. Gastric band surgery is reversible in case the desired results are not produced or if any problems occur.

Sleeve gastrectomy  A portion of the stomach is removed, leaving behind only a vertical banana shaped portion that is then closed by stapling. This procedure limits the amount of food that the stomach can hold, and makes one feel full sooner. This procedure is irreversible.

Gastric bypass (Roux-en-Y bypass)  This is considered the gold standard of weight loss procedures. A small stomach pouch is created by separating the top of the stomach from the rest of the stomach using staples.

The next step involves division of the first part of the small intestine, with the lower end of the divided small intestine brought up and joined with the newly created small stomach pouch.

Biliopancreatic diversion with duodenal switch (BPD with DS) - In this procedure, a smaller, tubular stomach pouch is first produced by removing a part of the stomach, very similar to the sleeve gastrectomy. In the second step, a larger portion of the small intestine is bypassed to reduce more of the absorptive surface, thus limiting even more the amount of food assimilated.

The BPD/DS is regarded as the most effective procedure to manage severe obesity complicated by diabetes.

Other procedures that are still in the investigational stage include ileal transposition and duodeno -jejunal bypass.

Weight loss surgery may be associated with complications, both immediate as well as long-term. 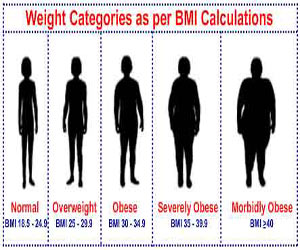 Bariatric Surgery - Short Term and Long Term Outcomes
The benefits of bariatric surgery outweigh its side-effects. With the surgery you can lose 45 to 60% of the original weight and this has benefits on blood sugar, sleep and heart disease.
READ MORE
Sign up for Wellness Consult a Doctor Sign up for Selfcare