Tonsil stones or tonsilloliths are deposits of calcified debris of bacterial cells, lymphocytes, and food particles in the tonsils that cause bad breath

What are Tonsil Stones?

Tonsil stones, also called tonsilloliths, are clumps of calcified material that are deposited on or within the tonsils, the fleshy pads located at the back of the throat. The calcified aggregates are hard and appear white or yellowish. These are essentially made up of dead bacteria and cellular debris that have become lodged within the crypts of the tonsils, particularly the palatine tonsils and to a lesser extent in the lingual tonsils.(1✔ ✔Trusted Source
Tonsillolith

The tonsils consist of an aggregation of lymphoid tissue that lines the junction of the oropharynx and nasopharynx at the back of the throat. The tonsillar tissues are rich in lymphocytes, particularly B-lymphocytes, which are components of the immune system that guard against entry of infectious microbes within the aero-digestive tracts. Therefore, the B-cells not only prevent but also fight infections.

The tonsils consist of a ring of lymphoid tissue called Waldeyers ring, which consists of the following components:

While speaking of tonsils, it usually refers to the palatine tonsils. The tonsils have many infiltrating microscopic channels, called crypts that penetrate within the tissue. The tonsils are designed to protect against onslaught by infectious agents such as bacteria and viruses. However, due to accumulation of debris within the crypts, they can become a nuisance, being a cause of bad breath (halitosis), thereby warranting treatment. Research has indicated that people, who have had their tonsils surgically removed, are at no extra risk of infections than people with intact tonsils.

What are the Causes of Tonsil Stones?

Tonsil stones are primarily caused by accumulation of dirt, mucus, cell debris from dead bacteria and lymphocytes, and remnants of food particles that get lodged within the crypts of the tonsils. These become hard due to calcification and emit a foul smell, which is technically termed as halitosis. Other factors that can facilitate the process of formation of tonsil stones include the following: 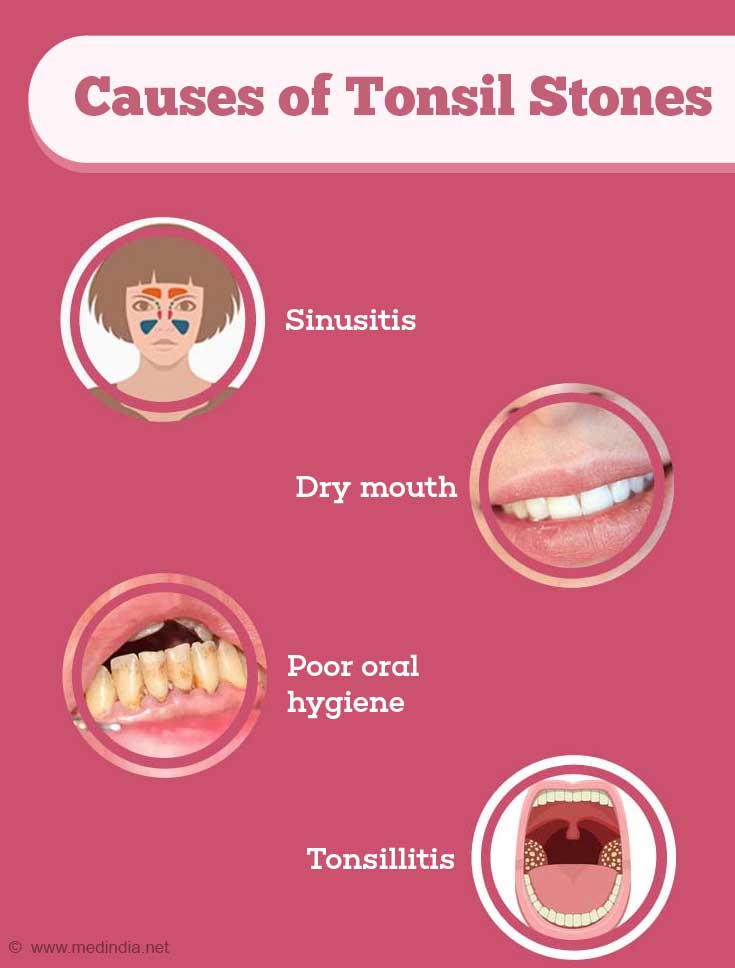 Sinusitis and Allergic Reactions: Sinusitis (inflammation of the sinus glands) and allergic reactions can result in build-up of mucus that can drain into the nasopharynx area and end-up in the tonsillar pockets, causing further formation of tonsil stones.

Dry Mouth: The mouth can become dry due to absence of salivary secretion, as can occur due to consumption of certain medicines such as antihypertensives. Absence of saliva means the absence of antibacterial agents and enzymes, thereby encouraging the growth of bacteria, which can lead to formation of tonsil stones.

Tonsillitis: Inflammation of the tonsils (tonsillitis), especially if its chronic, can encourage the formation of tonsil stones due to accumulation of dead cell debris from inflammatory reactions within the tonsils.

What are the Symptoms & Signs of Tonsil Stones?

Tonsil stones are generally asymptomatic, particularly if they are small in size. However, larger stones can exhibit the following symptoms: 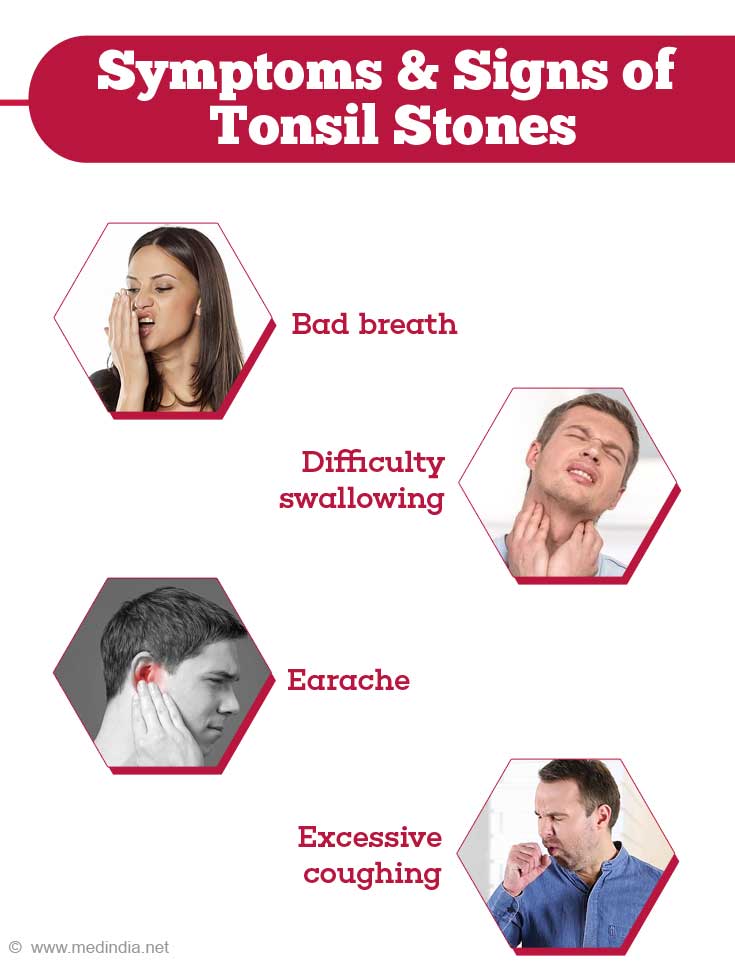 How do you Diagnose Tonsil Stones?

Diagnosis of tonsil stones is very difficult, given that most cases are asymptomatic, particularly in case of small stones. Symptomatic cases can be diagnosed by direct visual inspection of the oral cavity. Certain symptoms like halitosis can raise the physicians suspicion that tonsil stones may be present. If the stones are on the surface of the tonsils, they can be relatively easy to diagnose. However, if they are located deep within the tonsillar tissue, imaging techniques may be required, including X-rays or computed tomography (CT) scans. However, these are rarely used for diagnosis of tonsil stones, which are found accidentally in imaging studies for other purposes.(3✔ ✔Trusted Source
Tonsil Stones

How do you Treat Tonsil Stones?

Treatment is not usually required if the stones are very small and asymptomatic. However, if there are symptoms, there is a need for intervention. The following approaches may be adopted:

Saline Gargle: Gargling vigorously with lukewarm saline water is useful in expelling small stones that may be lodged near the surface of the tonsils. About half teaspoon of salt dissolved in a cup of warm water can be used for gargling. Salt water gargle can appreciably decrease bad breath. 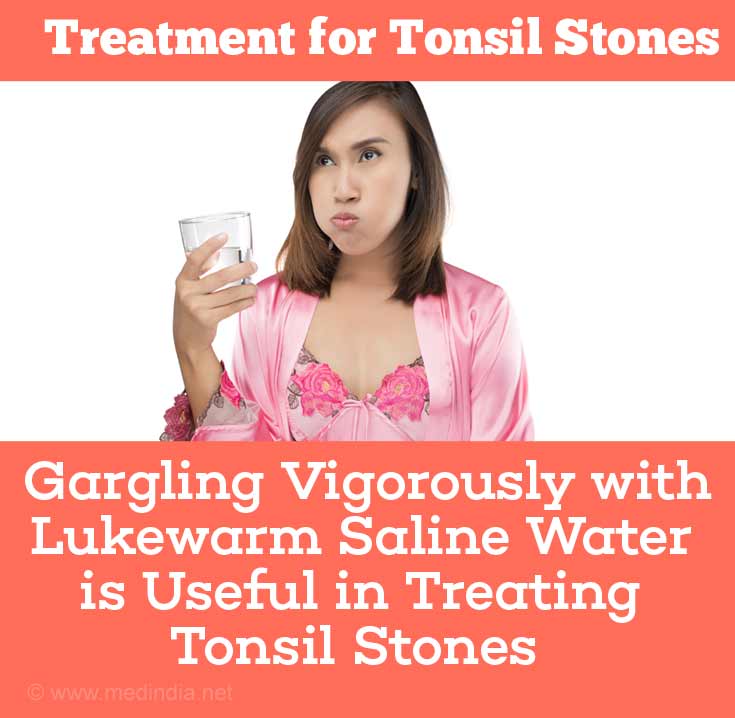 Manual Methods: Manual methods of extraction include simply using the tongue to dislodge any tonsil stones. This method is convenient since it does not elicit the gag reflex. Irrigation of the tonsils with a jet of water or scraping with a cotton bud can also be done. A medicine dropper can be used in conjunction with saline water irrigation to dislodge the tonsil stones. Tweezers can also be used to extract the stones. Larger stones may need to be removed by curettage, which is commonly known as scooping.

Laser Cryptolysis: This method is also known as laser resurfacing. It uses a scanned carbon dioxide laser to reduce the surface area by sealing-off the crypts, thereby smoothening the surface of the tonsils. The laser beam flattens the edges of the crypts thereby preventing cellular debris from accumulating. The procedure can be performed under local anesthesia.

Coblation Cryptolysis: This technique is less invasive than laser cryptolysis. Unlike lasers, no heat is generated. Here, radio waves transform a salt solution into charged ions that can be used to cut through the tonsillar tissue to seal-off the crypts, in much the same way as laser cryptolysis, but without any burning sensation.

Antibiotic Therapy: Antibiotics can be used to treat tonsil stones by killing the bacteria in the oral cavity. However, antibiotics are generally not recommended since they have their own side-effects. Moreover, they cannot correct the underlying cause that is responsible for the formation of tonsilloliths.

Tonsillectomy: Surgical removal of the tonsils is known as tonsillectomy. Tonsillectomy is not generally recommended as a treatment for tonsil stones. It is only used in extremely rare instances, where all other strategies have failed.(4✔ ✔Trusted Source
A Giant Tonsillolith

What are the Preventive Measures for Tonsil Stones?

The following measures can be adopted to prevent the occurrence of tonsil stones:

Maintaining Hydration: Drinking a lot of water is recommended to keep the body well-hydrated. This can prevent the occurrence of tonsil stones.

Halitosis Halitosis is an embarrassing condition that affects a person's self confidence. It is usually caused by bad oral hygiene.

Tonsillitis In Tonsillitis the tonsils are inflamed and swollen and it usually occurs due to bacterial or viral infection.
Sign up for Wellness Consult a Doctor Sign up for Selfcare
Advertisement
Health Topics A - Z
A B C D E F G H I J K L M N O P Q R S T U V W X Y Z

How to Choose the Best Eczema-Friendly Moisturizer for Children?
View all
Tonsil Stones - Related News
New Tonsillectomy Procedure Inducing Reduced Postoperative Pain and Bleeding
Tonsillectomy - Not Worth The Money Or The Pain
Tonsillectomy Could Lead To Obesity In Children
More News