What is Subungual Melanoma?

Melanoma is skin cancer arising from skin melanocytes (melanin pigment-producing cells). Subungual (under the nail) melanoma is a rare skin cancer constituting 0.7% to 3.5% of all malignant melanomas. This form of cancer is a variant of acral lentiginous melanoma, a malignant cancer of the soles and palms. The toe and thumb are the most commonly affected (75% to 90%) digits in subungual melanoma.

Subungual melanoma develops as a brown-black pigmented band in the nail matrix and appears initially at the nail fold (edge of the nail with the skin). The band slowly widens and the growth tends to shift the nail from its position with concurrent bleeding. If detected early, the condition can be treated immediately with a good outcome (prognosis) and the cancer can be halted and even reversed.

What are the Causes of Black-brown Vertical Lines in the Nail Plate?

Melanoma within the nail is a result of activated melanocytes that multiply in the nail matrix and begin to spread to the nail. The exact cause of melanoma is not known though ultra-violent radiation is a risk factor for its development. However, this may not be the cause for fingernail melanoma.

The cause of black-brown vertical lines in the nail plate that may mimic melanoma of fingernail include:

All the above are benign conditions and should not be confused with cancer or melanoma of the nail plate. If you are worried, please check with your doctor.

One should also remember that melanoma can affect the palms of the hands or the soles of the feet too and is more common in people with darker skin. 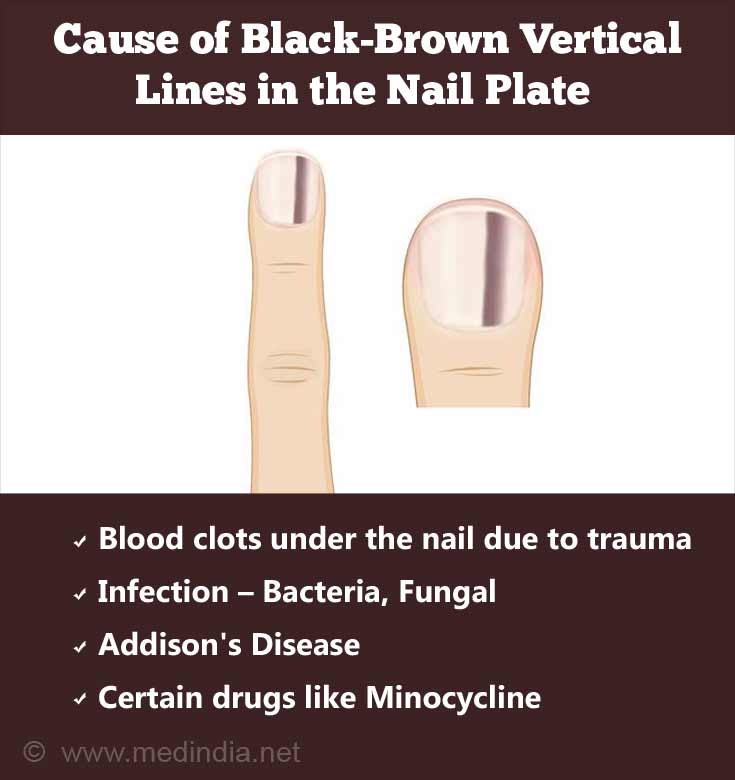 What are the Symptoms & Signs of Subungual Melanoma?

The initial signs of subungual melanoma are streaks or black-brown bands on the nail bed. The pigmentation may be irregular. Subsequently, the nail thickens, may split or is completely damaged resulting in swelling, pain, pus secretion and discoloration of the surrounding region.

A characteristic sign (Hutchinson sign) of subungual melanoma is the spread of melanin pigment from the nail to the surrounding skin.

What are the Consequences of Subungual Melanoma?

How do you Diagnose Subungual Melanoma? 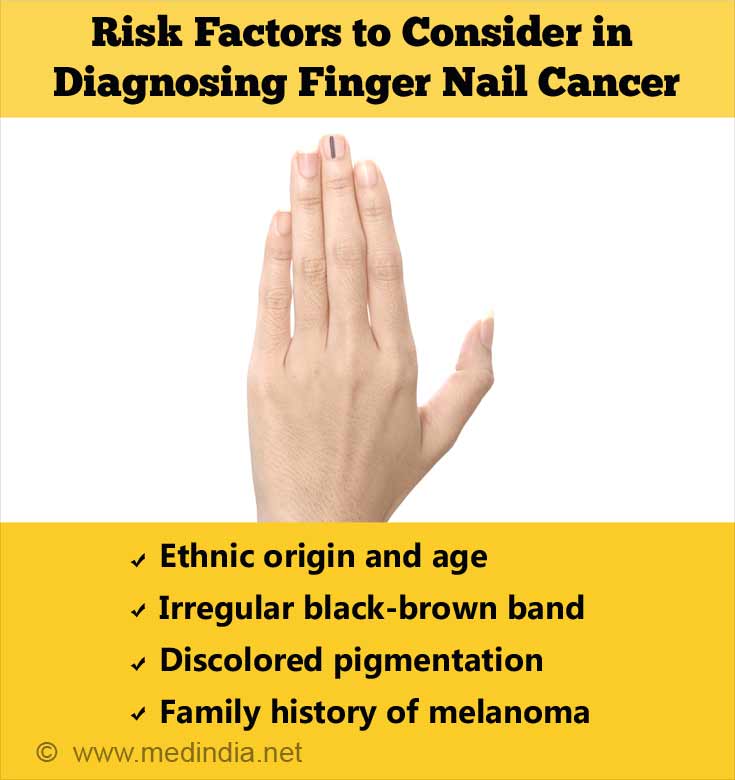 In order to accurately diagnose subungual melanoma, it is important to follow the above guidelines, compare the lesions with earlier photographic evidence, and immediately excise (cut out entirely) suspicious lesions. The tissue pathology of the nail shows an increased number of melanocytes. The metastatic cases exhibit a 2- to 3-fold increase in the number of melanocytes compared with benign cases.

Nail dermoscopy (onychoscopy) is a noninvasive method to differentiate between benign and advanced cases of cancer. It also confirms longitudinal melanonychia. However, intraoperative direct matrix dermoscopy is invasive and helps to determine if nail biopsy or excision is required.

There are 2 clear ways to confirm subungual melanoma.

How do you Treat Subungual Melanoma?

Most often, subungual melanoma is misdiagnosed as infection due to a hematoma (swelling due to blood clot), a fungal infection, trauma, or a mole on the skin. This affects the survival outcome.

Lymph nodes, if they are palpable, should be analyzed with imaging. Biopsy may or may not be carried out. If the disease is identified, lymph nodes need to be dissected. Lymph node biopsies are performed on lesions that are 1mm to 4 mm in thickness. If the thickness exceeds 4 mm, brain MRI scans and CT-PET imaging is used to stage the tumor.

Immunotherapy and radiotherapy are utilized only in specific cases. Radiotherapy is used on lymph nodes with large lymphadenectomy.

How to Prevent Subungual Melanoma?

Unfortunately, subungual melanoma is always diagnosed in the late stages. Ideally, patients and family physicians should be vigilant and try to diagnose the condition early. If the pigmentation does not respond to traditional forms of treatment, a dermatologist should be consulted to avoid the condition from progressing to the advanced stage.

Close inspection and vigilance are very important in recognizing subungual melanoma with the least amount of delay.

Melanoma Melanoma is a dangerous form of skin cancer caused largely due to exposure to the sun's damaging UV rays. It commonly arises from new or pre-existing moles.

Nails - Health and Disease Nail changes could indicate a health problem or a disease condition. Read more to know about what your nails say about your health.

Nail Infections Caused by Manicures It is important to have manicured hands for a chic look, it is more important to have healthy nails.
Sign up for Wellness Consult a Doctor Sign up for Selfcare
Advertisement
Health Topics A - Z
A B C D E F G H I J K L M N O P Q R S T U V W X Y Z

How to Choose the Best Eczema-Friendly Moisturizer for Children?
View all
Advertisement