What is Stereotypic Movement Disorder?

Stereotypic movement disorder (SMD) is usually a childhood behavioral disorder, characterized by common repetitive movements, including hand waving, thumb sucking, hand biting, body rocking, head banging, among others. These abnormal movements are more common in boys than girls and usually occur within the first 3 years of life. Stress, boredom, excitement, frustration, or exhaustion can aggravate the condition. These types of abnormal behavior are unintentional and purposeless, which can actually cause physical injury to the child.

As per the 5 revision of the Diagnostic and Statistical Manual of Mental Disorders (DSM-5), SMD is classified under the category of neurodevelopmental disorders, as a motor (movement) disorder. Simple stereotypic movements such as rocking are quite common in normal infants, which should not be confused with SMD. However, complex stereotypic movements are far less common and typically occur in only about 3-4% of children. These types of motor stereotypies are often associated with intellectual disabilities or neurodevelopmental conditions, but can also occur in normal children.

What are the Causes of Stereotypic Movement Disorder?

The exact cause of this disorder is still unknown, although there is increasing evidence to support a neurobiological mechanism. Several factors have been identified that may trigger SMD, which include the following: 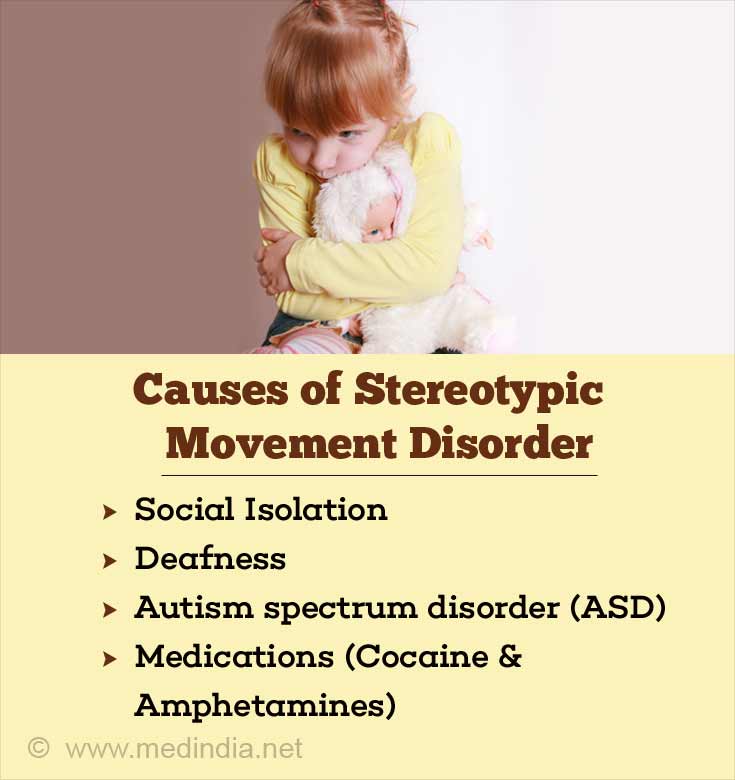 What are the Symptoms & Signs of Stereotypic Movement Disorder?

A person suffering from SMD can be distinguished from a normal person by the following symptoms and signs: 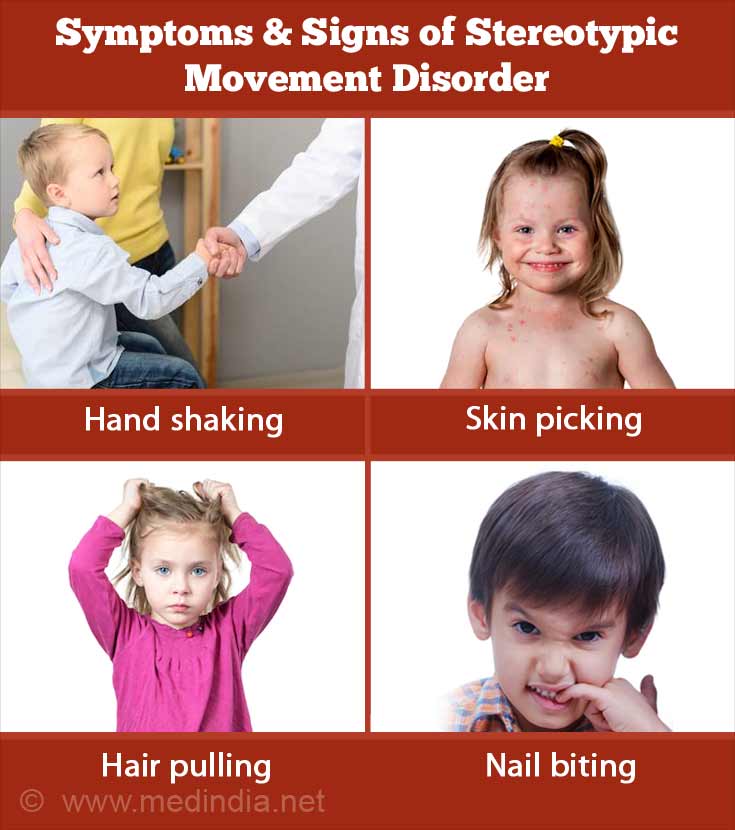 How do you Diagnose Stereotypic Movement Disorder?

Diagnosis can usually be made by taking a detailed medical history, followed by a thorough physical examination. However, since there are several disorders that exhibit similar symptoms, these must be included within the differential diagnosis. Tests, including neuroimaging studies, are usually carried out to eliminate these disorders from the differential diagnosis. Some of these disorders include the following:

How do you Treat Stereotypic Movement Disorder?

Treatment will depend on several factors like the cause(s) of the disorder, symptoms and signs, and the age of the patient. As a rule of thumb, early diagnosis and treatment can lead to better outcomes. Some of the treatment strategies include the following:

What are the Risk Factors of Stereotypic Movement Disorder?

Children having the following conditions are at a greater risk of developing SMD:

What are the Complications of Stereotypic Movement Disorder?

The major complications of stereotypic movements exhibited by children with SMD is that they can severely impair day-to-day activities as well as hamper normal social functioning.

Rett Syndrome - Symptoms
Loss of speech and purposeful hand movements are the most common symptoms of Rett syndrome.

Research: Low-Dose Sedative Alleviates Autistic-like Behavior in Mice With Dravet Syndrome Mutation
A new study has found that autistic-like behavior in mice with genetic mutation that leads to Dravet syndrome in humans could be alleviated by using a low dose of clonazepam

PCOS In The Mother Increases Risk Of Autism In The Offspring
Women with polycystic ovarian syndrome (PCOS) have increased levels of androgens even during pregnancy, which increases the risk of autism in children.

Experimental Drug Improves Social Function in Fragile X Syndrome
An investigational compound is found to be effective in treating social withdrawal in fragile X syndrome and potentially the first for autism spectrum disorder.

Finding By Stanford Study Suggests That Antioxidant Shows Promise as Treatment for Certain Features of Autism
According to a pilot trial that involved 31 children with the disorder, a specific antioxidant supplement may be an effective therapy for some features of autism.
Sign up for Wellness Consult a Doctor Sign up for Selfcare
Advertisement
Health Topics A - Z
A B C D E F G H I J K L M N O P Q R S T U V W X Y Z