Spermatocele is a condition in which there is a blockage in the epididymal duct, resulting in semen collection and formation of a cyst

Spermatocele, also known as an epididymal cyst, is a sperm (semen) filled cyst that is present in the upper part at the backside of the testes. The cyst is present in the epididymis, the convoluted tubule that originates in the testes and carries sperms to the outside. The spermatocele is usually a painless, benign (non-cancerous) mass that contain sperms. It is not a serious medical problem but may be bothersome and a nuisance for the patient. It usually occurs in the age group 20-50 years.

Anatomy & Physiology of the Male Reproductive System in Brief

The male reproductive system consists structures that facilitate the transfer of sperms to the female for the purpose of reproduction.

The testes are oval bodies and are the primary site where the sperms develop and mature. The testes also produce testosterone, the male sex hormone. There are two testes, one on either side and are placed within a sac called scrotum, which provides protection to the testes. Another function of the scrotum is to provide the optimal temperature for sperm development. When the temperature is high it hangs down more to provide a cooler environment and if the temperature is low, the scrotal muscles contract and bring the testes closer to the body to provide warmth.

The epididymis is a long, highly convoluted tubule that provides the environment for the sperms to mature and develop the ability to swim. This opens into the next part  the vas deferens.

The vas deferens transports the sperms to the urethra. One vas deferens from either side passes behind the prostate gland and joins with the seminal vesicles. The vas deferens is intertwined with muscles, nerves and blood vessels, collectively forming the spermatic cord.

The secretions from the prostate and seminal vesicles nourish the sperms and form the major volume of semen, the fluid (containing the sperms) that is ejaculated into the female genital tract. Besides this, an alkaline mucus secretion produced by the Cowpers glands is also added to the semen.

The urethra has a dual role since it is a part of the urinary system as well as the reproductive system. It carries urine from the urinary bladder to the outside, as well as the semen during ejaculation. The urethra is continuous with the penis that is the external structure that transfers the sperms into the female genital tract.

What are the Causes of Spermatocele?

The exact cause of a spermatocele is not known. It occurs due to blockage in the epididymal ducts that carry sperms from the testes. Infections and inflammation of the epididymis (epididymitis), physical injury, and vasectomy can also play a role in the pathogenesis of spermatoceles. Research into the possible etiology of spermatoceles is ongoing.

What are the Symptoms and Signs of Spermatocele?

The condition does not usually exhibit any symptoms and signs. However, the following symptoms can be observed if the spermatocele becomes large in size:

It should be noted that the symptoms of a spermatocele can mask other possible underlying conditions such as cancer, varicoceles, hematoceles, as well as testicular torsion resulting from rotation and twisting of the testes within the scrotal sac. 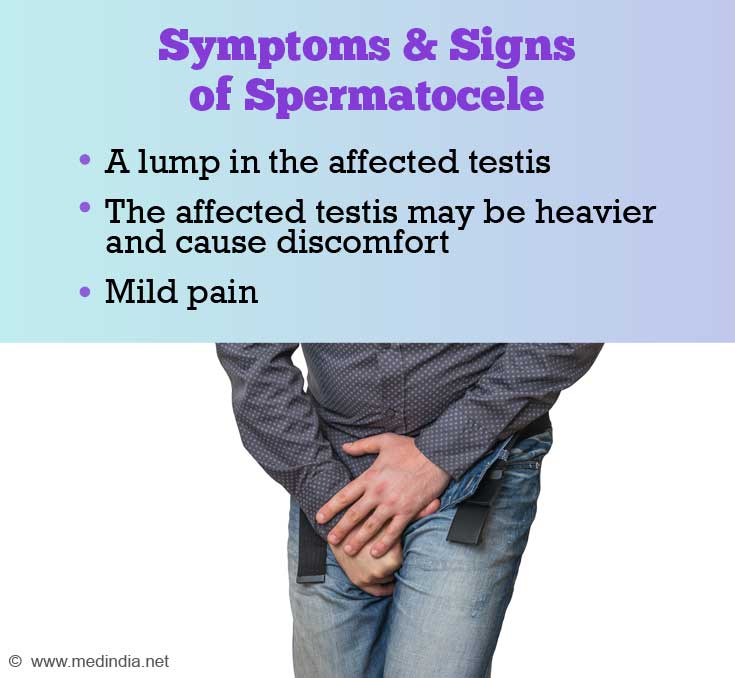 How do you Diagnose Spermatocele?

A spermatocele can be discovered by self-examination or during a health check-up. The doctor usually uses the following approaches for the diagnosis of a spermatocele: 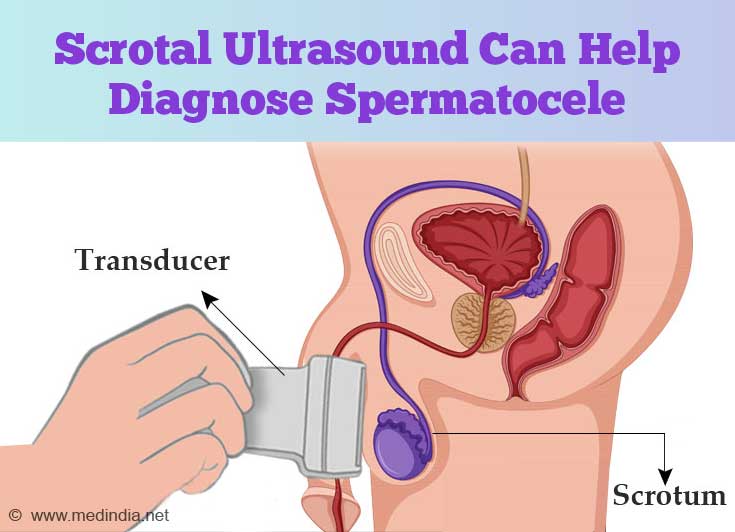 How do you Treat Spermatocele?

Spermatoceles are better left alone if the size is stable. However, if the lump continuously increases in size and is symptomatic to the patient then various treatment approaches may be adopted.

Medications: For pain and inflammation, the patient is usually prescribed painkillers like paracetamol and non-steroidal anti-inflammatory drugs (NSAIDs) like ibuprofen. These two drugs are also available as a combination.

Invasive Techniques: The invasive techniques include aspiration, sclerotherapy, and spermatocelectomy.

How do you Prevent Spermatocele?

There is generally no way to prevent a spermatocele from occurring. However, regular self-exams can detect the condition at an early stage so that treatment measures can be instituted as soon as possible

Journey of the Male Sperm - Animation
Interactive section of Medindia explains the journey of the sperm from testis to the outside world.

Testicular Biopsy
In a testicular biopsy, a small bit of testicular tissue is removed from the testes and examined microscopically for any evidence of disease.
Sign up for Wellness Consult a Doctor Sign up for Selfcare
Advertisement
Health Topics A - Z
A B C D E F G H I J K L M N O P Q R S T U V W X Y Z

Dietary Factors Responsible for Dihydrotestosterone (DHT) Production and Hair Loss
View all
Spermatocele - Related News
Dr. Kamala Selvaraj - A Pioneer in Infertility Treatment
Diabetes Damages the Nerves of the Reproductive System Causing Infertility Among Males
Diabetes Can Cause Infertility in Both Women and Men
More News