PUVA or photochemotherapy is used to treat several skin disorders with the help of UV light and the drug psoralen.

What is PUVA Therapy?

PUVA is a combination treatment which consists of psoralen taken orally or applied to the skin followed by exposure of the skin to long wave ultraviolet A (UVA) radiation. It is used for the treatment of certain types of skin diseases.

Psoralen is a drug that makes the skin temporarily sensitive to UVA. The ultraviolet light is emitted by special fluorescent light tubes. The treatment is given in a hospital set up, and cannot be administered at home. The treatment may require a variable number of sittings, depending on the condition being treated and its severity.

What is PUVA Therapy Used for?

PUVA therapy is used for the treatment of a number of skin diseases which include psoriasis, eczema, atopic dermatitis, cutaneous T-cell lymphoma, vitiligo, graft-versus-host disease, and polymorphic light eruptions. However, due to its disadvantages and side effects, it is recommended only when other treatments fail. 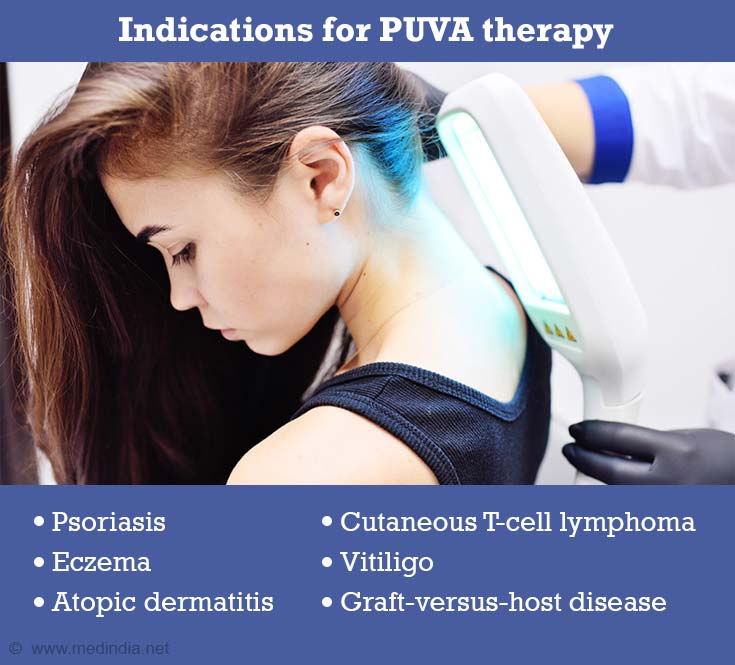 How is PUVA Therapy Administered?

PUVA can be used for both, the whole body and local (hand and foot) treatments. First, the psoralen is administered orally or is applied to the required part of the skin. In some cases, the patient soaks in a bath that contains psoralen. After approximately 2 hours after the oral intake of the psoralen when the drug has reached the skin, the UVA treatment is administered.

In case of whole body PUVA therapy, the patient stands undressed in a specially designed cabinet containing fluorescent light tubes. When a specific area is treated, only the affected hand or leg is exposed to the radiation. Sensitive body parts such as the face, eyes, breast, and genitals are covered to protect them from the potential carcinogenic effect of the UV radiation.

How Safe is PUVA Therapy?

PUVA is recommended only when other treatments fail to benefit the patient because of its side effects. However, acute treatments given by trained professionals, with accurate dose, duration, and schedule are usually safe and have been beneficial to patients suffering from chronic skin diseases. Minor side effects such as burning, itching, or redness can be managed with topical treatments.

Though it is not clear whether PUVA therapy affects the developing baby during pregnancy, couples are advised to avoid planning a family while on PUVA therapy or stop the therapy immediately if pregnancy is confirmed.

What are the Side Effects of PUVA Therapy?

The side effects of PUVA therapy include the following:

Treatment for Vitiligo Corticosteroids are effective agents to bring repigmentation of the skin. Calcipotriene (Dovonex), a vitamin D derivative is sometimes used with corticosteroids or ultraviolet light.