It is a group of inherited metabolic disorders in which fatty substances cholesterol and lipids accumulate in lysosomes, leading to organ damage cells.

What is Niemann-Pick Disease?

Niemann-Pick disease is a group of inherited metabolic disorders in which cholesterol and fatty substances called lipids collect in the lysosomes because the body is unable to metabolize them. It belongs to a group of more than 50 disorders called lysosomal storage diseases.

Lysosomes are membrane-bound compartments within cells that contain enzymes to break down large molecules such as proteins, carbohydrates and fats into their building blocks. If there is abnormal functioning of an enzyme, the body is unable to metabolize cholesterol and other fatty substances (lipids) inside of cells; this leads to their accumulation in various tissues of the body, including brain tissue. Cells then malfunction and die leading to organ damage.

Organelles that can get affected in Niemann-Pick disease are the brain, nerves, liver, spleen, bone marrow and, in severe cases, lungs.

The disease can occur at any age but mainly affects children. There is no known cure for the disease and it can be fatal sometimes. Hence treatment is focused on helping people live with their symptoms.

What are the Types of Niemann-Pick Disease?

Niemann-Pick disease is currently classified into two types. Older classification had types A, B, C and D.

Facts and Statistics on Niemann-Pick Disease

What are the Causes of Niemann-Pick Disease?

Niemann-Pick disease types A and B arise due to mutations in the SMPD1 gene. It is a hereditary disease that inherits in an autosomal recessive pattern. This gene is required by the cells to produce an enzyme called acid sphingomyelinase (ASM). Changes in the structure of this gene (mutations) lead to deficiency of the enzyme. As a result of this a fatty substance called sphingomyelin (normally digested by the enzyme) cannot be metabolized properly and is accumulated within the cell. This ultimately leads to cell death and the malfunction of major organ systems.

Patients with Niemann-Pick disease, type C are known to share specific mutations in NPC 1 and NPC2 genes. These mutations disrupt the bodys cholesterol and glycolipid transport mechanisms leading to the abnormal accumulation of these entities. 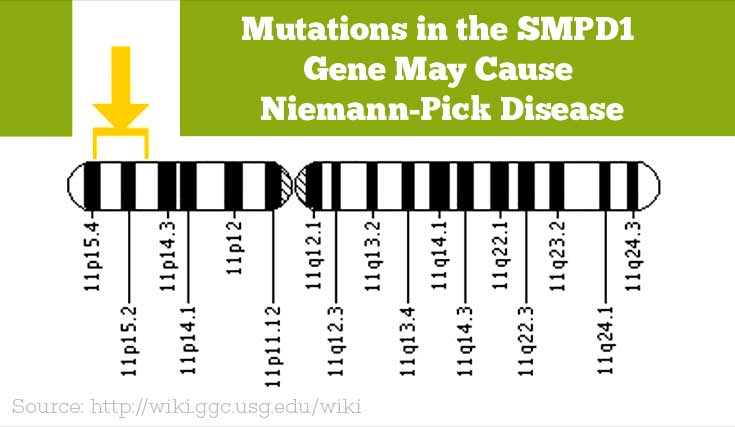 What is the Inheritance of Niemann-Pick Disease?

Niemann-Pick disease is a hereditary disease that inherits in an autosomal recessive pattern, i.e. two copies of an abnormal gene must be present in order for the disease to develop. The parents of a child with an autosomal recessive disorder do not have the disease clinically in most cases though they carry one copy of the altered gene. This state is referred to as the carrier state. If both parents are carriers, there is a 25% chance with each pregnancy for an affected child.

What are the Signs and Symptoms of Niemann-Pick Disease?

Symptoms of Type A

These usually begin in the first few months of life and include:

Symptoms of Type B

There is almost no brain and nervous system involvement in Niemann-Pick disease type B. Symptoms are usually milder and occur in late childhood or adolescence. Abdominal distension and repeated respiratory infections are common. 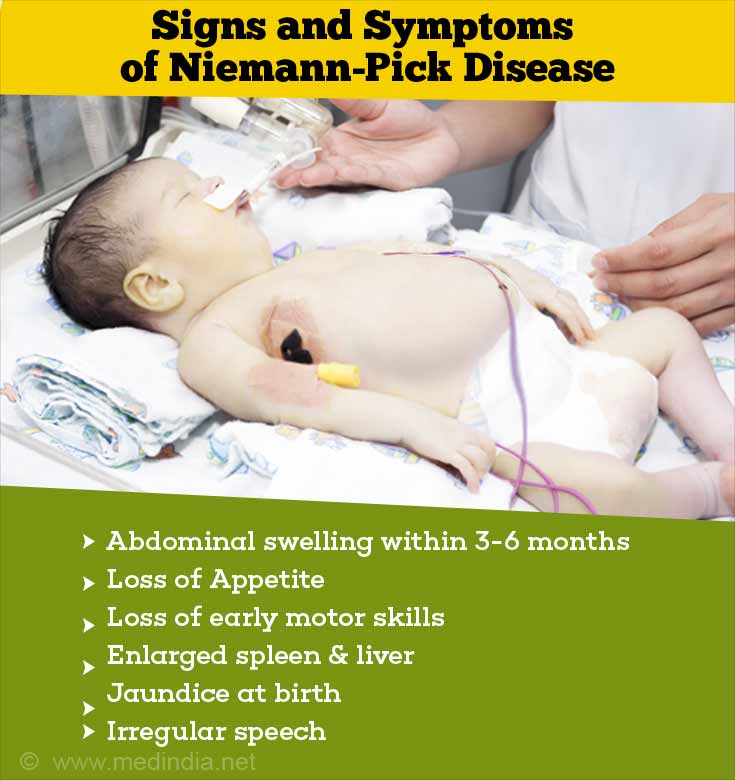 What is the Diagnosis for Niemann-Pick Disease?

Other tests employed include:

Techniques like chorionic villus sampling or amniocentesis can be used for ante natal diagnoses. After birth, the diagnosis can be made by a liver biopsy where liver tissue specimens are studied under a microscope.

What are the Complications of Niemann-Pick Disease?

What is the Treatment for Niemann-Pick Disease?

None of the types of Niemann-Pick disease can be cured completely. Treatments are limited and thrive on supportive measures. Type A disease has no effective treatment currently. Enzyme replacement therapy, bone marrow transplantation, and gene therapy are being studied for type B disease. New drugs like miglustat have started to make appearance in the treatment of type C disease. Miglustat inhibits glucosylceramide synthase, an enzyme that takes part in the synthesis of glycosphingolipids, whose accumulation occurs excessively in Niemann-Pick disease.

Although Niemann-Pick disease does not have a complete cure yet, new treatments that halt the disease progression are being studied. Affected children tend to die of infection or progressive dysfunction of the central nervous system.

What is the Prognosis of Niemann-Pick Disease?

Niemann-Pick is a fatal disease, the most serious form being type A disease. Children with type A disease do not usually survive beyond the age of 2 or 3 years. Type B patients may live into late childhood or adulthood.

Chemical Chaperone may Be a Treatment Option for Neurological Disorders Researchers at Washington University School of Medicine in St. Louis have come up with a new treatment method for Niemann-Pick disease, a rare, deadly neurodegenerative disorder.

Blood Test to Simplify Diagnosis of Deadly Niemann-Pick Type C Disease A fatal genetic disorder that frequently takes years to diagnose may soon be detectable with a simple blood test, researchers at Washington University School of Medicine in St.

Basics of Rare Diseases Rare or orphan diseases are least understood of all chronic diseases. They are more common than projected and kill more people than cancer and HIV together.