What is Necrotizing Fasciitis?

Necrotizing fasciitis is classified based on the infecting microorganism.

What are the Causes of Necrotizing Fasciitis?

Necrotizing fasciitis is caused mainly by the following organisms. More than one organism may also be identified on culture of the wound:

Other microorganisms responsible for the infection are: 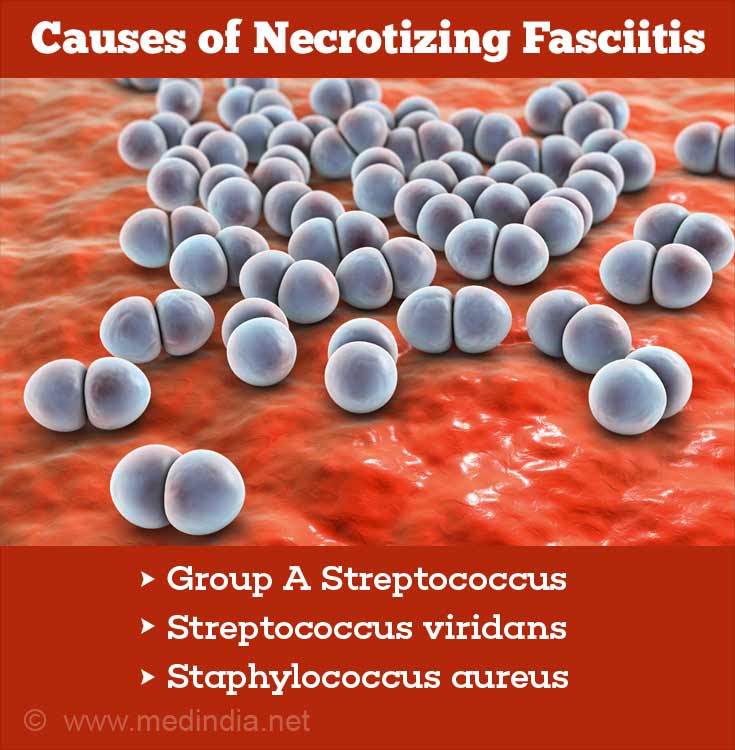 What are the Risk Factors of Necrotizing Fasciitis? 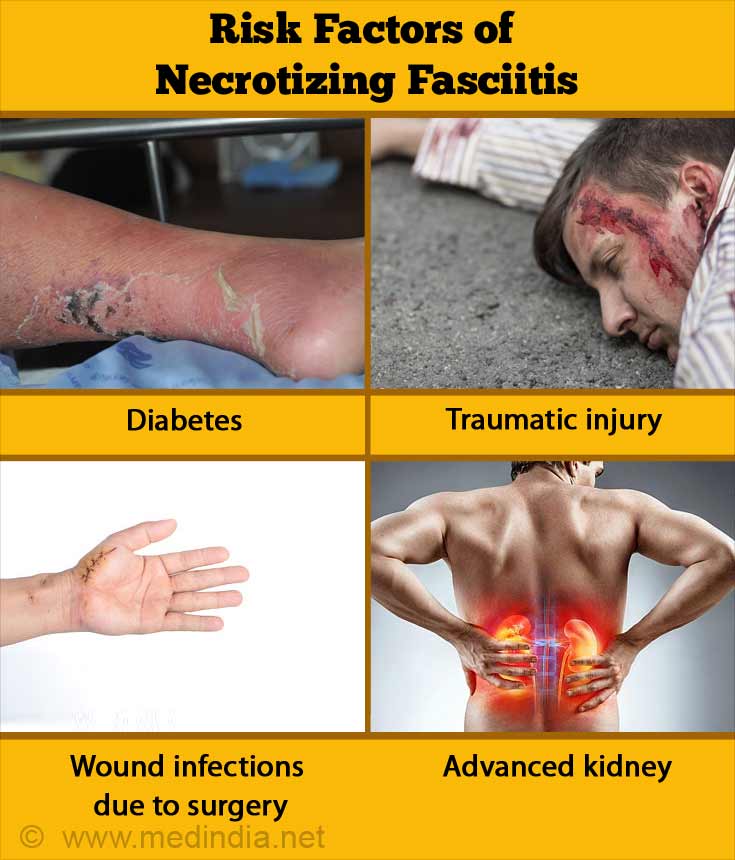 What are the Symptoms & Signs of Necrotizing Fasciitis?

Necrotizing fasciitis is observed in the extremities, groin, genital areas, and abdomen. In the beginning, the person notices symptoms within a space of a few hours of the injury. Initially, it appears as a skin condition that does not appear to be serious. These initial symptoms which should raise a clinical suspicion include:

Symptoms that appear later in 2-3 days with fast deterioration of the patient, are: 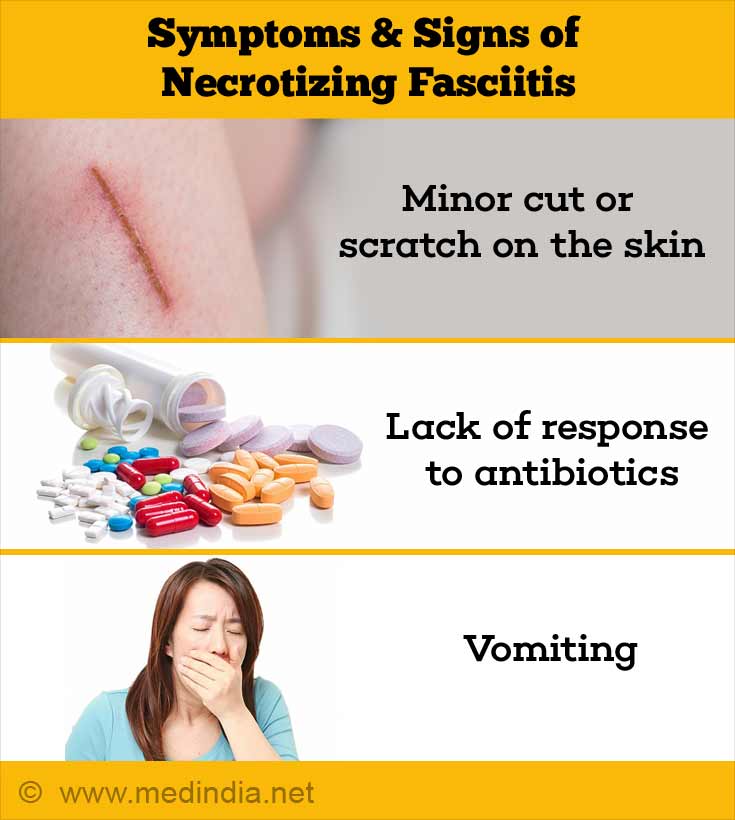 Critical symptoms manifest within 4 to 5 days

In most cases, necrotizing fasciitis develops swiftly but in certain cases, the disease gradually progresses. However, delayed treatment may result in confusion, dizziness, and weakness.

What are the Consequences of Necrotizing Fasciitis?

Necrotizing fasciitis can be lethal if not diagnosed and treated early. In fatal cases, kidney failure, respiratory failure, septic shock, and multiorgan failure cause death.

How do you Diagnose Necrotizing Fasciitis?

Your family physician will conduct a medical examination based on the symptoms. The success rate for an accurate diagnosis is only 15% - 34%.

A high index of suspicion about the condition is necessary and diagnosis is often missed in the early stages. Most clinicians may not be familiar with the condition

It should be suspected when the patient presents with skin swelling, pain and redness especially if the patient has history of diabetes, alcoholism or chronic kidney disease.

Early referral for surgery is essential if there is any doubt. Investigations can be delayed if they could delay surgical intervention in a patient with suspected necrotizing fasciitis

During surgery, diagnosis is made based on the appearance which include greyish black dead tissue, lack of bleeding, thin dishwater pus' unlike usual thick foul smelling pus, lack of resistance when the tissues are probed with the finger and muscle that does not contract in response to stimulus.

What are the Investigations of Necrotizing Fasciitis?

The following tests may help diagnose the presence of necrotizing infection but only surgery offers a definitive diagnosis.

Bedside Finger test: In the finger test, tissues show lack of resistance to the finger when they are touched. The test is performed under local anesthesia with a 2 cm cut extending to the below to the soft tissue under the skin

Imaging: CT scans, MRI, ultrasonography, and radiography are used to diagnose NF. However, radiography is not quite specific and only helps to identify gas formation within the layers of the skin.

Microbiological tests: Blood culture, and wound swabs will confirm the organism. Fungal culture should be performed in immunodeficient patients.

How can you Treat Necrotizing Fasciitis?

A combination of surgery, antibiotics, and oxygenation of infected regions is used to treat NF. It is important to diagnose and treat NF as soon as possible to avoid the condition from turning fatal.

Clostridium perfringens infection is treated with penicillin G with or without hyperbaric oxygen therapy.

For K pneumoniae infection, ticarcillin/clavulanate, piperacillin/tazobactam or carbapenems is used in combination with aminoglycosides as treatment.

How is Necrotizing Fasciitis Prevented?

MRSA - The Super Bug - Symptoms and Signs
If you have a pus-oozing infection that is taking time to heal consult your doctor, as you maybe infected by the superbug -MRSAn spreads to other body parts it could be life-threatening.

Cellulitis
Cellulitis is a bacterial infection of the skin and subcutaneous tissues that affects all age groups. Erysipelas, necrotizing fasciitis, and periorbital cellulitis are the 3 types of cellulitis.
Sign up for Wellness Consult a Doctor Sign up for Selfcare
Advertisement
Health Topics A - Z
A B C D E F G H I J K L M N O P Q R S T U V W X Y Z