Molluscum contagiosum (MC) or water warts is a mild skin infection caused by the MC virus, which produces pinkish or flesh-colored, painless, raised bumps on the skin

What is Molluscum Contagiosum?

In the year 2010, almost 1.8% of the world population or 120 million were affected by a harmless skin infection called molluscum contagiosum (MC) or water warts. The condition is caused by the molluscum contagiosum virus (MCV) which belongs to the family of poxviruses. The infection is characterized by pinkish or flesh-colored raised bumps on the skin and generally it disappears without medical treatment within a year.

The bumps can occur anywhere in the body, but are most common on the face, neck, arms, legs, armpits, groin as well as the trunk of the body. The number of bumps often depends on the immune status of the patient. Individuals with a weak immune system often have larger number of bumps and vice versa. The virus infection spreads either by direct skin-to-skin contact or via fomites, such as contaminated towels, clothes or other objects. The infection causes no scarring. As this is a harmless lesion, a child can continue to attend school or daycare.

The incidence rate is around 12-14 episodes per 1000 children per year. There is a higher incidence in warm, tropical climates and it is more commonly associated with poor hygiene. Although MC infections can occur at any age, they are most common in young children between 1-10 years of age, which accounts for roughly 80% of the cases.

What are the Types of Molluscum Contagiosum?

Molluscum contagiosum is of three types, based upon the three stages through which the infection passes. These include the following:

What are the Causes of Molluscum Contagiosum?

Molluscum contagiosum is caused by MCV infection, which can spread in the following ways: 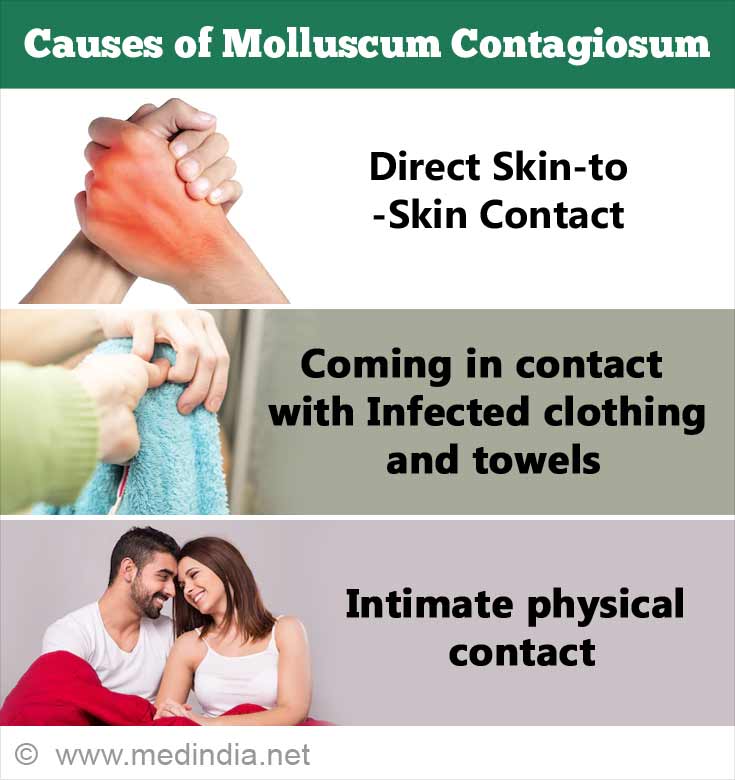 What are the Symptoms and Signs of Molluscum Contagiosum?

The primary symptom of MC is the appearance of bumps on the skin, often exhibiting the following signs:

How do you Diagnose Molluscum Contagiosum? 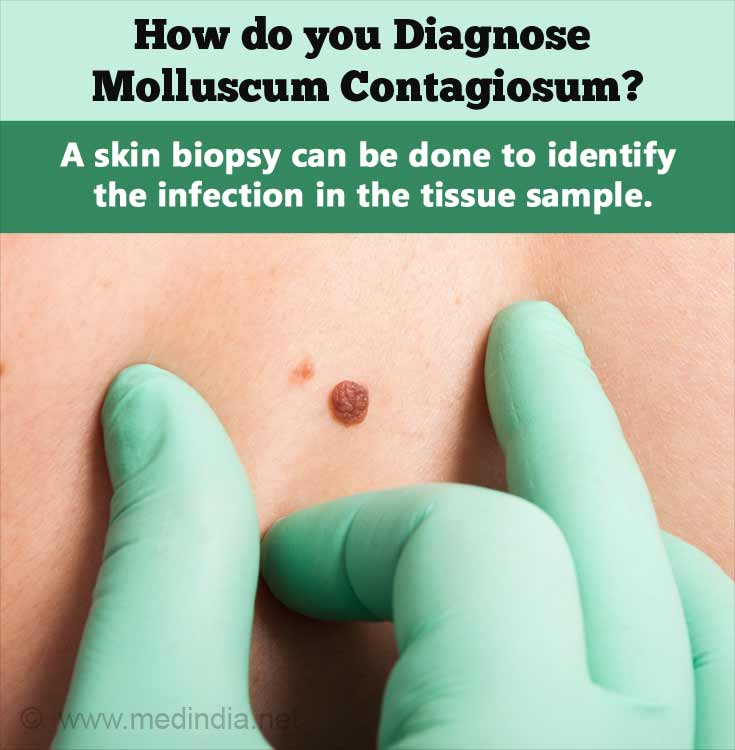 How do you Treat Molluscum Contagiosum?

Treatment for MCV infections are generally not recommended, especially for children as the symptoms generally resolve by itself (usually within a year) and the infection does not interfere with daily activities. However, there are several treatment options that are available for adults in whom the disagreeable appearance may interfere with the nature of their occupations e.g. celebrities like actors and other public figures. These treatment options are briefly discussed below:

What are the Risk Factors for Molluscum Contagiosum?

There are several risk factors for MC, including the following:

What is the Prognosis of Molluscum Contagiosum?

The prognosis or outlook of MC after treatment is generally excellent. Moreover, the infection generally resolves by itself within a year, even without treatment. However, sometimes complications may arise such as secondary bacterial infections, including that of the eyes, causing conjunctivitis or keratitis. Immunocompromised patients are especially prone to developing secondary infections, resulting in poor prognosis.

Viral Infections
Warts caused by the human papilloma-viruses, the lesions are most common on the hands, feet, and face. Common in children, the elderly, patients with immunologic deficiencies or atopic dermatitis.

Hair Removal may Encourage the Spread of Skin Virus
French doctors have suggested that the trend for shaving, clipping or waxing pubic hair may encourage the spread of a skin virus.

Genetic Cause of Previously Undefined Primary Immune Deficiency Disease Revealed
A genetic mutation that accounts for a perplexing condition found in people with an inherited immunodeficiency has been identified by researchers at the National Institutes of Health.