Lipedema is a fat disorder in women with abnormal and irregular fat deposits in tissues just underneath the skin. Treatment includes decongestive therapy and liposuction

Lipedema is a disorder characterized by abnormal and irregular deposits of fat in tissues underneath the skin. There is abnormal symmetric enlargement of the legs, thighs and buttocks. Lipedemic fat in the later stages may also accumulate in the chest, abdomen and upper extremities. People with lipedema may have size disparities of up to ten clothing sizes between their top and bottom.

Lipedema is also known as painful fat syndrome and about eleven percent of women are affected with this condition. Lipedema can be mistaken for regular obesity or bilateral lower extremity lymphedema. Patients with lipedema who undergo bariatric surgery for weight loss may continue to have extensive fat deposits which are refractory to weight loss attempts.

Initially, lipedema may be a cosmetic concern but later on it may lead to other health related problems such as joint pains and mobility issues. Lipedema fat is relatively unresponsive to diet and exercise measures.

What are the Causes of Lipedema?

Though the exact causes are not known, lipedema is believed to occur due to variations in the female hormonal levels during puberty, pregnancy, perimenopause or menopause. This condition is mostly triggered at puberty or during pregnancy but it can also begin or worsen following gynecological surgery.

Genetics also plays an important role as lipedema is known to run in families. Many women suffering from lipedema have other female family members with the same condition.

What are the Stages of Lipedema?

There are three stages of Lipedema:

Stage I: This is the beginning stage where the fat is still smooth and soft though it is enlarged. The swelling, heaviness and pain in the legs can be managed with rest and elevation of limbs. This stage responds well to treatment.

Stage II: During this stage, the fat begins to form firm nodules [lipomas] which cause indentations in the skin similar to cellulite. The swelling and tenderness does not reduce much with rest and elevation of feet. As lipedema progresses, inflammatory changes occur in the fatty tissue.

Stage III: In this stage large masses or lobules of fat and skin overhang and deform the affected areas. There is more hardening of the fat and connective tissue [fibrosclerosis] and skin may have a puckered (peau dorange) appearance. Pain may become debilitating and limit mobility as well. The swelling is consistently present and less responsive to treatment.

Stage II and III lipedema may obstruct lymph flow due to the pressure of the fat deposits on the lymph vessels leading to lipolymphedema.

What are the Symptoms & Signs of Lipedema? 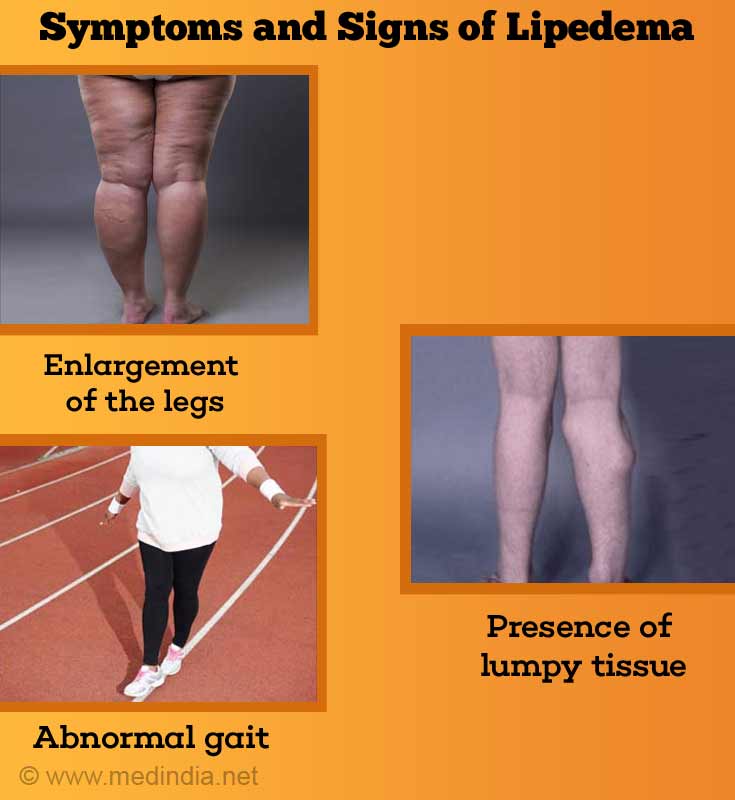 What are the Consequences of Lipedema?

If lipedema is not controlled in the initial stages, fat eventually accumulates in the upper arms and torso along with the lower limbs. As lipedema progresses the pain and swelling increases. This leads to reduced mobility and excess stress on knee joints causing joint pain and an abnormal gait. Patients with lipedema may eventually get fluid retention in their legs (lymphedema) as the blood circulation and lymphatic functions are compromised due to the pressure of the fat cells. Some patients may also suffer from severe depression and anxiety.

How do you Diagnose Lipedema?

The following criteria by The National Institute of Health [NIH] are guidelines for diagnosing Lipedema.

Blood tests: Tests for thyroid, inflammatory markers [CRP, ESR, plasma viscosity (PV)], and vitamin D may be recommended to treat any condition that can increase lipedema.

2-D Ultrasound: This is a quick and easy noninvasive test. Just placing an ultrasound probe on top of the skin will show the fat deposits present below the skin.

Lymphangiogram or Lymphoscintigraphy: A radioactive solution is injected in the affected area to map the path of lymphatic fluids through the targeted regions.

How can you Treat Lipedema?

The treatment of Lipedema is divided into 1) Conservative treatment and 2) Surgical treatment.

Conservative treatment: This is the first step in management of Lipedema and includes:

Drugs may be prescribed to treat pain, anxiety and depression often seen with lipedema patients.

Leg and Foot Swelling During Travel - The Cause and Solution
Are you suffering from swollen legs after a long travel? Read on to know the reasons and ways to reduce your swelling.

CELLULITE - 'Orange Peel' Syndrome
Cellulite is a common skin condition that affects thighs, abdomen and buttocks in women and some men. It is also known as orange peel syndrome, or cottage cheese skin.

Ankle Edema
Ankle edema also known as peripheral edema is a swelling over either one or both ankles. Examples of generalized causes include heart and kidney disease. Treatment depends on the underlying condition.
Sign up for Wellness Consult a Doctor Sign up for Selfcare
Advertisement
Health Topics A - Z
A B C D E F G H I J K L M N O P Q R S T U V W X Y Z