LADA known as type 1.5 diabetes is a form of type 1 autoimmune diabetes that can be mistaken for type 2 diabetes because it develops in older adults

What is Latent Autoimmune Diabetes?

Latent Autoimmune Diabetes of Adulthood (sometimes referred to as type 1.5 diabetes) is a form of autoimmune type 1 diabetes in which bodys immune system attacks and destroys the insulin producing cells in the islets of the pancreas.

The definition provided by Prof. David Leslie, Principle Investigator of Action LADA, in Europe is as follows -

Normally autoimmune type 1 diabetes is diagnosed in childhood or young adults and rather quickly, sometimes within a matter of days. However, LADA develops more gradually, often over a period of months to years and therefore patients first present when they are in their thirties. Physicians often rule out Type 1 diabetes because of the age factor and misdiagnose it as type 2 adult onset diabetes.

Many scientists believe LADA, is a subtype of type 1 diabetes. Others believe diabetes develops as a continuum, with LADA falling between type 1 and type 2 diabetes. For this reason LADA is also known as type 1.5 diabetes.

Statistics indicate that between 6-50% of all persons diagnosed with type 2 diabetes might actually have LADA. This figure accounts for an estimated 510% of the total diabetes population in the U.S. or, a whopping 3.5 million persons with LADA. Persons with LADA typically have a normal BMI or may be underweight due to weight loss prior to diagnosis. Some people with LADA, however, may be overweight to mildly obese.

Interestingly, some people having LADA do in fact have a family history of type 2 diabetes.

How LADA was Discovered - History

Like many scientific discoveries, doctors stumbled upon the LADA phenomenon quite accidentally back in the 1970s. They were testing methods to detect proteins called auto­antibodies in the blood of people with type 1 diabetes. The presence of these proteins suggested attack by one's own immune system. The new test was successful and for the first time confirmed that type 1 is an autoimmune disease where the insulin producing cells of the pancreatic islets are destroyed by the bodys own immune system.

As part of their study, the scientists also looked for similar autoantibodies in the general population and in patients with type 2 diabetes (which is not an autoimmune disease).

These autoantibodies were virtually absent in the general population, but they were present, to the scientists' surprise, in about 10 percent of persons diagnosed with type 2.

This suggested that there was a subcategory of patients who could now be diagnosed as having LADA instead, despite there being no obvious difference in their symptoms from those of people with type 2 diabetes.

LADA however, was not officially recognized until 1993, when it was used to describe slow-onset type 1 autoimmune diabetes occurring in adults. This followed the discovery that GAD autoantibodies were a feature of type 1 diabetes and not type 2 diabetes.

Clinically diabetes mellitus can be broadly subdivided into the following types

What are the Symptoms & Signs of Latent Autoimmune Diabetes ?

The initial symptoms of LADA include:

As LADA evolves, a persons ability to produce insulin will gradually decrease resulting in symptoms such as:

It is important to catch the symptoms as early as possible because a delay in diagnosis increases the risk of developing diabetes complications.

Having burning and painful sensation of extremities can be a sign of neuropathy (nerve disease), and if this symptom occurs regularly and in association with other symptoms, it is advisable to seek immediate medical attention. 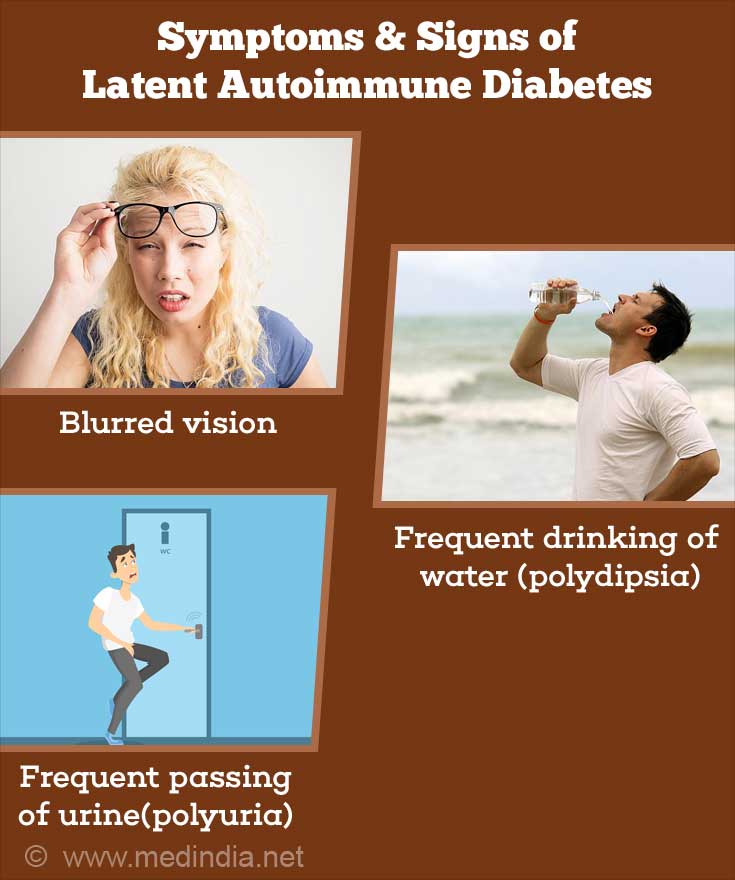 What are the Consequences / Complications of Latent Autoimmune Diabetes?

Diabetic ketoacidosis - Particularly once the pancreas has lost much of its ability to form insulin.

People with LADA should know about the signs and symptoms of ketoacidosis and to self-test for ketones if needed.

Long term complications of LADA will be similar to the those in persons with type 1 and type 2 diabetes.

The various long term complications of LADA include the following

How do you Diagnose Latent Autoimmune Diabetes? 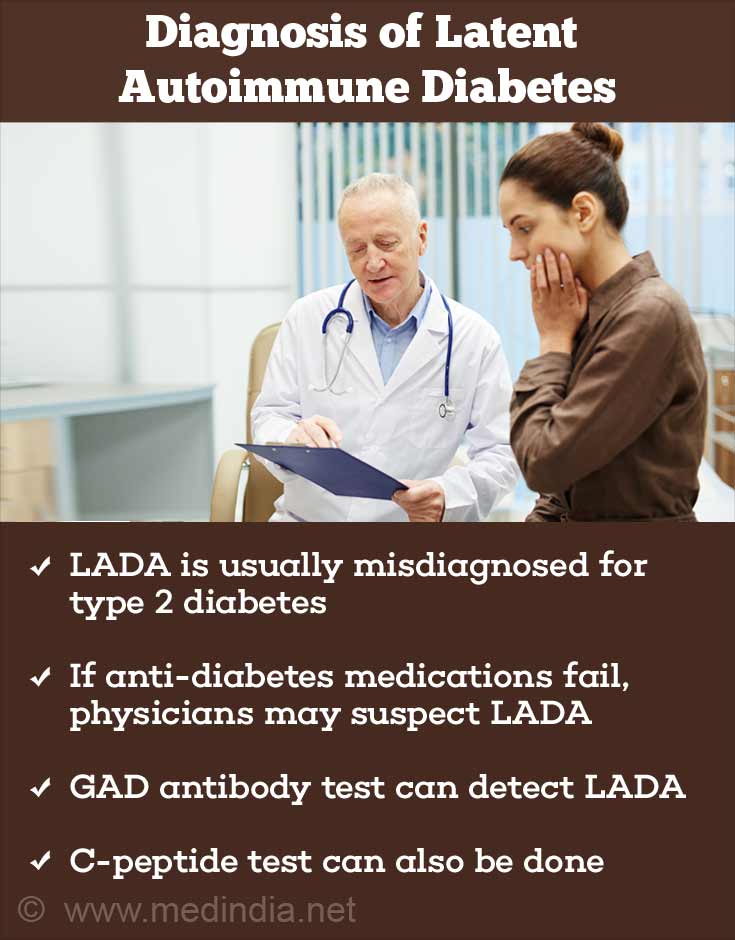 Clinical Features to Suggest LADA Rather Than Type 2 Diabetes

How can you Treat Latent Autoimmune Diabetes?

1. Management of type 1 diabetes/LADA is administration of exogenous insulin to

Although LADA may seem to initially respond to similar treatment (lifestyle and medications) as type 2 diabetes, people with LADA will eventually become insulin-dependent as the conservative measures or oral agents fail to reduce or prevent the progression of the disease.

In some cases, insulin therapy may be postponed. However, research evidence suggests that commencing insulin treatment soon after a diagnosis of LADA will help to better preserve the pancreas function of insulin production.

Regular blood glucose testing is advised for people with LADA similar to that recommended for people with type 1 diabetes. Therefore it is advisable to test blood sugar levels before each meal and before going to bed. 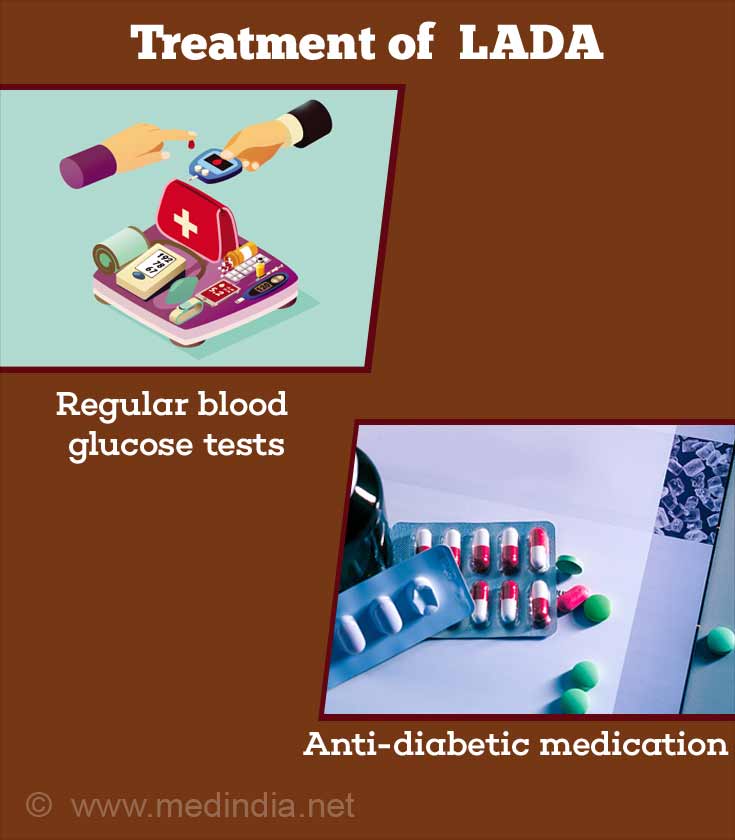 How can you Prevent Latent Autoimmune Diabetes?

There is no known way of preventing LADA type 1 diabetes though some scientists believe it could be halted at a very early stage if a diagnosis is made before the immune system destroys the insulin producing cells of the pancreas.

Nine Wonder Foods to Beat Diabetes
Certain natural foods have unique ingredients that can enhance the health of people living with diabetes. Learn about them through this slideshow.

Type 1 Diabetes
An overview of type 1 diabetes, its contributing factors, management and adopting a healthy lifestyle to cope with it.

Top 10 Warning Signs of Diabetes You Shouldn't Ignore
Warning signs of diabetes such as increased thirst, urinary frequency, prolonged infections, and delayed wound healing among others should not be ignored.