About ▼ Careers Internship MedBlogs Contact us
English (US) ▼
Hib Vaccine

What is Hib Vaccine?

The Hib vaccine protects against severe bacterial infections like meningitis, pneumonia, and epiglottitis caused by the bacterium H. influenzae type b. The Hib bacteria spread through sneezing, coughing, and nasal secretions from an infected person to another person.

The Hib disease is caused by a gram-negative bacterium named Haemophilus influenzae that commonly infects the upper respiratory tracts of children. The germs spread among children through the transfer of nasal secretions during sneezing and coughing. Although children under 5 years are most susceptible to Hib infections, immune-compromised adults can also get infected.

The Hib disease can become invasive when the germs enter the lungs or the bloodstream. Only a minority of those exposed or who are carriers of the organism suffer from the invasive disease. The H influenzae strains that have a polysaccharide (sugar) capsule or coat cause a more serious disease. The H influenzae, type b (Hib) (one of the 6 capsular types) is responsible for more than 90% of the invasive or systemic infections.

Infections that can be caused by the Hib bacterium are: 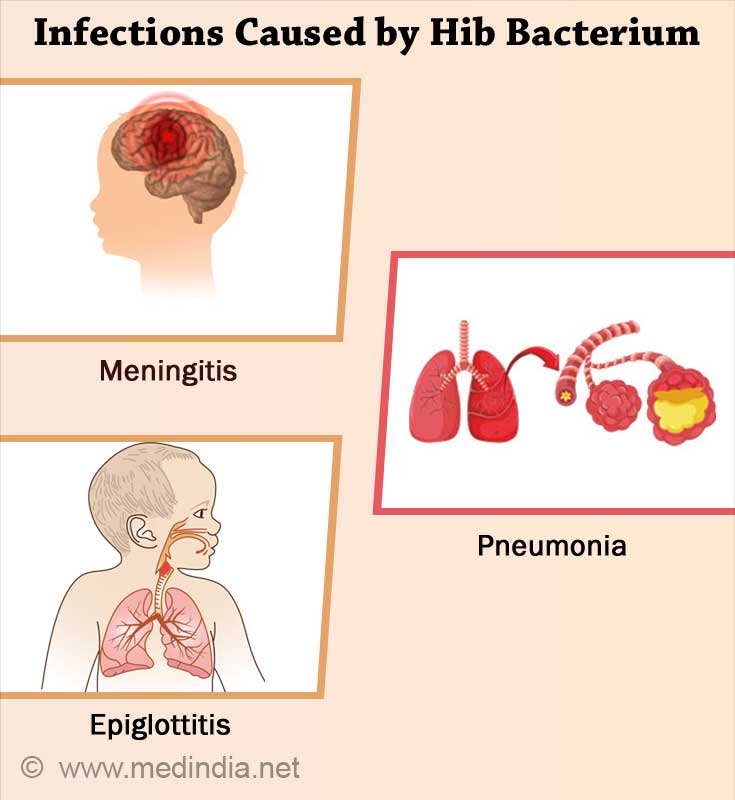 Hib disease is a significant public health concern in many parts of the world; the H. influenzae type b bacterium can cause a potent form of the disease in around 3 million people every year. Another rising fear is the increasing resistance of the Hib bacteria to antibiotic agents that have been reported from many parts of the world. This can be prevented if the Hib vaccine is used. Thus far, the Hib vaccine has been a big boon to society by cutting down the number of invasive Hib disease cases by more than 99%.

How does the Hib Vaccine Work?

Hib conjugate vaccines induce the production of protective circulating antibodies against PRP (anti-PRP) which protects the individuals from attack by the H. influenzae type b bacteria. The vaccine also decreases the nasopharyngeal colonization of Hib, thereby reducing the chances of the spread of the infection.

The conjugate vaccine produces a better immune response as it has the advantage of being recognized by both the B cells and the T cells (B lymphocytes and T lymphocytes are white blood cells involved in immunity). The polysaccharide vaccine (that was used earlier and did not have the carrier protein) was only recognized by the B cells (this kind of interaction is called t-independent or TI), due to which the immunity may not have lasted for a long time.

Pentavalent vaccine (PV) was found to double the deaths of children soon after vaccination when compared to the DPT (Diphtheria-Pertussis-Tetanus) vaccine, reveals a new study. Pentavalent vaccine (PV), a combination of DPT vaccine and two other vaccines against Haemophilus influenza type B (Hib) and Hepatitis B.

What are the Types of Hib Vaccines?

The conjugate vaccines differ from each other depending which protein carrier is used, the size of the polysaccharide, the method of chemical conjugation, and also the use of a spacer or a linking moiety between the PRP and protein carrier.

The Hib vaccine can also be given as part of a combination vaccine, where two or more types of vaccines are combined and administered as a single shot to protect against more than one disease. Hib combination vaccines contain diphtheria, tetanus, and pertussis (DPT-aP) vaccine, sometimes along with hepatitis B and/or the inactivated poliovirus vaccine, IPV.

Commercially, there are three types of monovalent vaccines and one combination vaccine licensed for use by the Food and Drug Administration (FDA).

Who should get the Hib Vaccine? 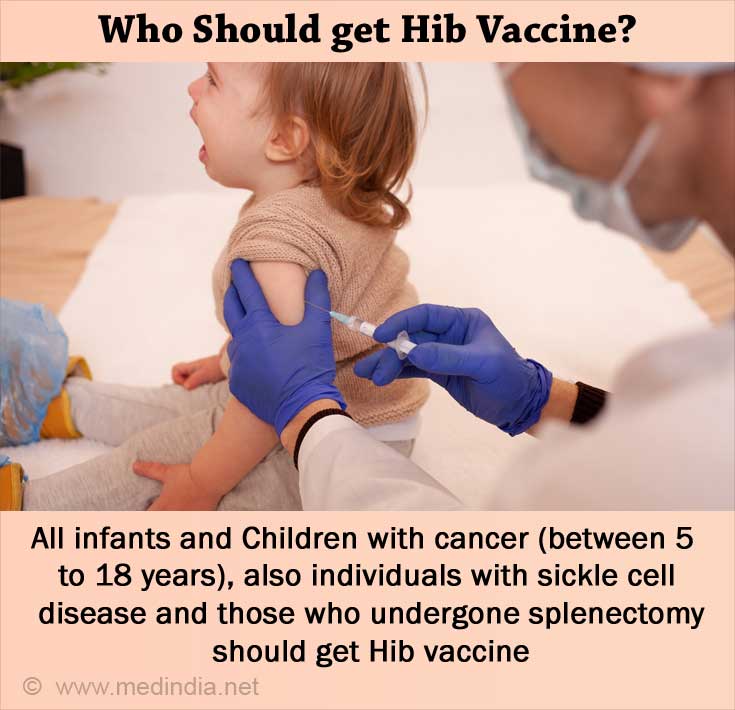 What is the Dosage Schedule for the Hib Vaccine?

The first primary dose can be given as early as 6 weeks. Any of the monovalent vaccines can also be used for older children and adults that need Hib vaccination.

The recommended ages for the doses are:

Children between 6 weeks and 2 years of age who have suffered from a Hib infection should also be administered the vaccine after recovery.

How is Hib Vaccine Given?

The Hib vaccine is given as an injection into the muscle.

What are the Contraindications for Hib vaccination?

Hib vaccine should not be given to the following individuals:

Persons who have a moderate or severe acute illness, who should receive the vaccine only after recovery from the illness.

What are the Side Effects of the Hib Vaccine?

Usually, there are no side effects associated with vaccination. Minor side effects include warmth, soreness, and redness at the injection site and mild fever. Serious problems are mainly allergic reactions to vaccine components.

If there are signs of a severe allergic reaction (hives, swelling of the face and throat), difficulty breathing, fast heartbeat, dizziness, and weakness), very high fever, or unusual behavior, please consult the doctor immediately. 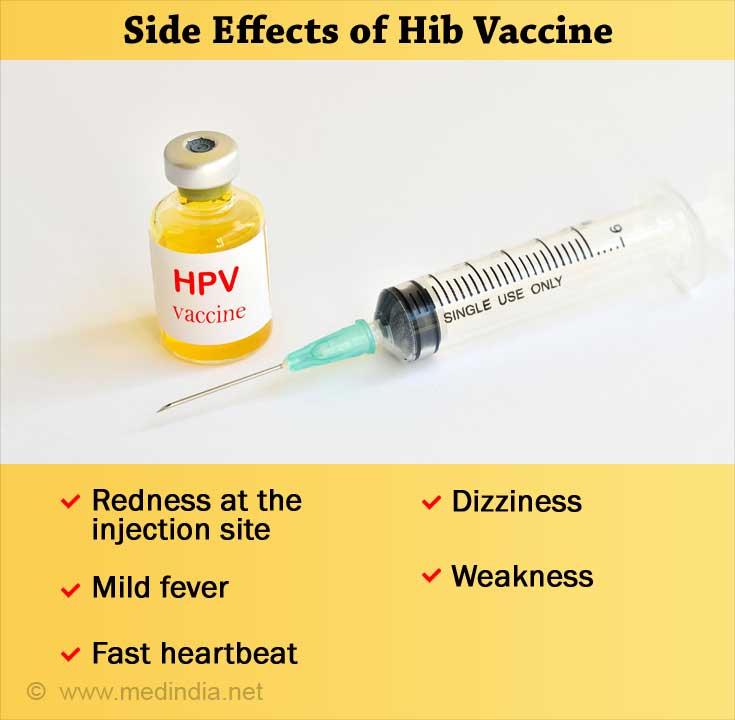 add fiber when using vitimins. for the belly to be filled feeling. even something like green grasses, to fill and while using vitimins. milk from grasses into chemicals that digest them, and constant chewing too. the female breasts' milk is like a fattty sugar. as in men, a fatty muscles, but milk is like a liquid fatty substance. cows build up a guile like substance of fatty sugars. we now have an vitimin water. eat something like fat that is like mothers' milk? from fat cells of their breast? dann van cent.vall.cal.

Meningitis Meninges are the three layers of membrane that cover the brain and infection of the cerebrospinal fluid between them causes meningitis the disease of the meninges.

Splenectomy - Animation Splenectomy is the surgical operation to remove spleen and can be done either by open or laparoscopic methods.

Quiz on Flu Influenza (or rather, the flu) is a cold weather infectious condition that affects the young and old alike. Though most reported cases are mild, the flu can sometimes cause severe and life-threatening complications in both children and adults, ...

Vaccines For Pneumonia, Meningitis Reduce Healthcare Cost Burden The economic impact of Gavi, the global vaccine alliance is estimated to prevent 20 million deaths and save $350 billion in health-care costs by 2020.

Vaccination for Children Vaccines are biological products that impart immunity to the recipient. Vaccines may be live attenuated, killed or toxoids.