Health disparities are essentially stark differences in health outcomes among different groups of people. This was first observed in Italy in the 1700s when unusually high cases of breast cancer were observed in Catholic nuns. Later, scrotal cancer was largely seen in chimney sweep workers in England. Such cases appeared to indicate that there was more to health outcomes than just the disease alone.

According to the World Health Organization, there are health inequities (inequalities in health results) spread across the globe affecting children, infants, adolescents, ethnic groups, and maternal health. For example, each day, in poor and underprivileged households, children under the age of five die due to malaria, measles, pneumonia, or other diseases. The WHO notes 21,000 such children die everyday.

Health disparities are differences in the status of health, which systematically and negatively affect particular groups with a social disadvantage, e.g. women, disabled individuals, minorities, or those with different sexual orientation.

Factors, such as race, gender, education, environment, ethnicity, socioeconomic conditions such as low income, poverty, and individual behavioral factors play a significant role in determining the outcome of a disease and overall health equity. Historical events, social and political inequality, all have an impact on health outcomes. 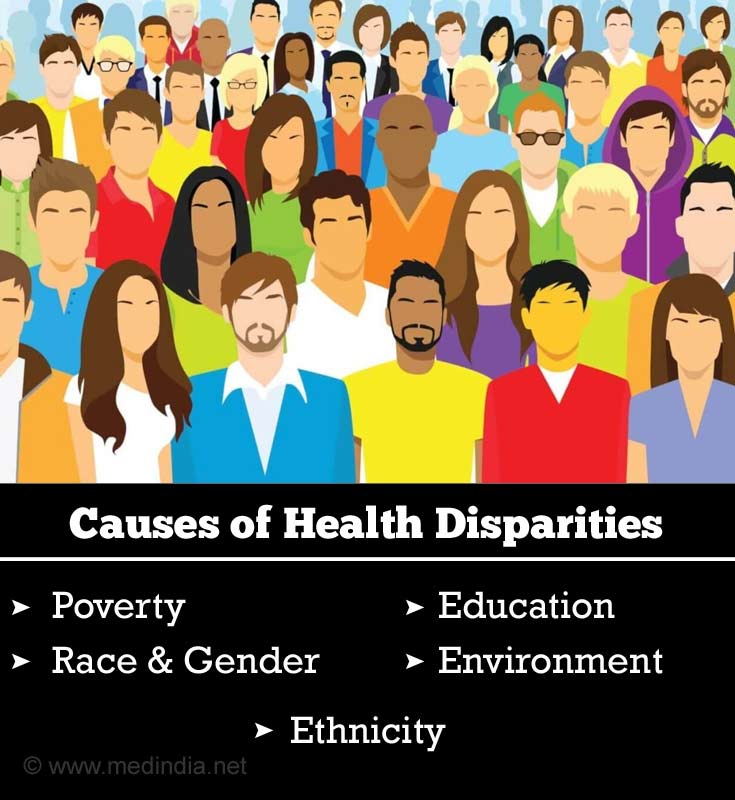 What are healthcare disparities?

What are minority health disparities?

In the United States, minority health disparities are differences in health outcomes observed in minority Americans and the black population. Minority Americans may be Native Americans, Asian Americans, Native Hawaiian, Pacific Islander, or Alaska Native. The National Institute on Minority Health and Health Disparities (NIMHD) supports research into the factors that cause health disparities in the minority population. Through the data obtained from the research, solutions, partnerships, collaborations, and policies may be formulated to deal with the disparities.

Who is the target population for health disparities?

In India, health disparities have been largely studied in women and their reproductive health, and in children.

Disparity in Prostate Cancer Diagnosis and Mortality Between Whites and African Americans Linked With Potential Biological Factor
A new study reports on the identification of a potential biological factor that could be responsible for the difference of prostate cancer incidence.

Find a Hospital Loram (2 mg) (Lorazepam) Accident and Trauma Care Blood Pressure Calculator Sinopril (2mg) (Lacidipine) Calculate Ideal Weight for Infants Noscaphene (Noscapine) Hearing Loss Calculator Sanatogen The Essence of Yoga
This site uses cookies to deliver our services.By using our site, you acknowledge that you have read and understand our Cookie Policy, Privacy Policy, and our Terms of Use  Ok, Got it. Close