Gigantism is a rare disorder caused by excess growth hormone formation by the pituitary gland leading to increased growth and very tall stature. Surgery is the preferred treatment

Gigantism is a rare endocrine disorder characterized by the production of excessive growth hormone (GH) by the pituitary gland during childhood. It leads to abnormally increasedF growth and extremely tall stature although body girth may also be increased. A similar condition in adults where GH excess occurs after the person stops growing is termed acromegaly and the clinical features are different from gigantism.

The function of growth hormone is stimulation of growth of bones, muscles, and several internal organs. Therefore, excess GH production leads to abnormal increase in the growth of these structures.

In gigantism, the growth hormone excess occurs while the child is still growing and the growth phase is not yet complete causing the child to reach an extremely tall stature. Also, there is increased growth of muscle and organs making the child unusually tall and large for his/her age.

What are the Causes of Gigantism?

Gigantism is an extremely rare condition. The various causes include 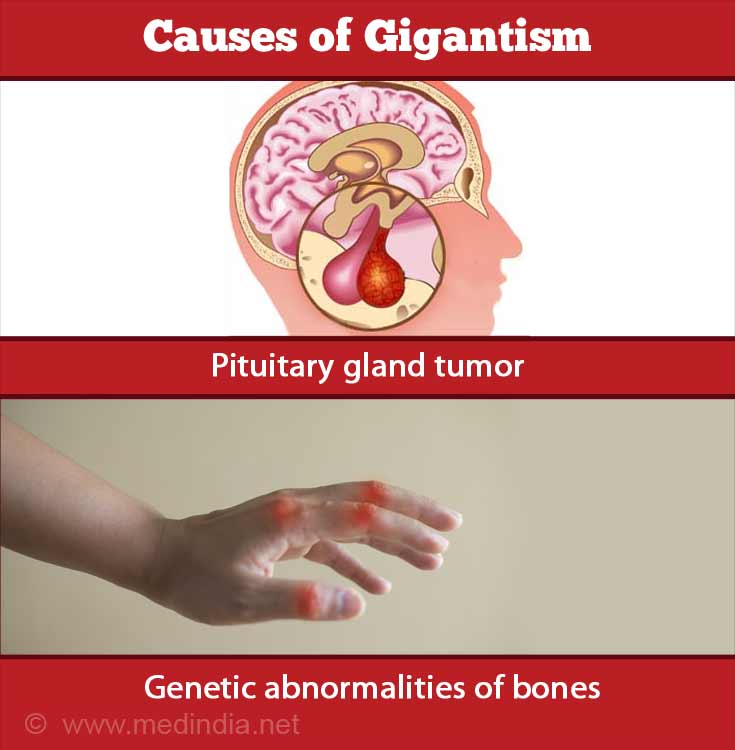 What are the Symptoms and Signs of Gigantism? 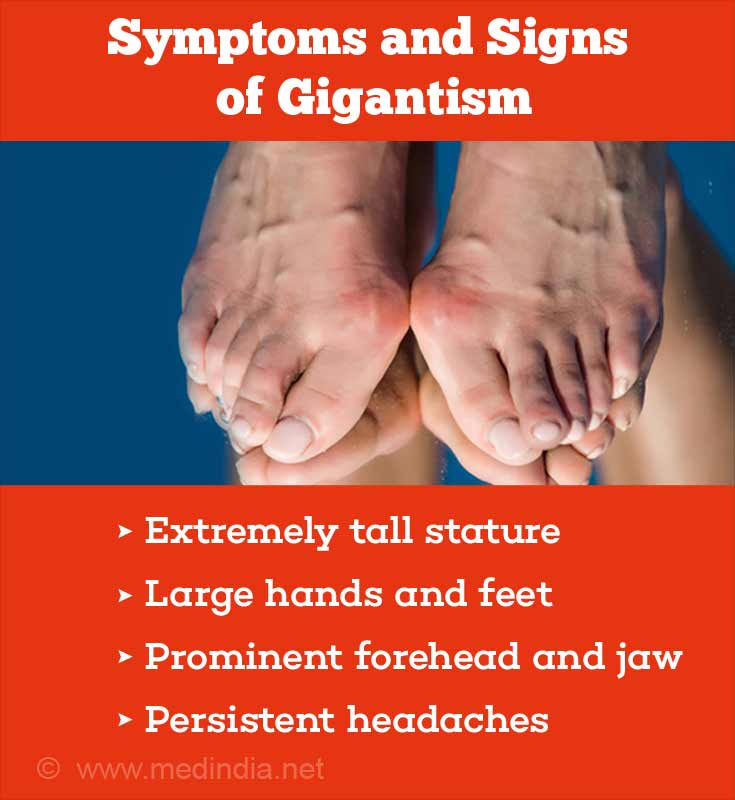 Most cases of gigantism are caused by a tumor of the pituitary gland. The symptoms therefore may depend on the size of the pituitary tumor. As the tumor enlarges, it may press on adjacent structures and nerves in the brain. Symptoms due to compression of brain structures include

How do you Diagnose Gigantism?

Early diagnosis is important so that treatment can begin early to slow down or stop the changes caused by excess growth hormone. However, the condition may not be easy for parents to identify as the changes may be initially mistaken for normal childhood growth spurts.

When the parents consult a doctor for persistent headaches, sleep disturbances or menstrual abnormalities in girls, the doctor will obtain a detailed report and make a thorough physical examination. Based on suspicion, further tests may be requested to confirm the diagnosis of gigantism

Blood test to measure levels of growth hormones and insulin-like growth factor 1 (IGF-1), which is a hormone produced by the liver both of which may be elevated. Other hormones that are measured include cortisol, thyroid hormone, prolactin, testosterone (in boys) and estradiol (in girls). 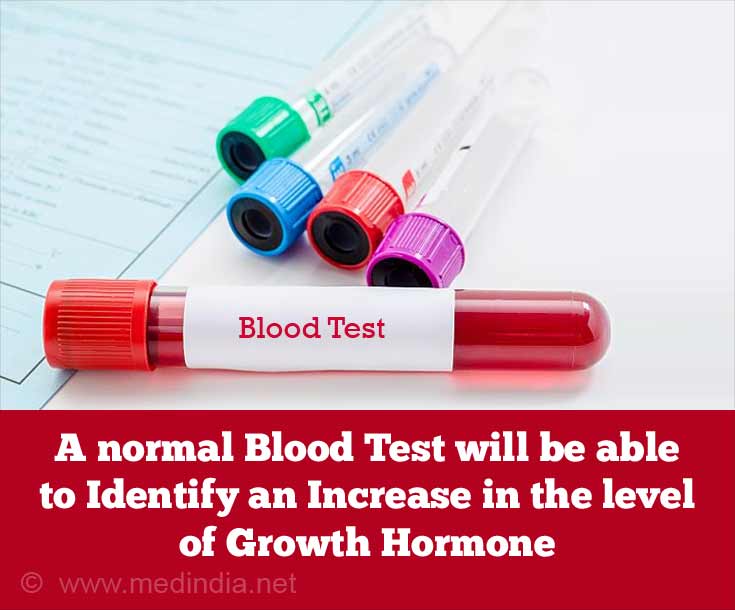 Thechildis given a drink containing glucose, a type of sugar. Blood samples will be taken before consuming the drink and every half hour for two hours after drinking the beverage.

Normally, growth hormone levels will drop after eating or drinking glucose. If the levels of GH remain the same, it indicates that the body is producing too much growth hormone.

If the blood tests indicate gigantism, an MRI scan of the brain may be advised. The scan will help to pinpoint the exact location of the tumor and its size.

How do you Treat Gigantism?

The aim of treatment is to decrease or stop the production of growth hormone in the pituitary gland. The various treatment options available are surgery, medications and radiotherapy.

Surgery is the preferred method of treatment when practically possible when the cause of gigantism is a pituitary adenoma. In tumors with well-defined margins, surgery is the treatment of choice to completely remove the tumor and is mostly curative. The surgeon may approach the tumor via the nose; microscopes or small cameras are used to visualize the tumor and remove it.

If the tumor does not have well defined margins or there is risk of injury to an important blood vessel or nerve, it may not be possible to completely remove the tumor by surgery. In such cases, drugs may be used to prevent or reduce growth hormone release.

If standard surgery is not possible, then the surgeon may recommend gamma knife surgery. The gamma knife consists of about 200 highly focused radiation beams. They are able to deliver a powerful dose of radiation at the point where they meet and hit the tumor. This dose is sufficient to destroy the tumor tissue. It is performed under general anesthesia.

This treatment has been linked to development of obesity, behavioral problems and learning difficulties in children and is considered only if other options fail.

Latest Publications and Research on Gigantism

Hyperprolactinemia
Hyperprolactinemia is abnormally high levels of hormone Prolactin in the blood. This is normal in pregnancy, but, elevated levels when not pregnant or breastfeeding can affect normal menstrual function and fertility.

Scientists Recommend Tumor Removal as First-Line Treatment for Acromegaly
The Endocrine Society has issued a Clinical Practice Guideline (CPG) for the diagnosis and treatment of acromegaly, a rare condition caused by excess growth hormone in the blood.

Acromegaly
Acromegaly (Greek-enlargements of the extremities) is a hormonal disorder resulting from excessive production of the growth hormone by the pituitary gland after puberty, often referred as gigantism.