Serotonin (5 hydroxytryptamine or 5HT): It is a monoamine neurotransmitter. It is believed to play an important role in the regulation of mood, sleep, emesis (vomiting), sexuality and appetite.

Dopamine: A chemical that transmits messages in the brain and plays a role in movement.


Cognitive: Pertaining to the mental process of thought, including perception, reasoning, intuition and memory.

Neurotransmitter: Chemicals that act as messengers between cells in the brain and nervous system; they transmit impulses across the gap from a neuron to another neuron, a muscle, or a gland.
Published on Sep 07, 2017
Last Updated on Jul 18, 2019

Personality Traits Associated With Area and Thickness of the Brain

The thickness, area and folding of the brain cortex are associated with distinct personality traits which can be used to identify risk of mental illness.

Symptoms And Signs of Agoraphobia

Agoraphobia, like all other anxiety disorders is characterised by the absence of any brain disease or psychiatric disorder.

Intense fear, persistent worry, bad dreams, feelings that you may be going crazy ï¿½ sounds familiar? Take this quiz and find out more on symptoms and treatment of anxiety ...

Anxiety is a state of mind where a person experiences fear, uneasiness, tension, irritability or apprehension in response to an unfamiliar stressful situation or object.

Schizoaffective disorder is a serious mental disorder in which the individual reflects symptoms that occur both in schizophrenia and mood disorder.

Somatic symptom disorder is said to occur when a person's focus, feelings and behavior related to physical symptoms is excessive and affects normal functioning. 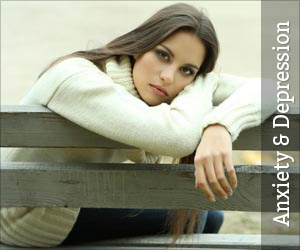 This medication is a selective serotonin reuptake inhibitor (SSRI), prescribed for depression. It works by increasing the ...

This medication is a benzodiazepine, prescribed for anxiety. It is also used for muscle spasms and ...

Duloxetine belongs to a class of drugs known as serotonin-norepinephrine reuptake inhibitors. It is prescribed for ...

This medication is an antidepressant of the selective serotonin reuptake inhibitor (SSRI) class, prescribed for major ...