It is a slow growing cancer of the lymph nodes. It is the most common form of slow growing B-cell non-Hodgkin's lymphoma.

What is Follicular Lymphoma?

What are the Types of Follicular Lymphoma?

Based on the microscopic appearances, follicular lymphomas are graded as grade 12, grade 3A or grade 3B. The grade refers to how fast the lymphoma is likely to grow with higher grades showing faster rates of growth.

What are the Causes of Follicular Lymphoma?

The factors that cause follicular lymphoma are not known. It generally affects persons above 50 years of age, with the average age at diagnosis being 60 years. This type of cancer is more common in men than in women. Follicular lymphomas are not inheritable.

In some cases, radiation or cancer-causing chemicals such as hair dyes, pesticides, herbicides or certain infections, have been found to be associated with follicular lymphoma. A commonly noted mutation in FL involves translocation of DNA between chromosomes 14 and 18, or t (14;18) which turns on the bcl-2 oncogene leading to uncontrolled proliferation of B-cells.

Follicular lymphoma may be associated with the presence of abnormal immune system function and conditions such as HIV, rheumatoid arthritis, lupus, or celiac disease in which the immune system is affected.

What are the Symptoms of Follicular Lymphoma?

Patients may be asymptomatic. However the most common symptoms of FL include the following:

How do you Diagnose Follicular Lymphoma?

Physical examination: Generally, patients with FL have painless enlargement of superficial lymph nodes of small to medium size, which sometimes may not be noticed by the patient. Patients may also have B symptoms described above.

Radiologic: Computed Tomography and PET scan will help in determining which parts of your body are affected and the stage of the lymphoma. Nowadays, a combination of two procedures, namely, PET-CT is performed using a small amount of a radioactive tracer, 18F-fluorodeoxyglucose (FDG), that is injected into the patient and becomes highly concentrated in lymphoma cells. PET-CT is more sensitive and specific than CT, and it also distinguishes viable tumor from scar or fibrosis. PET-CT is advisable as live tumor cells are avid for glucose and they will be able to retain the 18FDG glucose used in PET-CT. Hence, residual tumor cells will be detected by the PET camera and visualized.

Pathologic: Accurate diagnosis of follicular lymphoma can be made by a biopsy that can be performed in various ways:

The removal of tissue or fluid using a thin needle (fine needle biopsy) is not recommended for a reliable lymphoma diagnosis.

Excisional biopsy is essential to avoid misdiagnosis, but if a lymph node is not easily accessible, core biopsy and fine-needle aspiration (FNA) biopsies along with other advanced techniques such as immunohistochemistry (IHC), flow cytometry, polymerase chain reaction (PCR), and fluorescence in situ hybridization (FISH) are done to determine the antigenic characteristics of the cancer cells and molecular changes that may be present.

As mentioned earlier, the lymphoma will be graded according to microscopic appearances with higher grade tumors considered to be faster growing.

How do you Treat Follicular Lymphoma?

The symptoms, the aggressiveness of the tumor, age and general health are the factors that determine the type of treatment to be given. The majority of people with FL have widespread disease when first diagnosed. The slow growing nature of these tumors make them less susceptible to standard forms of cancer treatments and so treatment is given to improve the symptoms such as progressively enlarging lymph nodes, weight loss, fever, night sweats and low blood counts.

Watch and wait: If patients are asymptomatic when they are diagnosed with FL, the treatment might not be given at first. In this case, the doctor usually suggests active monitoring, known as watch and wait.

Radiation therapy: Some patients with clinically early-stage (stage I or II) FL develop symptoms and they can be treated with radiation therapy alone. This uses high-energy beams to slow or stop the growth of cancer cells and is administered to the region of affected lymph nodes (called involved field radiation) or to the affected and nearby lymph nodes (called extended-field radiation).

Chemotherapy: This uses drugs to stop the growth of cancer cells either by killing the cells or by stopping them from dividing. Examples are Chlorambucil (Leukeran®), and Fludarabine. Combination chemotherapy provides treatment using two or more anticancer drugs.

Immunotherapy: The most common immunotherapy used is Rituximab, which is an antibody that selectively targets FL tumor cells. Following reduction in tumor size after Rituximab treatment, some patients with FL may choose to receive further treatments with Rituximab "maintenance therapy."

Stem cell transplantation: It is generally carried out in patients when lymphoma recurs after treatment and is carried out using either their own stem cells (autogeneic) or stem cells from a donor (allogeneic transplant).

Generally, in most patients, the follicular lymphoma relapses multiple times and so they are treated with novel targeted agents. These are small molecules designed to target signaling pathways that are abnormally expressed in the cancer cells. Example: Idelalisib is a novel agent used for the treatment of FL that has relapsed multiple times.

What are the Prognostic Factors for Follicular Lymphomas?

For prognosis of lymphomas, The International Prognostic Index (IPI) was developed which depends on 5 factors: age, stage of lymphoma, whether it is limited to one site or already spread, the persons ability to do normal work and levels of serum lactate dehydrogenase (LDH that goes up with the amount of lymphoma). This index however did not consider the newer treatments available, so a revised IPI based on people with fast-growing lymphomas who have received modern treatment, including Rituximab was released.

This IPI is useful for most lymphomas but FL is slow growing, and so a new Follicular Lymphoma International Prognostic Index (FLIPI) was developed which uses different prognostic factors than the IPI. The good prognostic factors include age 60 years or below, stage I or II disease, blood hemoglobin levels-12g/dL or above, normal serum LDH and involvement of 4 or less lymph nodes.

The overall survival rate of patients with follicular lymphoma is 72-77% at 5 years. Median survival was approximately 8-10 years. Patients who have four or more of the poor prognostic factors have a 10-year survival rate of approximately 36% (compared with 71% for those with one or none of these). All these are estimated survival rates and cannot predict an outcome. Due to recent new treatments, current survival rates have gone higher and recent reports for the period 1986 and 2012 estimates life expectancy of over 20 years.

How do you Prevent Follicular Lymphoma?

There is no known way to prevent follicular lymphoma. However, it is possible to reduce risk for the disease by avoiding some of the known risk factors:

Tositumomab and Iodine 1131 Tositumomab
This medication is a monoclonal antibody, prescribed for non-Hodgkin ...
READ MORE

Rituximab
This medication is a monoclol antibody, prescribed for certain types of cancer such as lymphomas, leukemia, transplant rejection and some autoimmune ...
READ MORE 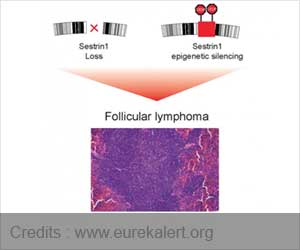 Study Finds Lymphoma Drug Effective Over Long Term
Eight years after being treated with a new drug for non-Hodgkin's lymphoma, 86 percent of patients were still alive and half had not had a relapse of their disease.
READ MORE

Types of Non-Hodgkins Lymphoma (NHL)
Non-Hodgkins lymphomas are broadly classified depending on the type of lymphocyte affected and on the rate of its progress.
READ MORE