What is Esophageal Cancer?

Esophageal cancer is a malignancy which occurs in the hollow tube or the food pipe which connects the throat to the upper end of the stomach.

Structure and Function of the Esophagus

The esophagus or the food pipe is the hollow muscular tube that connects the back of the oral cavity to the upper end of the stomach. It conducts swallowed food and liquid to the stomach to be digested.

It measures 25-30 cms in length and has constrictions that are normally present at various points along its length. At the narrowest portion, it measures about ¾ inch in diameter.

The wall of the esophagus is formed of 4 layers namely

The esophagus has two muscular rings or sphincters. Normally both sphincters are closed. The upper esophageal sphincter (UES) occurs in the upper part of the esophagus and relaxes to allow passage of food which is swallowed. The lower esophageal sphincter (LES) relaxes to allow passage of food into the stomach. When the LES is incompetent it can lead to gastric acid reflux or if it fails to relax, like in a condition called achalasia, the risk of esophageal cancer is increased slightly.

Most often esophageal cancers arise in the lining epithelium of the esophagus and spread into the other layers and invade nearby structures or spread to distant sites (distant metastasis).

What are the Types of Esophageal Cancer?

Adenocarcinoma  Adenocarcinoma arises from a pathological change that occurs in the normal esophageal lining squamous epithelium. This change is termed Barretts esophagus and is found to be associated with chronic symptomatic acid reflux disease. The normal squamous or flat cells lining the esophagus become columnar (resembling the lining cells of the small bowel and colon) as a result.

Adenocarcinoma most often occurs in the lower third portion of the esophagus.

Other rare forms of esophageal cancers include lymphoma, melanoma, and sarcoma.

What are the Causes and Risk factors for Esophageal Cancer?

Esophageal cancer develops when the DNA within the cells undergoes alterations or mutations that cause these cells to grow and multiply out of control forming a tumor mass.

Esophageal cancer develops in chronically irritated esophageal mucosal lining. Many factors contribute to irritation of the esophageal lining. These include

What are the Symptoms and Signs of Esophageal Cancer?

The signs and symptoms of esophageal cancer include

Difficulty in swallowing (dysphagia)  Pain or discomfort while swallowing; sensation of food getting stuck in the throat or chest. It is important not to neglect these symptoms and one has to seek urgent medical attention.

Persistent heartburn or indigestion  A tumor involving the lower part of the esophagus might cause dysfunction of the lower esophageal sphincter and cause acid reflux leading to burning sensation or chest discomfort, especially after eating. Though heartburn or indigestion can be harmless, it is important to consult a doctor and get investigated.

Weight loss  Decreased intake of food due to swallowing difficulties can lead to marked weight loss.

Regurgitation of food  Due to difficulty in swallowing, swallowed food starts to come back up. This begins initially with solid food and with disease progression, soft mashed food as well as liquids begin to be brought up.

Persistent cough and/or hoarseness of voice  possibly due to pressure on the windpipe.

Vomiting blood  This may rarely occur should an ulcerated growth bleed or there is infiltration of the tumor into a blood vessel.

Complications from advanced disease include

How do you Diagnose Esophageal Cancer?

When one seeks medical attention for one or more of the afore mentioned symptoms, the following tests may be conducted to rule out esophageal cancer.

Barium Swallow - This is a radiological procedure to image the esophagus. It may be necessary to fast for a few hours prior to the procedure.

Before the procedure, the patient changes into a hospital gown and faces the x-ray camera. He is then given some barium containing liquid to swallow and as he is swallowing the liquid, x-ray images of the esophagus are captured.

If the results are suggestive of a growth, further investigations may be necessary.

Upper Gastrointestinal Endoscopy (UGI endoscopy) - A hollow flexible tube equipped with an illuminated lens at its distal end is passed via the mouth down the throat into the food pipe.

The patient is instructed to fast overnight and stop certain medications such as anticoagulants for a few days before the procedure to reduce the risk of bleeding.

Just before the procedure the throat is numbed with an anesthetic, lozenge or gargle and the endoscopic tube passed into the esophagus.

The doctor is then able to directly view the interior of the esophagus and identify abnormal areas such as tumor or inflammation. It is also possible to obtain samples of suspicious looking areas (biopsy) and send them for microscopic examination.

Blood and Urine Tests - Routine blood and urine tests will be conducted to determine the general health status of the patient.

Positron Emission Tomography - Computerized tomography (PET-CT) and Magnetic Resonance Imaging (MRI) - Once a diagnosis of esophageal cancer is confirmed, further tests are carried out to stage the disease. Staging of the disease is necessary to decide on the treatment.

The clinical stages of esophageal cancer include

How do you Treat Esophageal Cancer?

Management of esophageal cancer depends on the type of cancer, disease stage, general health condition of the patient and personal choice.

The various forms of treatment available include surgery, radiotherapy and chemotherapy.

Early esophageal cancer is small and remains confined to the superficial layers of the esophagus and has not spread to distant sites. It is typically treated with surgery alone or surgery in combination with chemotherapy and/or radiotherapy.

Chemotherapeutic drugs can be given before the surgery (neoadjuvant) or after (adjuvant) to kill the cancer cells. In many cases, chemotherapy is combined with radiotherapy to improve effectiveness, but incidence of complications is also more.

Complications after surgery include bleeding, infection and leakage from the site where the esophagus and stomach are attached.

After surgery, it may be necessary to deliver food directly to the stomach for some time to allow the esophagus to heal from the surgery.

In advanced tumor that has spread to distant sites and is inoperable, chemotherapy alone or in combination with radiotherapy might be given to shrink the tumor and relieve symptoms of obstruction.

In some cases, a stent might be introduced through an endoscope to keep the esophagus open and help the patient swallow.

How do you Cope with Esophageal Cancer?

Any diagnosis of cancer causes shock and disbelief, sadness and fear. It is important to seek support to come to terms with the situation till one begins to cope and learns to live with the diagnosis. Some of the measures could include

How do you Prevent Esophageal Cancer?

Though we cant change our genetic makeup or an inherited predisposition to cancer, the following measures might help reduce or prevent risk of cancer.

What is the Prognosis of Esophageal Cancer?

Survival rates or prognosis of esophageal cancer depend on the stage of the disease. Broadly we can divide the cancer into 3 stages, namely

According to the American Cancer Society, 5 year survival rates of the three stages are as follows

Though the above statistics include both squamous cell carcinoma and adenocarcinoma, the prognosis is slightly better for adenocarcinoma. 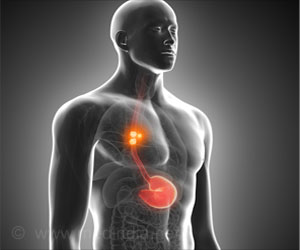 Thick Skin Over Palms and Soles Linked to Esophageal Cancer
Thickened skin over palms and soles is related to an inherited form of esophageal cancer.
READ MORE

Two New Sub-types of Esophageal Cancer Identified
The two new subtypes of esophageal cancer have been identified based on their molecular characteristics.
READ MORE

Role of Oral Cavity Bacterium in Esophageal Cancer
A type of bacterium usually found in the human mouth, Fusobacterium nucleatum (F. nucleatum), has been found to play a major in esophageal cancer.
READ MORE