What is Eosinophilic Esophagitis?

Eosinophilic esophagitis is increasingly being reported over the past few decades, largely due to better diagnostic methods as well as increased awareness amongst doctors. The current prevalence of EoE is estimated to be 50-100 per 100,000 population. Eosinophilic esophagitis is more prevalent in Caucasians and in males, with a male to female ratio of 3:1. However, it has also been reported in American African, Asian, and Hispanic populations.

What are the Causes of Eosinophilic Esophagitis?

Some of the major causes of EoE are briefly highlighted below: 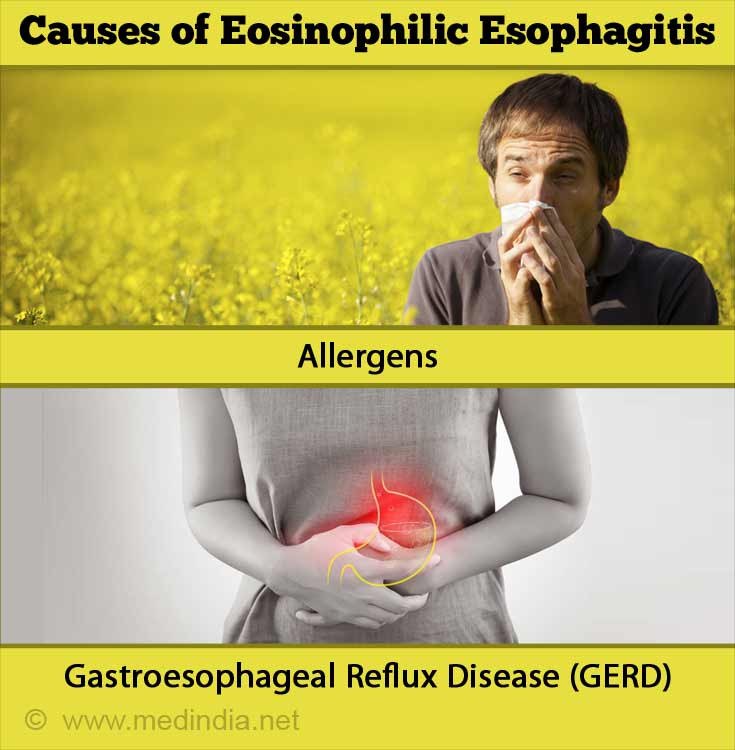 What are the Symptoms & Signs of Eosinophilic Esophagitis?

Some of the major symptoms and signs in children and adults are highlighted below: 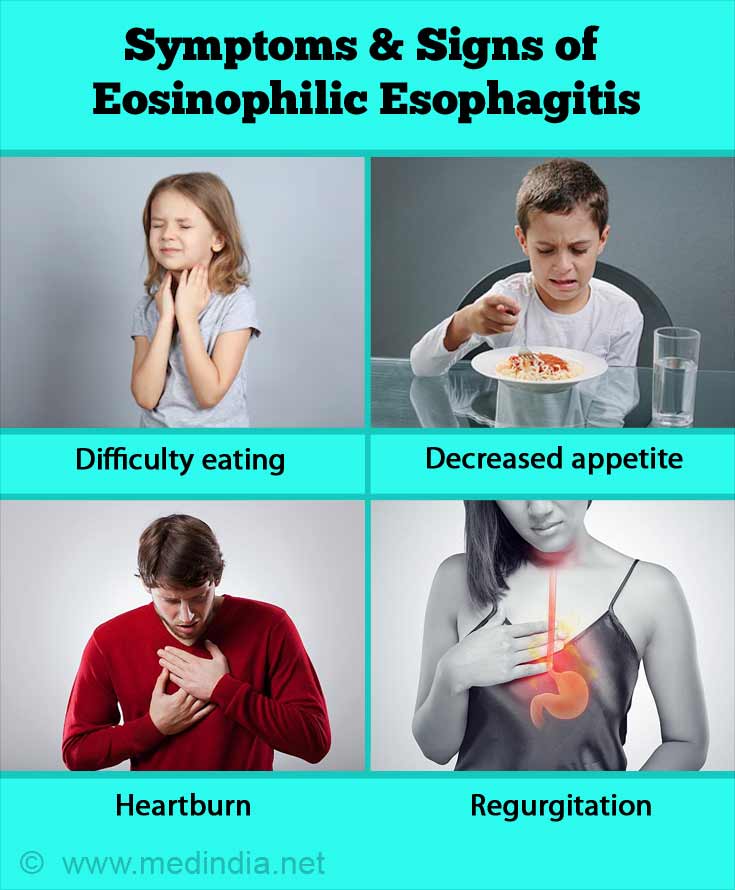 How do you Diagnose Eosinophilic Esophagitis?

There are several tests that are used to diagnose EoE, which are briefly described below: 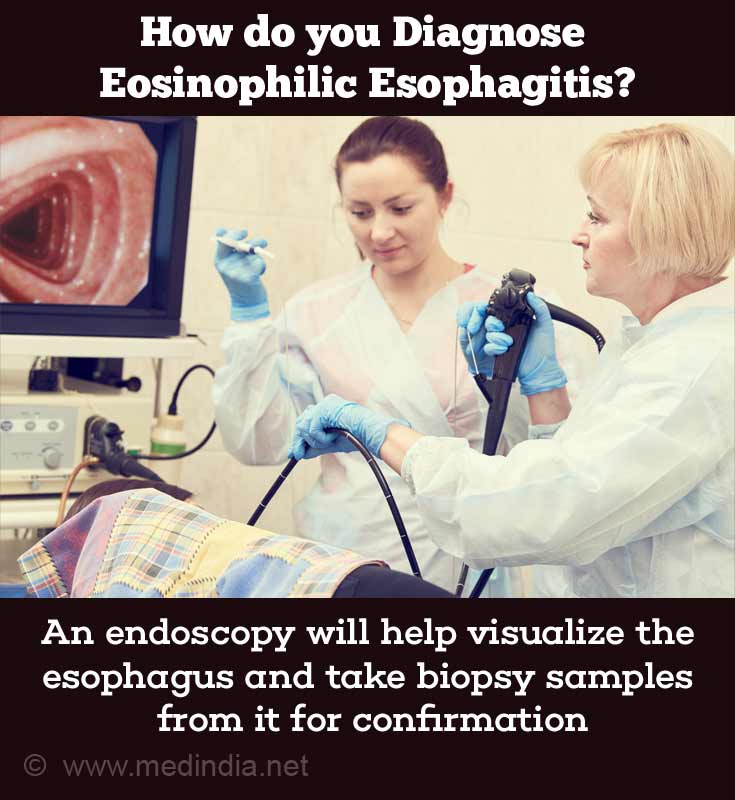 How do you Treat Eosinophilic Esophagitis?

Treatment can involve several approaches such as: 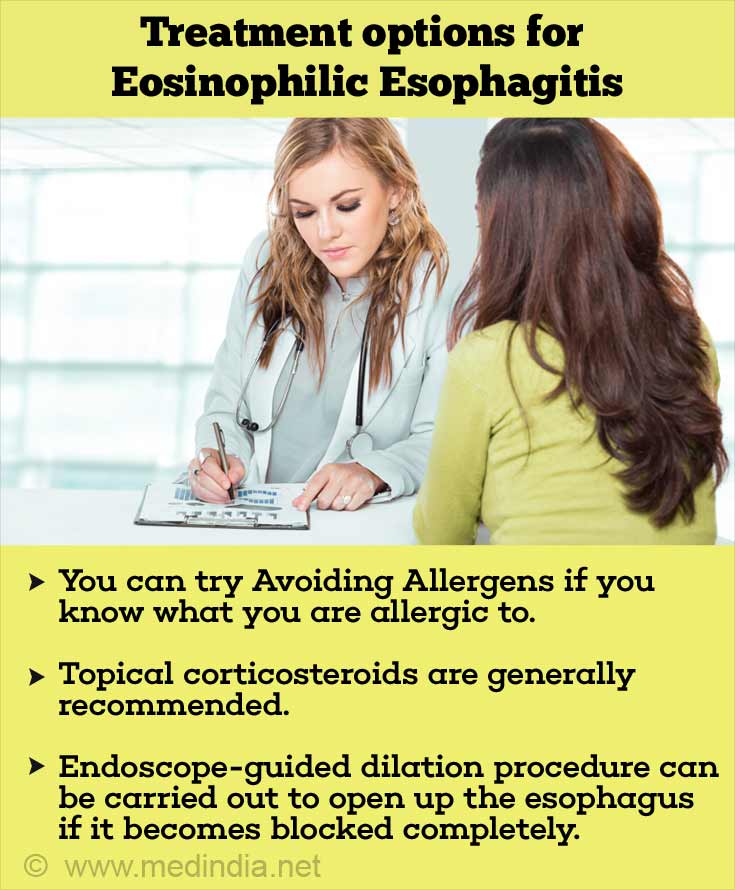 What are the Risk Factors for Eosinophilic Esophagitis?

The major risk factors for EoE include the following:

Esophageal Disorders
Esophagus is the tubular structure that carries food, liquids and saliva from mouth to the stomach. esophageal disorders are common but lack a well-defined pathogenetic mechanism.

Existing Allergies a Risk for Eosinophilic Esophagitis for Children
Children with existing allergies should be screened for an emerging severe chronic food allergy called eosinophilic esophagitis (EoE). A recent study finds that EoE may be a late manifestation of the allergic march.

Protein 'calpain 14' Responsible for Damage in Eosinophilic Esophagitis
Controlling the production or activity of protein calpain 14 may prevent the development of eosinophilic esophagitis in patients.

Difficulty Swallowing Symptom Evaluation
Difficulty with swallowing or dysphagia is a problem, which if left untreated, could cause malnutrition and seriously affect the patient. Treatment of dysphagia depends on the underlying cause.

Difficulty in Swallowing or Lump in the Throat (Dysphagia) Symptom - Glossary
What are types of lumps in throat and what causes them? Can they be a sign or symptom of something more sinister? Understand these lumps better.

Food Allergy Disorder - The Understudied Health Area
Researchers have found that eosinophilic gastritis is a systemic disorder that has high levels of eosinophils in the blood and gastrointestinal tract.