The Drugs and Cosmetics Rules states that schedule H and Schedule H1 drugs are to be sold only with the prescription by a registered medical practitioner.

The Drugs and cosmetic Act, 1940 was passed in British India to regulate the manufacture, distribution, and sale of drugs in the colony. This Act also governed the import of the drugs in the country. A related Drugs Rules were passed in 1945. Later on, after Indian independence, the Act underwent various amendments from time to time and is now known as the Drugs and Cosmetics Act, 1940.

The important amendments in the Act were as follows:(1✔ ✔Trusted Source
UPDATES ON THE AMENDMENTS MADE ON THE DRUGS AND COSMETICS RULE 1945 (AMENDMENT RULES 2018) ON LABELING OF MEDICINES RULES 96 & 97

However, the primary objective of this act remains constant. The Act clarifies that the drugs and cosmetics that are sold in India should always be safe, effective and meet stringent quality standards.

The drug sales have increased over the years and new drugs are constantly being added to the drug formulary. To ensure safety of end consumer the drug regulatory body schedules the drugs according to their therapeutic effect.

Go to source) substances, over the counter drugs and medical devices, with a view to promote safety in public health.

The Drugs and Cosmetic Rules of 1945 allocated provisions for the classification of the drugs under various given schedules including details regarding the storage, display, sale and the prescription of an individual schedule.(3✔ ✔Trusted Source
The Drugs and Cosmetics Rules, 1945

Other schedules included A,B,C,E,F,K,M,N,O,P,Q,R,S,T,U,V,Y. Schedule F has sub-categories of F -I, F-II,F-III and F-F while schedule P has a sub category called P-I.

What are Schedule H Drugs?

This schedule contains a list of drugs that can be sold only against the prescription of a registered medical practitioner. Another provision needs to be followed is that, only the required amount of medications mentioned in the prescription can be dispensed. These drugs can be supplied only to the licensed parties.

The drug label must exhibit the text Rx and Schedule H drug warning: To be sold by retails on the prescription of a Registered Medical Practioner only.

As per the notification on 16th March 2006 released by the Department of Health under the Ministry of Health and family welfare there are 536 Schedule H drugs.

Advisory Board, and the present list includes about 536 drugs.

Why was Schedule H1 Introduced

The schedule H1 drugs were mainly allocated to restrict the selling of antibiotics through over the counter (OTC) sales, after it was noted that any number of these drugs could be bought from pharmacies across India without any limitations.

Irrational prescribing of antibiotics and other drugs by doctors and chemists lacking a registered pharmacist has contributed to the increasing antibiotics resistance and tolerance of psychotropics. In response to these serious issues, antibiotic forums, scientific meetings and symposiums were conducted by medical fraternity and various educational institutions.

As a result, the Government of India issued a gazette notification, GSR 588 (E) dated on 30. 08. 2013 regarding schedule H1 Drugs which shows the importance of this schedule.(5✔ ✔Trusted Source
Health Ministry notified on implementation of Schedule H1 drugs in D&C rules | No more OTC selling of antibiotics

To dispense these drugs two main criteria have to be followed strictly.

1) The drug supplied under the schedule H1 specification should be recorded in a separate register at the time of supply, mentioning the name and address of the prescriber, name of the patient, and the name of the drug along with the quantity supplied. This register has to be maintained confidentially up to three years and should be open for inspection.

2) The schedule H1 drugs should be labeled with the symbol Rx in red, clearly displayed on the left top corner of the drug label. The label should also bear the following words in a box with a red border.

-It is dangerous to take this preparation except in accordance with the medical advice.

-Not to be sold by retail without the prescription of a Registered Medical Practitioner."

The schedule H1 drug list, however, shows no limitation of using the drugs as topicals or for external use such as in ophthalmic, ear or nose preparations.

It is a known fact that a gazette notification alone will not help. Apart from this several measures have to be executed by the respective authorities at all levels.

They are as follows:

a) Surveillance of OTC sales

b) Studying patterns of antibiotic sensitivity and resistance 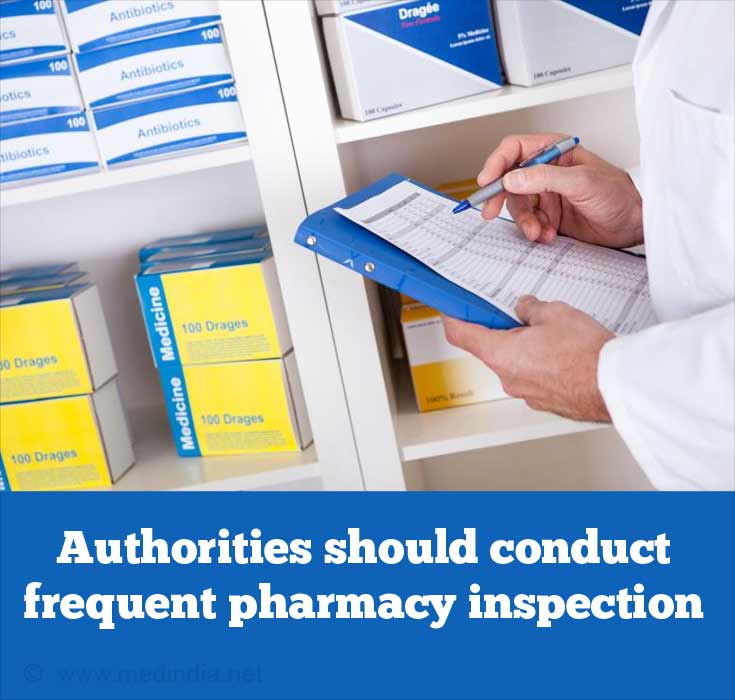 Illegal drug trafficking activities can be eliminated by categorizing drugs as scheduled drugs; this ensures patient health and safety. Ultimately, the registered pharmacists should firmly understand their responsibility in adequately managing drugs being sold through their pharmacy under the drugs regulatory law.