Drugs That Can Make You Feel Tired

Fatigue caused due to medication can disturb the daily activities of a person. Such fatigue needs medical attention as it can also affect the person emotionally and psychologically

Medindia » Health Information » Drugs That Can Make You Feel Tired

Drugs That Can Make You Feel Tired

Fatigue is a condition where the person is constantly feeling tired or overworked. The energy levels are low, and the person feels exhausted, even after taking rest. The person is unable to concentrate on work.

It generally goes away after taking complete rest under a low-stress environment, or post-recovery from the illness or trigger that causes it.

Fatigue can be caused due to

Fatigue affects the person physically, emotionally as well as psychologically.

What is Medication-Related Fatigue?

Some prescription drugs, as well as over-the-counter medications, can cause fatigue as an adverse effect, where the patients feel lethargic or exhausted all the time.

The side effects of these medicines can be dangerous; hence, precautions must be taken when driving or operating machinery or doing any such activity.

The level of fatigue caused will depend on:

What are the Medications that Cause Fatigue?

The categories of drugs known to cause fatigue are:

There are different types of blood pressure medications.

The latest class of drugs known as renin inhibitors are also known to cause fatigue as a side- effect; an example is aliskiren.

Blood pressure medications slow down the pumping of the heart and depress the central nervous system, leading to fatigue.

These medications are used to treat gastroesophageal reflux disease (GERD).

PPIs like esomeprazole, lansoprazole, pantoprazole reduce the levels of magnesium in the blood, leading to fatigue and weakness.

These are also known as tranquilizers and are prescribed for their sedative or hypnotic effect or as anti-depressants.

The commonly prescribed tranquilizers or sleeping pills include alprazolam, diazepam, and lorazepam. These dampen or depress the central nervous system, thus causing fatigue.

Antihistamines like diphenhydramine and fexofenadine are prescribed to get relief from allergies due to some diseases or the common cold.

They depress the central nervous system, causing drowsiness and tiredness.

These are used to treat depression, anxiety-related disorders, obsessive-compulsive disorder and hormone-mediated disorders.

The commonly used antibiotics like azithromycin, cephalexin, sulfamethoxazole are known to cause fatigue, and their package insert too lists fatigue as a potential side effect.

Diuretics are prescribed to treat high blood pressure, glaucoma, edema and other conditions.

These interfere with levels of electrolytes like sodium, potassium, and chloride in blood. These imbalances cause muscle weakness, joint aches, and extreme fatigue.

Drugs for chemotherapy are known to cause fatigue, as they may destroy healthy cells, in addition to the cancerous cells.

Opioids are a class of drugs which include heroin, oxycodone, codeine, morphine. These are prescribed as pain relievers. They are generally safe to use under supervision; however, at times, they can cause extreme fatigue.

Street drugs, which commonly include marijuana and cocaine, in extreme conditions, affect the brains functioning which could lead to seizures and chronic fatigue. 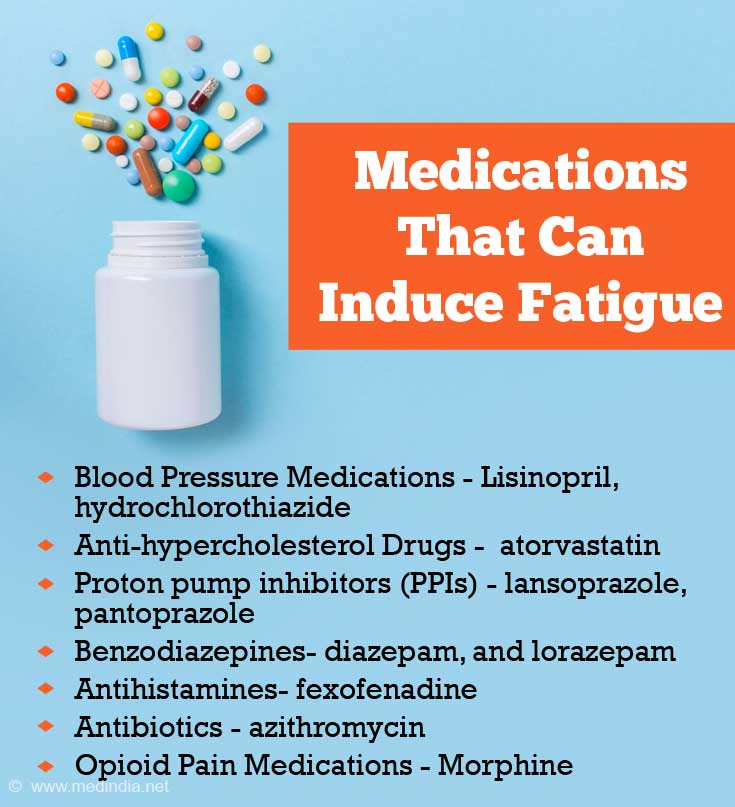 What are the Symptoms and Signs of Fatigue?

The typical symptoms of fatigue include:

How do you Treat Fatigue?

The patient must consult a doctor if fatigue symptoms are persistent and everyday activities are affected.

It is time to see a doctor if a person often experiences:

The doctor would treat fatigue by treating the main cause of fatigue or the symptoms associated with fatigue.

Some ways to treat fatigue include:

What are the Risk Factors and Complications of Fatigue?

How do you Avoid or Rationalize Drugs that Cause Fatigue?

If a person feels that the fatigue symptoms could be due to a medication being consumed, the physician or healthcare provider must be consulted. The medicine must be discontinued, or the dose varied, based on the advice of the healthcare provider.

The healthcare provider may also suggest consuming the fatigue-causing medication at a different time of the day, to reduce the effect of fatigue on daily activities.

After consultation with a healthcare provider, classic histamines like diphenhydramine or fexofenadine must be replaced with a newer generation of antihistamines like loratadine and cetirizine, which do not cause fatigue.

Dizziness and Vertigo: Know the Difference Dizziness is a feeling of being faint or unsteady whereas Vertigo is a feeling that you or your surroundings are spinning when there is no actual body movement. Vertigo is mostly caused by inner ear problems.