Cystic hygroma is a lymphatic malformation, a birth defect characterized by fluid filled sacs present on the head and neck of newborn babies or may appear later and can be treated

Written by Dr. Lakshmi Venkataraman, MD
Medically Reviewed by The Medindia Medical Review Team on May 16, 2018

What is Cystic Hygroma?

Cystic hygroma is a collection of fluid filled sacs (cysts) present on the head and neck (75 percent), usually on the left side and armpit of newborn babies although it can present later also. It results due to a malformation of the lymphatic system of the developing fetus within the womb. The condition was first described by Wernher in 1843

The lymphatic system is a part of the immune system and involved in the transport of white blood cells (which function as defence mechanism against infection and foreign agents) as well as in removing the excess fluid that may be present in the subcutaneous tissues, thus preventing fluid accumulation and edema

Since the lymphatic system fails to form properly, there are blockages in the lymphatic network and fluid filled sacs form usually between the ninth to 16th week of pregnancy.

Cystic hygromas affect approximately 1 per 6000 live births and can affect children of any race and both boys and girls equally.

What are the Causes of Cystic Hygroma?

The exact cause of cystic hygroma remains unclear. They can develop due to genetic disorders or environmental influences. One or more growths may be noted at the time of diagnosis.

What are the Symptoms and Signs of Cystic Hygroma?

How do you Diagnose Cystic Hygroma?

This refers to diagnosis after the baby is born.

How do you Treat Cystic Hygroma?

Cystic hygromas diagnosed when the baby is in the womb are not treated. Instead the doctor will closely monitor the babys health. There is an increased risk of miscarriage and intrauterine fetal death. Sometimes prenatal cystic hygromas disappear before birth. If there is spontaneous disappearance of the cystic hygroma by 20 weeks of pregnancy, the chances of chromosomal abnormalities are less.

One should not puncture the cyst or drain the swelling without medical supervision. It can lead to severe bleeding or infection.

What is the Prognosis of Cystic Hygroma?

The outlook of cystic hygromas is highly variable and can range from good to poor.

The prognosis is favorable if the growth is completely excised. However, if the entire cystic hygroma tissue is not removed, there is a 15% chance of recurrence.

Longterm outlook is less favorable when the cystic hygroma occurs in fetuses and in children with excessive neck thickening. Also, if the fetus also has associated genetic abnormalities the prognosis is poorer. 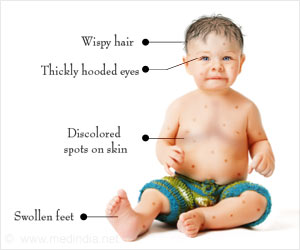 Noonan Syndrome
Noonan syndrome is a genetic disorder that affects different parts of the body. It is caused by changes in one of various autosomal dominant genes.
READ MORE

Turner Syndrome
Turner syndrome, a genetic developmental disorder in females is caused by a missing or incomplete X- chromosome. Girls are short and have dysfunctional ovaries.
READ MORE
Sign up for Wellness Consult a Doctor Sign up for Selfcare