What is Cushings Syndrome?

Cushings syndrome is a group of symptoms caused due to high levels of cortisol in the body. It is also called as hypercortisolism. It is an endocrine disorder.

Every year, approximately 2-3 people per million suffer with Cushings syndrome. Generally, it affects people of 20-50 years of age and women are affected three times more often than men. Further, a not so severe form of Cushings syndrome without all the symptoms is more common. This syndrome has also been found to occur in other animals including dogs, cats and horses.

Cushings syndrome develops due to high levels of cortisol in the body which can go up due to the following reasons:

1. Exogenous Cushings syndrome or Due to Causes outside the body - Treatment with Steroids (corticosteroids):

Intake of oral steroids such as prednisone in high doses over an extended period of time to treat inflammatory diseases, such as rheumatoid arthritis lupus and asthma, or to prevent the body from rejecting a transplanted organ, can lead to Cushings syndrome (also called iatrogenic Cushings syndrome. Iatrogenic means illness caused by medical treatment). Further, repeated injections of steroids for treating joint pain, back pain and bursitis can also lead to high levels of cortisol. The use of steroid inhalers (taken for asthma) and steroid skin creams are generally not associated with Cushings syndrome but in some individuals, these can cause Cushings syndrome if taken in high doses.

2. Endogenous Cushings syndrome or Overproduction of cortisol by the body:

This happens due to the overproduction of cortisol by the adrenal glands due to the following reasons: 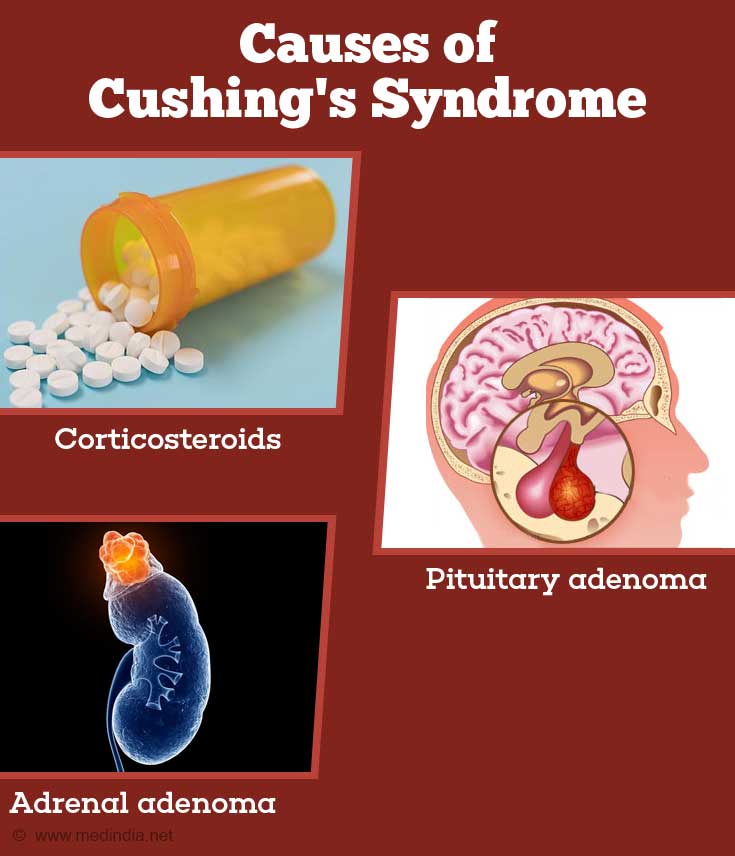 What are the Symptoms and Signs of Cushings Syndrome? 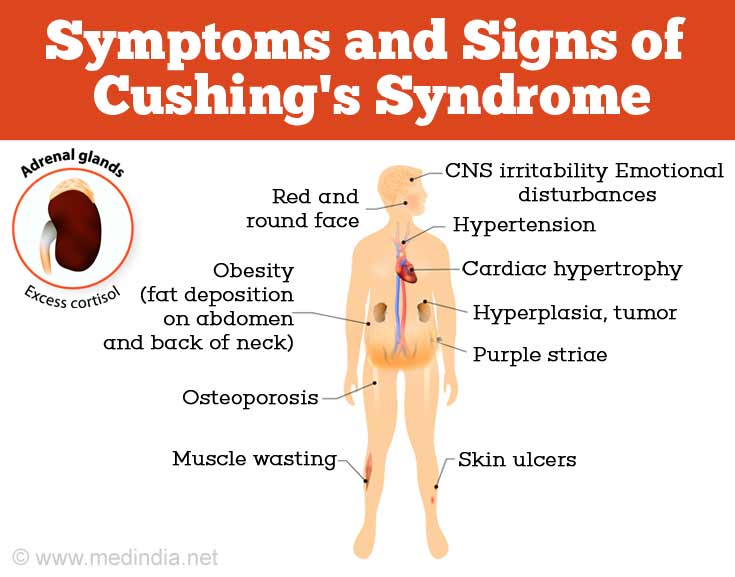 How do you Diagnose Cushings Syndrome?

History and Physical examination: If you have a history of longterm steroid intake, then the doctor will do a detailed physical examination to look for the effects such as rounding of the face (moon face), a pad of fatty tissue between the shoulders and neck (buffalo hump), and thin skin with bruises and stretch marks.

Urine and blood tests: These tests measure the cortisol hormone levels in the urine and blood samples. Also, the cortisol levels are measured before and after by stimulation and suppression tests with some hormone medications to accurately determine the cause of these symptoms. 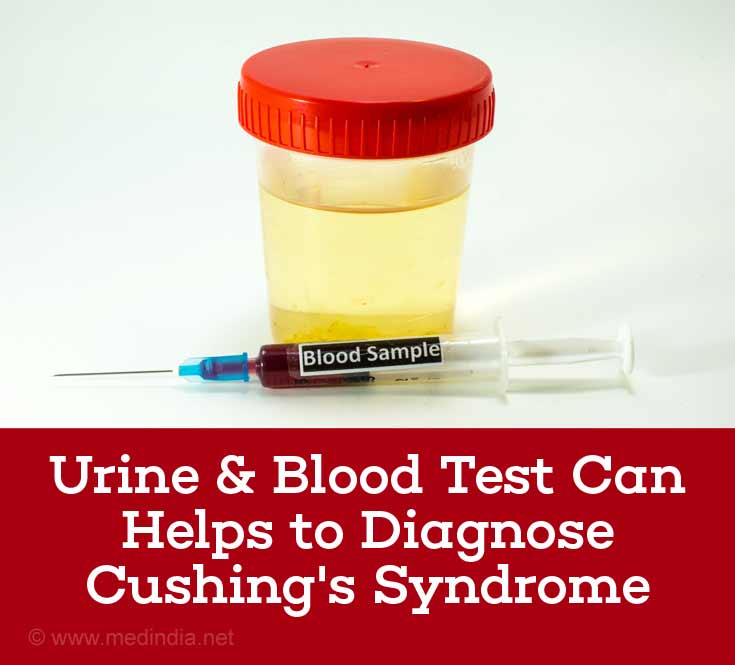 Imaging tests: Scans such as CT or MRI can provide images of pituitary and adrenal glands to detect any abnormality such as tumors.

If levels of ACTH is higher in the petrosal sinus sample as compared to the sample collected from the forearm, it suggests the abnormality in pituitary as a cause of Cushings syndrome. However, if the ACTH levels are similar in the samples collected from the sinus and forearm, it rules out the involvement of pituitary gland in causing Cushings syndrome.

How do you Treat Cushings Syndrome?

The main aim for treating the Cushings syndrome is to reduce the high levels of cortisol in the body and the type of the treatment depends on the underlying cause.  Some of the common treatment methods are:

Drugs which are given to control cortisol production by adrenal glands are mitotane (Lysodren), ketoconazole (Nizoral) and metyrapone (Metopirone). For individuals who are type 2 diabetics and suffering from Cushings syndrome, mifepristone (Korlym) is recommended which does not affect cortisol production, but it interferes with the effect of cortisol on tissues.

In some cases of Cushings syndrome, where pituitary surgery cannot be performed or is unsuccessful, a drug called pasireotide or Signifor (twice daily injections) is given which works by decreasing ACTH production from a pituitary tumor.

What are the Complications of Cushings Syndrome?

If not treated properly, Cushings syndrome will lead to complications such as: 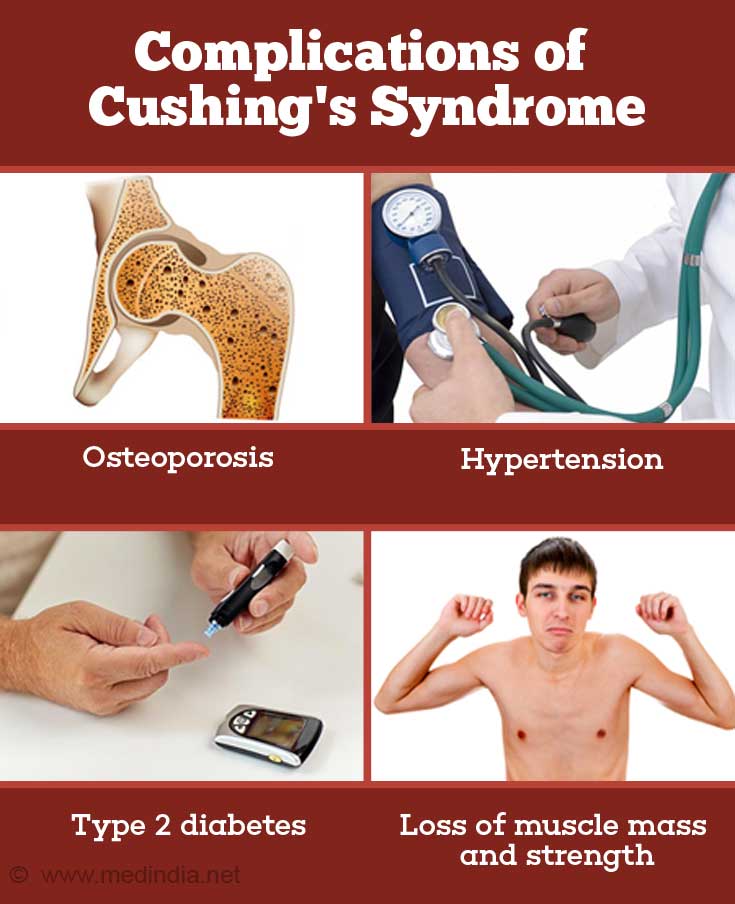 Hand Tremor Symptom Evaluation Hand tremors are unintentional rhythmic movements of the hand that occur either at rest or with motion.

Potential Therapeutic Target for Cushing's Disease Identified A protein that drives the formation of pituitary tumors in Cushing's disease has been discovered by scientists.

Pasireotide This medication is a somatostatin analog (an orphan drug), prescribed for patients with Cushing's disease who failed to get rid of through ...

Mifepristone This medication is a synthetic steroid, used alone or together with another medication, to end an early pregnancy (within 7 weeks of the start of a woman's last menstrual period). It blocks the hormone needed for pregnancy to continue. It is ...

Metyrapone This medication is an endogenous inhibitor used in diagnosis of adrenal insufficiency and in the treatment of Cushing's syndrome (excess amount of cortisol in the ...
Sign up for Wellness Consult a Doctor Sign up for Selfcare
Advertisement
Health Topics A - Z
A B C D E F G H I J K L M N O P Q R S T U V W X Y Z

How to Choose the Best Eczema-Friendly Moisturizer for Children?
View all
Cushing Syndrome - Related News
Low Levels of Cortisol Could Be Linked to Antisocial Behaviour in Adolescent Boys
Relocation of Rural Natives to Urban Areas Elevate Cortisol Levels and Risk Of Diabetes
How Stress Hormone Cortisol Prevents Leukemia?
More News