What is Chronic Bronchitis?

Bronchitis is the inflammation of the lining of the bronchial tubes. These are airways that carry air to the lungs.

Chronic bronchitis is a type of chronic obstructive pulmonary disorder (COPD) that is characterized by a constant cough lasting for a few months. It also causes shortness of breath, wheezing, low grade fever and tightness of chest.

Bronchitis can also be acute- acute bronchitis is very common and mostly viral. It can develop from viral infections like common cold or other respiratory infections. Most cases resolve without treatment, typically within 10-20 days.

An ongoing inflammation of the lining of the bronchial tubes characterized by cough and mucus production lead to chronic bronchitis. It is a serious condition that requires medical attention.

It is a type of chronic obstructive pulmonary disease (COPD), in which the airflow to the lungs is obstructed by mucus production. In COPD, breathing becomes obstructed and labored as the lungs become inflamed, damaged or narrowed.

COPD is caused by prolonged exposure to substances that irritate and damage the lining of the lungs.

Tobacco smoking being the main cause, other causes include long-term exposure to environmental pollutants like fumes, dust or certain chemicals and other lung irritants like second-hand smoke and genetic factors.

People with COPD are at increased risk of developing heart disease, lung cancer and a variety of other conditions.

Anatomy of the Lungs

What are the Causes of Chronic Bronchitis?

Repeated irritation of the lining of the bronchial tubes for long periods causes chronic bronchitis. A few of the main irritants are -

What are the Signs and Symptoms of Chronic Bronchitis?

The main symptom of chronic bronchitis is a hacking cough which is productive in nature. A productive cough brings up clear, yellowish-gray or greenish mucus (phlegm). This type of cough is called a smoker's cough.

For bronchitis to be chronic it has to last for three months with recurring bouts of cough for at least two years in a row.

Other symptoms are similar to those of the common cold or sinusitis, and may include:

What are the Risk Factors for Chronic Bronchitis?

How do you Diagnose Chronic Bronchitis?

The doctor may conduct a thorough physical examination and use a stethoscope to listen closely to your breathing. The doctor inquire about your symptoms and record your medical history. The following tests will then be suggested to make a definite diagnosis.

How do you Treat Chronic Bronchitis?

The main treatment goal for chronic bronchitis is to relieve symptoms, prevent complications and slow the progression of the disease.

To quit smoking is of prime importance for patients with chronic bronchitis, since using tobacco will only increase the damage to the lungs.

How do you Prevent Chronic Bronchitis?

There is no method to prevent bronchitis. However, measures can be taken to lower the risk for both acute and chronic bronchitis.

Healthy Diet: Follow a healthy diet plan including lots of fresh vegetables and fruits. Diet should be low in saturated,, trans fat and cholesterol. 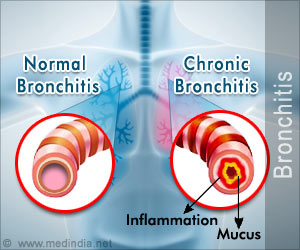 Quiz on Bronchitis
Bronchitis is a common respiratory tract infection. Though it is thought to mainly affect older individuals, young people also commonly suffer from the condition. Test your knowledge on bronchitis by taking this ...
READ MORE

Acute Bronchitis
Acute bronchitis is a short term inflammation of the bronchi of lungs. It is usually caused by a virus.
READ MORE
Sign up for Wellness Consult a Doctor Sign up for Selfcare