What are the Causes of Congenital Adrenal Hyperplasia (CAH)?

Congenital Adrenal Hyperplasia (CAH) is caused by the deficiency of steroid hormone synthesizing enzymes, which occur due to mutations in their corresponding genes. For example, the most common form of CAH, accounting for 90-95% of cases, occurs due to 21-hydroxylase deficiency, which results from mutations in the CYP21A2 gene.

Mutations in the genes lead to deficiency in the enzymes, which lowers the levels of hormones like cortisol and/or aldosterone and over-production of androgens such as testosterone.

Cortisol regulates energy levels in the body, blood sugar levels, blood pressure, as well as the bodys response to injury, stress, and illness. Aldosterone helps to maintain optimal levels of sodium and water, which in turn, regulates blood pressure. Any fluctuations in these hormones can give rise to symptoms and signs of CAH.

What are the Symptoms & Signs of Congenital Adrenal Hyperplasia (CAH)?

The symptoms and signs of CAH depend on the type of CAH, which include the following:

Symptoms also depend on the age of diagnosis and the sex of the patient. Some of the common symptoms in different categories of patients include the following:

Symptoms in Both Males and Females 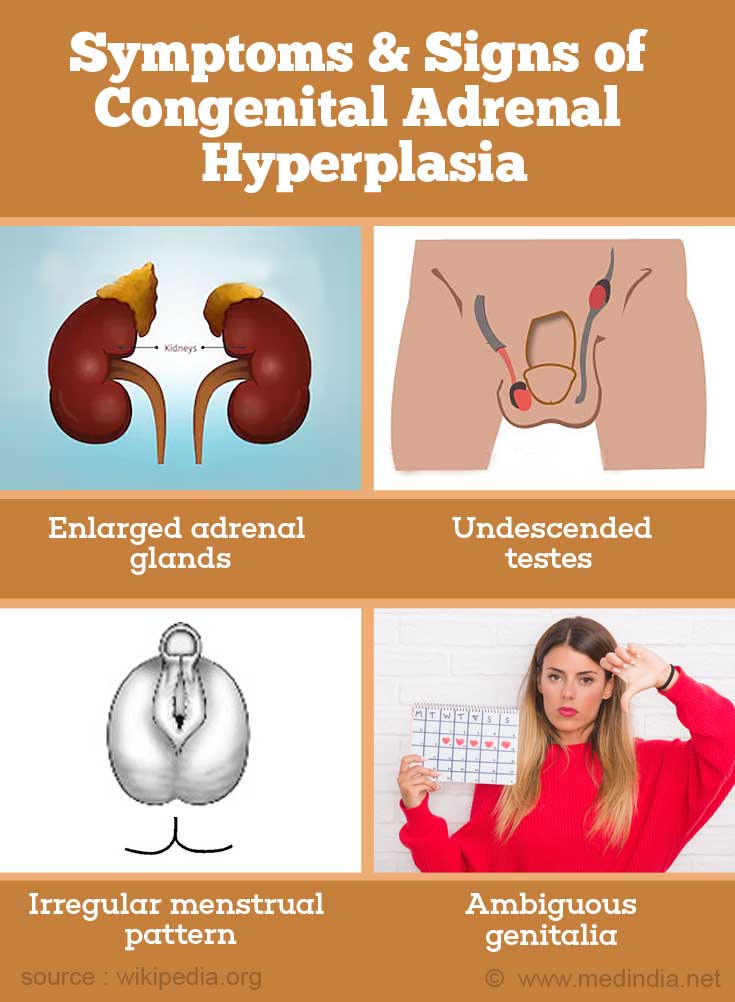 What is Adrenal Crisis?

The consequences depend on the type of Congenital Adrenal Hyperplasia (CAH) and its severity. A major consequence of classic CAH is the occurrence of adrenal crisis, which is caused by extremely low levels of blood cortisol. Adrenal crisis is life-threatening and is a medical emergency that requires prompt treatment. The symptoms include -

Aldosterone production may be impaired, resulting in low sodium and high potassium levels in the blood.  Adrenal crisis doesnt occur in non-classic form of CAH.

Another consequence is the occurrence of fertility problems, both in males and in females. This can occur in case of classic as well as non-classic forms of CAH.

Adrenal Gland Disorders Adrenal gland disorders arise when the adrenal glands do not work properly. Adrenals may produce too much hormones or too little hormones.

Disorders Included in Newborn Screening Disorders included in newborn screening in US and India are discussed. Most disorders are either inherited disorders or developmental defects in vital organs such as heart. Early diagnosis and prompt treatment of these are key to overall improved ...
Sign up for Wellness Consult a Doctor Sign up for Selfcare
Advertisement
Health Topics A - Z
A B C D E F G H I J K L M N O P Q R S T U V W X Y Z