What is the Microgravity of Space?

Earths gravitational force produces an acceleration of approximately 9.81m.s2 at ground level. The general misconception is that gravity does not exist in space either aboard spaceships or space stations in lower Earth orbit (LEO). Typical LEO ranges between 120-360 miles above Earths soil, and at this distance the gravitational field is still quite strong, roughly 88% of that felt at the ground. Therefore, what is often referred to as zero gravity is actually microgravity, and this is an important difference as what is seen as objects or astronauts floating in space is in reality them in a constant state of free fall.(1✔ ✔Trusted Source
What is Microgravity?

Go to source) Therefore, objects or astronauts are falling around the Earth at the same rate as the orbital speed of their spacecraft, which is approximately 17,500 miles/hour (approx. 28,000 km/hour), providing the same effect as real microgravity would give. 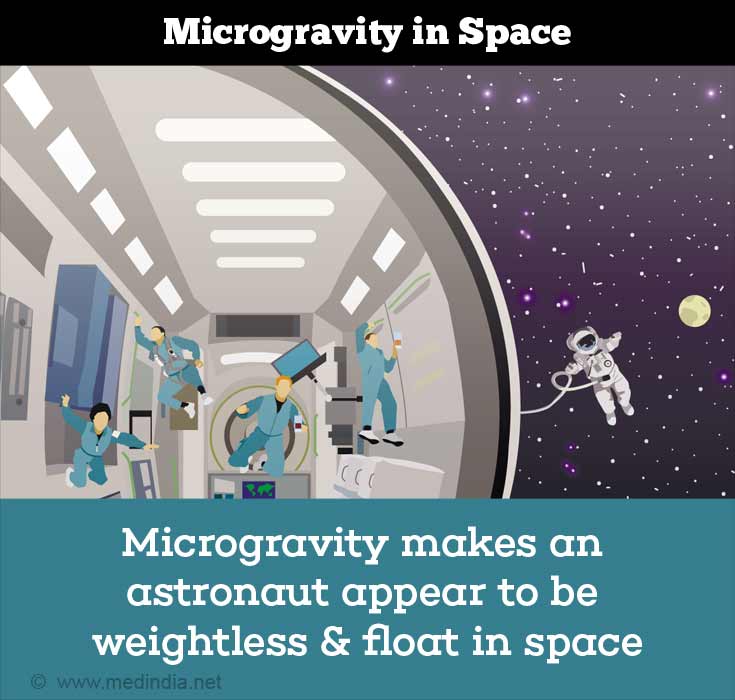 How Microgravity Affects the Human Body

When humans are exposed to the microgravity of space, all body systems are affected. Bones that are no longer required to support the weight of our bodies and hence lose their mass continuously, especially in the lower limbs. Skeletal muscles that are not needed to counteract the effects of gravity suffer a great degree of atrophy, and the immune system seems to become less active in microgravity.

In space missions, astronauts also present a reduction in the number of red blood cells, which is called space anemia. The vestibular system suffers from the moment of insertion into microgravity, causing a condition called space motion sickness that is known to affect 70% of astronauts in the first 72 hours of a space mission. But, what happens to the cardiovascular system in space?(2✔ ✔Trusted Source
Human Pathophysiological Adaptations to the Space Environment

Traveling in Space Could be Bad for Your Joints Bad joints could be a potential hazard for future space travelers as a new study finds early signs of cartilage breakdown and arthritis-like degradation.

Better Ways to Fight Muscle Loss during Space Flights Space flight-related losses in muscle mass and strength are a vital concern for long space exploration missions. Therefore, finding out personalized space medicine for each astronaut on Earth before they embark on a long-term mission to space could ...