Blount's disease is a developmental disorder in which differential growth occurs at the tip of the shinbone, resulting in bowed legs.

What is Blount's Disease?

Blounts disease is a developmental disorder affecting the top portion of the shinbone (tibia), which leads to progressive lower leg deformity resulting in bowed legs (genu varum). Normal (physiological) bowing that occurs in babies improves with age and resolves within 2 years of age. However, bowing in Blounts disease does not improve and gets worse with age. This disease is also called tibia vara and is characterized by differential growth of the physis (region of growth or growth plate), which is not able to take the load from the upper part of the body. Growth of the physis occurs in the lateral (outer) aspect, but not is the medial (inner) aspect. As a result, the lower portion of the leg bows outwards, which can lead to leg length discrepancy.

Origin of the Term "Blount's Disease"

The disease is named after Walter Putnam Blount, an American pediatric orthopedic surgeon, who first described the disease in 1937.

The National Institutes of Health (NIH) has classified Blounts disease as a rare disease. This is because it affects less than 1% of the U.S. population, where the disease has been studied most intensively. The disease is more prevalent in obese children and children of African and Hispanic ancestry.

What are the Types of Blount's Disease?

Blounts disease can be categorized into two types:

An intermediate form  called Juvenile Blounts disease  has been suggested, which includes children between the ages of 4-10 years.

What are the Causes of Blount's Disease?

The exact cause of Blounts disease is not clearly understood. However, some possible causes have been suggested,including the following: 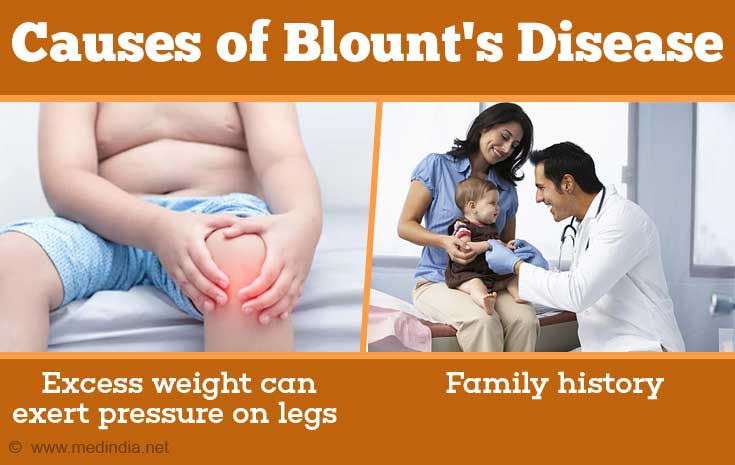 What are the Symptoms & Signs of Blount's Disease?

Some of the common symptoms and signs are briefly highlighted below: 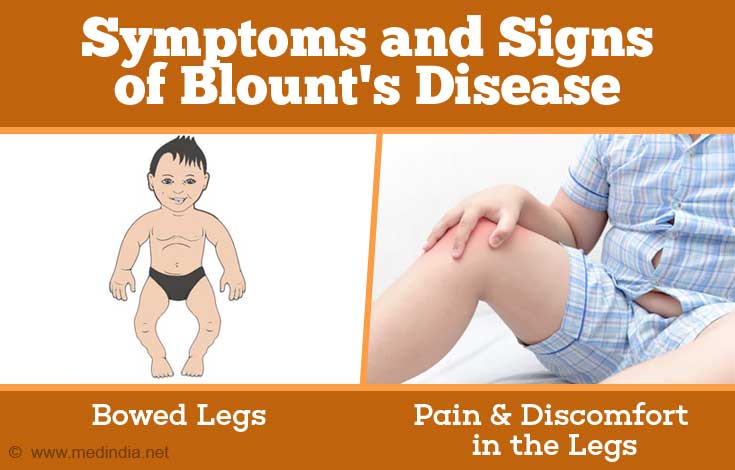 How do you Diagnose Blount's Disease?

Diagnosis of Blounts disease is done in 3 steps. These involve a medical history of the patient, followed by a physical exam and X-ray.

How do you Treat Blount's Disease?

Treatment usually involves bracing and/or surgery. These are briefly highlighted below: 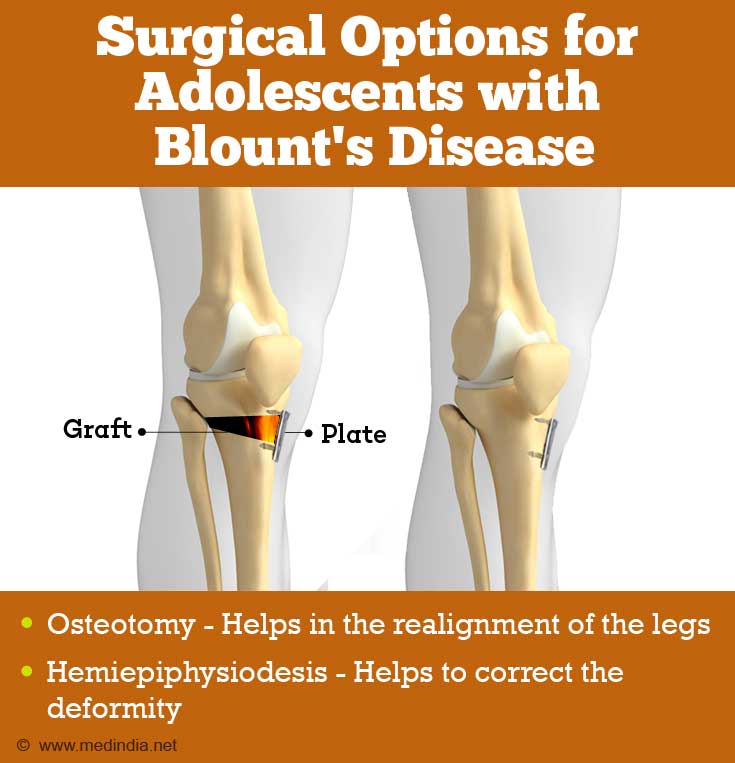 What is the Prognosis for Blount's Disease?

The outlook is best in case of early diagnosis and treatment, either by bracing or surgery. Bracing is usually less beneficial in girls and in obese children. However, in case of a successful surgery, no residual deformity or disability will be present, thereby greatly improving the prognosis.

Tibia (Shinbone) Shaft Fractures A tibial shaft fracture is an injury that occurs to the tibia, which is one of the long bones of the leg. Causes, symptoms, diagnosis of shinbone are discussed.

Childhood Obesity Childhood obesity is one of the most serious health challenges in the developing countries and needs to be understood and tackled effectively.
Sign up for Wellness Consult a Doctor Sign up for Selfcare
Advertisement
Health Topics A - Z
A B C D E F G H I J K L M N O P Q R S T U V W X Y Z