What is Bleeding Diathesis?

Bleeding or hemorrhagic diathesis represents a group of bleeding disorders characterized by an increased tendency of the body to bleed or hemorrhage. The bleeding could occur very easily, without any obvious triggering event or injury. Spontaneous bleeding from the nose, mouth or digestive tract may not indicate any serious condition; but sometimes it can be severe enough to be life-threatening.

Normally when a person gets injured and bleeding occurs, a blood clot is formed to stop the bleeding. There are several substances present in the body, like platelets and clotting factors that aid in this process. When there is a bleeding disorder, the clotting mechanism fails due to several reasons.

Causes and Classification of Bleeding Diathesis

Bleeding diathesis can result from a number of reasons which include increased fragility of blood vessels, impaired wound healing, platelet deficiency or dysfunction, thinning of skin, coagulation, or a combination of these. Bleeding disorders can be inherited (passed on from parent to child) or acquired in your lifetime.

There are three main components that are intrinsic to help the blood clot. They are:

Hence the causes of bleeding and bruising are attributed to abnormalities in platelets, clotting factors or blood vessels.

A. Platelet disorders have symptoms that start of as small red or purple dots on the skin that lead to severe bleeding.

Platelet disorders in turn can be due to:

Acquired disorders occur due to:

DIC if it progresses slowly

Antibodies against factor VIII (or other factors)

Hereditary disorders occur due to

Hemophilia, a hereditary disorder in which the body does not make enough of certain clotting factors. People have excessive bleeding into deep tissues such as muscles, joints, and the back of the abdominal cavity, usually following minor trauma.

Von Willebrand disease that occurs due to a deficiency in the quality or quantity of von Willebrand factor (vWF), that is required for platelet adhesion.

C. Vascular bleeding disorders are characterized by easy bruising and spontaneous bleeding from small vessels. Defects in blood vessels manifest as red or purple spots and patches on the skin, rather than bleeding. The underlying abnormalities are either in the vessels themselves or in the perivascular connective tissue.

What are the Symptoms and Signs of Bleeding Diathesis?

Commonly observed manifestations and clinical features of bleeding diathesis are:

How do you Diagnose Bleeding Diathesis?

There are five studies which are important to the diagnosis of bleeding disorders which include: 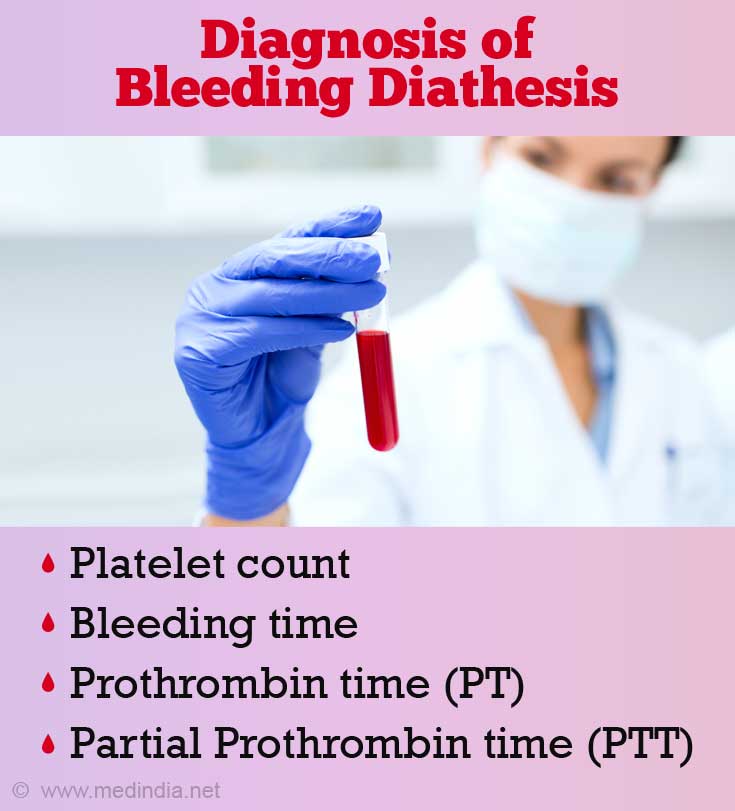 What are the Complications of Bleeding Disorders?

Complications associated with bleeding disorders can be mostly prevented or controlled with treatment. But, if they are not treated on time, they can lead to severe complications

How do you Treat Bleeding Diathesis?

As there is a significant loss of iron during bleeding diathesis, iron supplements may be used to replenish the amount of iron in the body. Low iron levels or its deficiency can result in iron deficiency anemia. In cases where iron supplements do not work, blood transfusions should be used to compensate for the excessive blood loss.

A blood transfusion is also a valuable option in treating uncontrolled hemorrhagic condition. It replaces any blood loss by receiving blood from a donor. The donor and recipient blood are matched first to prevent any complications. 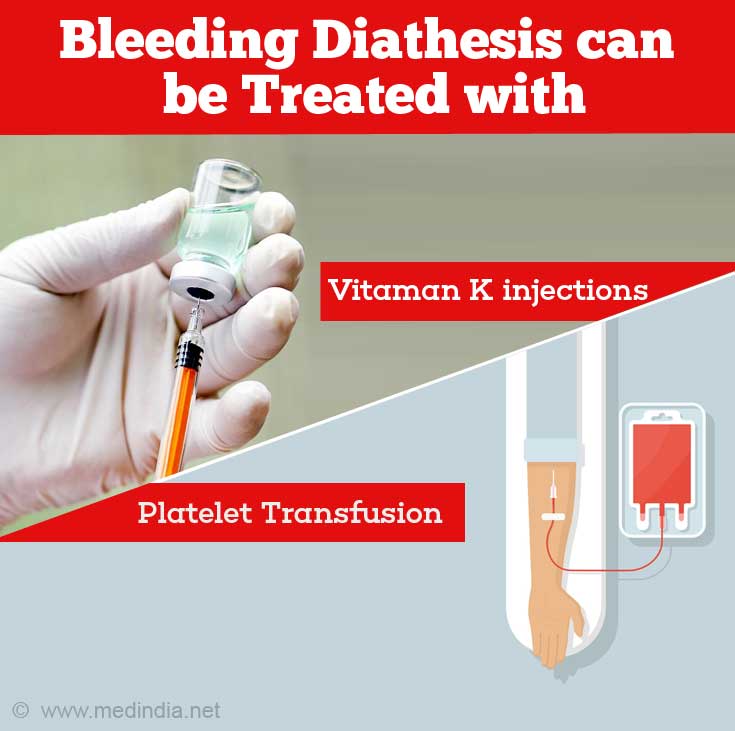 TPE is a treatment that removes plasma from the blood which is then replaced with a substitute. It helps remove large-molecular-weight substances such as harmful antibodies from the plasma. It utilizes automated blood cell separator to ensure fluid balance and maintain a normal plasma volume during the procedure. It is of particular use in conditions like thrombotic thrombocytopenic purpura and atypical hemolytic uremic syndrome.

Other treatment methods are also considered while treating hemorrhagic diathesis.

Antifibrinolytic agents- E.g aminocaproic Acid, tranexamic Acid, desmopressin. Desmopressin is shown to exert a substantial hemostatic effect by inducing the release of von Willebrand factor. It is used to treat or prevent the condition in patints with Von Willebrand disease, hemophilia A and some platelet function defects.

Prehospital Blood Transfusion Linked With Improved Survival Blood product transfusion within minutes of injury or prior to hospitalization is associated with greater survival than delayed or no transfusion.

Measuring the Strength of Individual Platelets to Diagnose Bleeding Disorders Bleeding disorders could one day be diagnosed by putting platelets through strength tests, researchers have proposed.

Quiz on Bleeding Disorders Blood circulates through blood vessels. In case of an injury, bleeding can occur in the organ internally or externally. Under normal circumstances, the blood vessels constrict to reduce the blood flow and a clot is formed with the help of platelets ...

Bleeding Disorders Bleeding disorder is an acquired or an inherited condition, which is characterized by excessive bleeding in the persons affected by the problem.
Sign up for Wellness Consult a Doctor Sign up for Selfcare
Advertisement
Health Topics A - Z
A B C D E F G H I J K L M N O P Q R S T U V W X Y Z