Birth Control Implant is a type of contraceptive to control pregnancy. A minor surgery is required to place the implant under skin of upper arm. It is a safe and effective method

What is a Birth Control Implant?

A birth control implant is a small thin rod that is inserted under the skin on the inside of the upper arm and releases hormone gradually into the body. This hormone, Progestin or Progestogen, prevents pregnancy or contraception.

The birth control or contraceptive implant gives protection from pregnancy for a period of about four years. It is a type of long-acting reversible contraceptive like an intrauterine.

The doctor or nurse injects an anesthetic to make a small patch of the arm numb. Then, they use a special inserter tool to slide the implant under the skin. It is the most convenient and effective method to control pregnancy.

The birth control implant is prescribed as Nexplanon, in the United States. It was earlier sold in Australia, as Implanon, which contained Etonogestrel, a progesterone-like hormone.

How Does an Implant Prevent Pregnancy?

The implant releases the hormone Progestin, which prevents pregnancy in two ways: 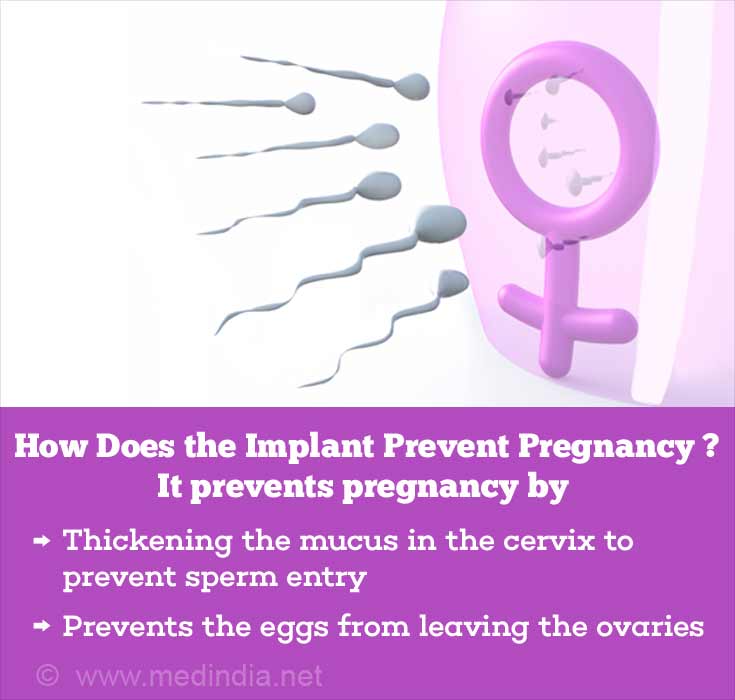 What are the Benefits of Birth Control Implants?

What are the Disadvantages of Birth Control Implant?

The disadvantages of birth control implant include:

The doctor must be consulted if any of the following symptoms are noted:

How Effective is a Birth Control Implant?

The implant is very effective in protecting from pregnancy all day, for up to four years. It is not permanent, hence, if one wants to get pregnant, the doctor or nurse can remove the implant from the woman and she can become pregnant.

The implant is about 99% effective in controlling pregnancy. Statistical reports indicate that 1 in 20 women may still get pregnant, in spite of having implants.

However, the effectiveness of an implant can be reduced by certain medications: 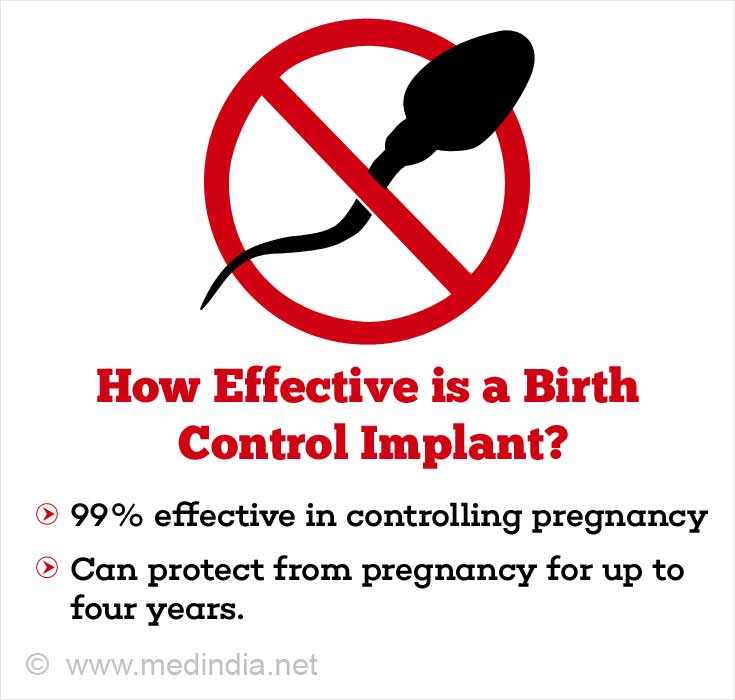 What are the Side Effects of Birth Control Implant?

Side effects with the arm implants are rare. Some side effects which could occur include: 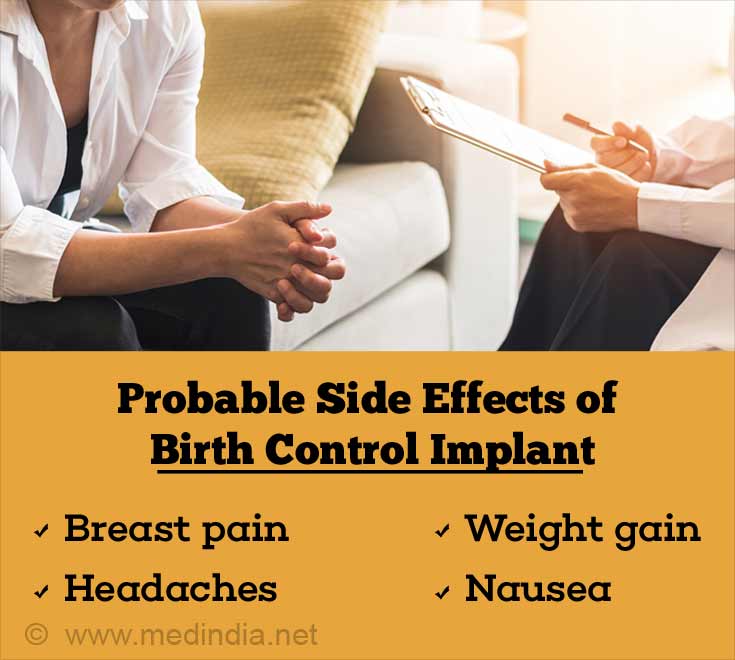 How long does it take for the Birth Control Implant to work?

If an implant is inserted during the first five days of the period, the woman is protected from pregnancy immediately.

However, if the implant is inserted at any other time of the menstrual cycle, some other form of birth control, e.g. female condom, will have to be used during the first week. After that week, the implant starts working and the woman is protected from pregnancy, for a period of about 4 years.

Contraceptive Implant can Help Boost Family Planning in India
The subdermal implant guarantees prevention of unwanted pregnancy for three years at least. It is 99 percent effective in terms of cost and use.

Birth Control Patch
A birth control patch is a new method of contraception for women for once weekly external application and contains both estrogen and progesterone.

Test Your Knowledge on Birth Control Pills
Birth control pills are daily pills that contain hormones to control and change the body's functions to prevent pregnancy. Its main function is to prevent the release of an egg during the monthly menstrual cycle. It also works on the mucus lining ...

Novel Technique may Reduce Implant-rejection and Infection
Controlling of peptide orientation by electric field may reduce infection and rejection of implantable devices.

The Essence of Yoga Drug Side Effects Calculator Hearing Loss Calculator Vent Forte (Theophylline) Nutam (400mg) (Piracetam) Sinopril (2mg) (Lacidipine) Calculate Ideal Weight for Infants Drug - Food Interactions Drug Interaction Checker Post-Nasal Drip
This site uses cookies to deliver our services.By using our site, you acknowledge that you have read and understand our Cookie Policy, Privacy Policy, and our Terms of Use  Ok, Got it. Close