Appendicitis in children produces symptoms of abdominal pain and swelling, nausea, vomiting and fever. Surgical removal of the appendix is the only treatment.

What is Appendicitis in Children?

Appendicitis refers to inflammation of a small intestinal projection called the appendix.

Children often complain of stomach ache. From being a childish tantrum for skipping school to a serious medical condition, it could mean absolutely anything. The abdomen can be compared to a Pandora's box. Several organs are clustered together in there and any one of them can cause pain. Amongst these is a tiny, finger-shaped tubular projection from the intestines called the vermiform appendix. It has virtually no function but in case it gets inflamed, it can create havoc. Acute appendicitis refers to the inflammation of the appendix, resulting in fever, loss of appetite, severe abdominal pain and vomiting.

What are the Causes of Appendicitis in Children?

Appendicitis occurs as a result of a block in the lumen of the appendix. The appendix possesses a very narrow lumen which can easily get blocked by feces, mucus, parasites or an enlarged lymph node. This accumulation acts as a focus for the growth of bacteria. The resulting infection causes swelling of appendix and collection of mucus. In some cases, the excess mucus causes the appendix to burst resulting in spilling over of the infectious contents into the abdominal cavity. This can cause inflammation of the inner abdominal lining called the peritoneum. The blood supply to the appendix might also get cut off causing cell death and necrosis of the appendix. This can be very dangerous and life threatening.

What are the Signs and Symptoms of Appendicitis in Children?

Unlike adults and adolescents, children do not usually present with characteristic symptoms. Hence, the diagnosis is tricky and chances of complications are more frequent.

The pain of appendicitis begins as a vague discomfort felt in the navel or belly button region. After a few hours, the pain shifts to the lower right quadrant of the abdomen (belly) and the intensity of the pain increases drastically. The child tends to lie immobile as any movement causes aggravation of pain. The pain does not respond to standard pain killers and antispasmodics. In fact, usage of these drugs masks the symptoms making the diagnosis even more difficult.

Generally, the pain in the abdomen precedes vomiting. Initially, the child complains of loss of appetite followed by an odd sensation of nausea. Vomiting also occurs in cases of food poisoning or gastroenteritis and hence is not a characteristic feature of appendicitis.

Most children with appendicitis present with mild fever or a sensation of feeling warm. A sudden onset of high fever can occur when the appendix has ruptured or the infection has spread to other abdominal organs.

The classical triad of abdominal pain vomiting and fever is seen in only 60% cases and hence the clinical judgment of the doctor plays a crucial role in appendicitis.

Other symptoms of appendicitis including alteration in bowel habits like constipation or diarrhoea.

Parents should seek medical care if the abdominal pain persists beyond 4 hours or if other symptoms like fever and vomiting accompany the pain.

In the case of neonates, irritability could be the only presenting symptom. In children less than 2 years of age, a swollen belly with vomiting and refusal to take food are distinctive symptoms.

What are the Risk Factors for Appendicitis in Children?

Appendicitis affects males more commonly than females. Having a family history of appendicitis increases the risk of developing the disorder but no concrete genetic mechanism has been found. Children with cystic fibrosis are found to be more prone to appendicitis.

How do you Diagnose Appendicitis in Children?

Tests done in cases of suspected appendicitis include the following:

A complete blood count helps in arriving at a diagnosis of an acute infection. The white blood cell (WBC) count is high in most cases of appendicitis. A very high rise in WBC count could point towards perforation of appendix and sepsis.

Routine and microscopic examination of the urine is essential to rule out urinary tract infection which can also present with a similar cluster of symptoms.

Being safe and relatively easily available, ultrasonography remains the investigation of choice in cases of suspected appendicitis. There is no exposure to radiation, no injection of contrast, minimal pain and it is easier to perform in children. It helps in visualizing a swollen appendix, shows the presence of fluid inside appendix and can help locate any abscess formation around the appendix.

The use of CT scan has declined and remains an option in inconclusive cases.

How do you Treat Appendicitis in Children?

There is no medical cure of appendicitis. Surgical removal of the appendix, i.e. appendectomy is the treatment of choice. This is an emergency surgery and a life-saving remedy. Appendectomy can be done in two ways:

a. Open Surgery: The pediatric surgeon makes an incision in the lower right abdomen and removes the inflamed appendix.

b. Laparoscopic Surgery: Keyhole surgery is done in some cases wherein the surgeon makes a few tiny incisions, inserts an instrument with a camera and uses special tools to remove the appendix. The scar is very small in such cases.

Surgery is avoided if the surgeon suspects rupture or sepsis in the child. The child is first stabilized by giving fluids and put on a course of antibiotics to control the infection. The child is operated after the infection is controlled. An abscess will require drainage.

In the case of uncomplicated appendicitis, the child recovers fast. Dietary restrictions need to be followed for few days. Care of the wound is needed till it heals completely.

How do you Prevent Appendicitis in Children?

Appendicitis cannot be prevented. It can occur in any individual at any age. But recent research shows that children, on a diet rich in fiber consisting of fresh fruits and vegetables, are at a lesser risk of developing appendicitis.

Abdominal pain severe enough to cause the child to stop playing or moving should not be ignored.

Over the counter pain-killers should not be given to suppress the abdominal pain without the supervision of a doctor.

Latest Publications and Research on Appendicitis in Children 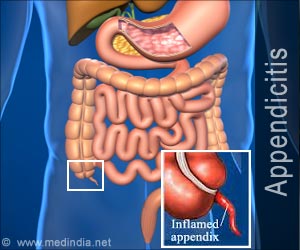 Quiz on Appendicitis
Appendicitis occurs due to inflammation of the appendix. Test your knowledge on appendicitis by taking this ...
READ MORE

Appendectomy - Animation
Slides and animation of Appendicitis and Appendectomy by both Open and Laparoscopic surgical methods.
READ MORE 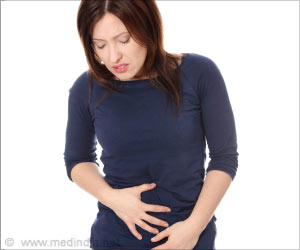 Acute Appendicitis
Case study of acute appendicitis - A 13 year old boy was sent back home from school because he complained of abdominal pain and vomiting. The anxious mother took him to her family physician.
READ MORE
Sign up for Wellness Consult a Doctor Sign up for Selfcare