What are Gut Bacteria?

The digestive tract is the home to a majority of the human microbiota of our body. The gastrointestinal system is just one of the niches of the human body that these microbes live in. The human gut is colonized by 1014 microorganisms which is approximately ten times the number of human cells!

The human gut consists of approximately 300-500 species of bacteria. The stomach and small intestine contain very little bacteria due to the hostile environment in the lumen, namely presence of acid, bile and pancreatic fluid which destroy most bacteria. Additionally, because the propulsive movements push the luminal contents towards the colon, the capacity for bacteria to colonize the stomach and small intestine is limited.

However, the colon is host to numerous species of bacteria in high numbers. Though some of these may be potentially disease causing, many of them offer untold benefits to the human host.

1. Good Gut Bacteria are Being Affected by Common Drugs

The gut bugs that are comprised of trillions of cells and have nearly 1000 diverse species within our digestive system are responsible for more than just basic digestive functions. Recent studies have shown several connections between the presence of gut flora and overall health. They can be the biggest ally in order to stay healthy or be the worst enemies based on the composition of the bacteria.

Technological advancements have enabled us to understand the influence of bacteria in combating diseases that were thought to be completely unrelated. Molecular biology has helped develop the science of probiotics (drinks that aid in the growth of good gut bacteria) which has become the quick fix for many digestive problems.

An imbalance or sudden change in the composition of the microbiota known as dysbiosis manifests a variety of health concerns.

Obesity and Diabetes: Gut bacteria have been linked to obesity in a recent study. Good gut bacteria synthesize butyric acid which helps one feel full quicker and reduce the chances of over eating. It was observed that a change in the microbiota would result in accumulation of fat. A study conducted on obese mice with diabetes showed the presence of similar species of bacteria. When these mice were provided with probiotics and certain microbials, the fat was considerably decreased; reducing inflammation and optimizing blood sugar levels. Including flax seeds in the diet has been proven to change the growth of gut bacteria and increase insulin resistance. Another study on mice conducted by Harvard University showed how gastric bypass surgery changes the composition of gut bugs resulting in a healthy weight.

Irritable Bowel Disease: This is the term used for a variety of abdominal diseases like abdominal pain, cramping, and malnutrition that have no particular course of treatment. Although there is no accepted definition or treatment for this disease, one commonality is the growth of certain bacteria in the digestive tract. In a massive study involving 668 children suffering from Crohns Disease (inflammation of the intestine), it was seen that the count of beneficial gut bacteria was significantly lower. Probiotics help combat these symptoms by increasing the levels of good gut bacteria.

Depression and Mental Illness: The Enteric Nervous System controls and regulates the digestive system just like the brain does for the body. Nearly half the individuals that suffer from irritable bowel syndrome also show symptoms for depression. Mood disorders are very often co-morbid with stomach problems. The association is so strong that often antidepressants are prescribed to those suffering from stomach problems. Studies show that intake of probiotics can drastically improve mood and help the person feel better.

Hormonal Regulation: Estrogen hormone is absorbed from the bloodstream by the liver, deactivated and then wasted through the stool. However, in the presence of good gut bugs, beta glucuronidase is produced that causes the reactivation of this hormone. Bacterial flora keeps problems like osteoporosis, premenstrual syndrome (PMS), menstrual cramps, and breast soreness at bay by regulating estrogen. Combating Fatigue: When the stomach is able to digest materials efficiently and eliminate toxins, the body works at its best and leaves the person feeling energized. Maintaining a healthy microbiota increases interferon levels and prevents Epstein Barr Virus (EBV) infection thereby boosting energy levels and reducing fatigue.

Autoimmune diseases like multiple sclerosis, rheumatoid arthritis, lupus and allergies have been directly linked to gut flora. The pathogens form various toxins and get lodged in the gastrointestinal tract. This triggers inflammation and the occurrence of autoimmune disorders.

Cholesterol Levels:Most of the cholesterol produced by the liver is converted into bile acids, which are stored in the gallbladder and used to help digest fats and ultimately excreted through the colon.

Harmful gut bacteria tend to attack these bile acids, and release a toxic by product. This triggers the liver to convert less cholesterol into bile acids, raising cholesterol levels in the blood which is harmful.

Eating a fiber rich diet promotes growth of good gut bacteria which allow the bile acids that reach the colon to be excreted as such thus ridding the body of excess cholesterol.

Gut microbiota also promotes infant growth and development, improves oral health, fights yeast infections and urinary tract infections among other benefits. While a lot more research is still to be done to uncover the benefits of gut flora, it is clear that the gut is the key to most problems. Maintain a healthy lifestyle with plenty of probiotic foods and expect to have a longer life.

Latest Publications and Research on Amazing Benefits of Gut Bacteria

The Influence on Fat Absorption When Gut Bacteria is Reduced by Antibiotics
Insight into how bacteria in the gut, or lack thereof, influences intestinal mast cells activation and perhaps fat absorption has been provided by researchers.
READ MORE

Type 1 Diabetes Linked to Changes in Gut Bacteria and Inflammatory Profile
Inflammatory profile of the gut and microbiota in patients with type 1 diabetes, evaluated in a study.
READ MORE 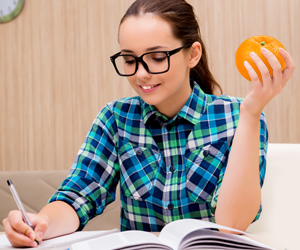 Win Over Exam Stress with a Healthy Diet
A healthy diet during exams helps reduce stress, provides energy, power to perform well, boost memory and prevents fatigue and mood swings.
READ MORE
Sign up for Wellness Consult a Doctor Sign up for Selfcare