Acanthosis nigricans or AN is a skin disorder characterized by discoloration and hyperpigmentation of the skin, often resulting in dark skin around the neck.

What is Acanthosis Nigricans?

Acanthosis nigricans (AN) is a skin condition in which there are patches of velvety brown / black discoloration (hyperpigmentation) and thickening (hyperkeratosis). It usually appears in the folds and creases of the skin, including the armpits (axillae), neck, groins, belly button (navel), forehead, and joints of the fingers or toes. Acanthosis nigricans generally affects individuals suffering from obesity or prediabetes / type-2 diabetes mellitus. Children who exhibit symptoms of AN are more likely to develop diabetes later on in life. Acanthosis nigricans is not a disease per se and is neither contagious nor harmful, but is sometimes a warning sign of an underlying disorder, requiring urgent medical attention.

Origin of the Term

The prevalence of AN varies between 7-74%, depending on age, race, frequency of type, degree of obesity and hormonal (endocrinal) disorders. The prevalence has increased in recent times due to rapid increase in individuals with obesity and diabetes.

How do you Classify Acanthosis Nigricans?

Acanthosis nigricans is classified into the following types:

What are the Causes of Acanthosis Nigricans?

The major causes of AN are briefly highlighted below:

What are the Symptoms & Signs of Acanthosis Nigricans?

Acanthosis nigricans can be recognized by the following distinct symptoms and signs:

Common sites of AN include the following:

Less common sites of AN include the following: 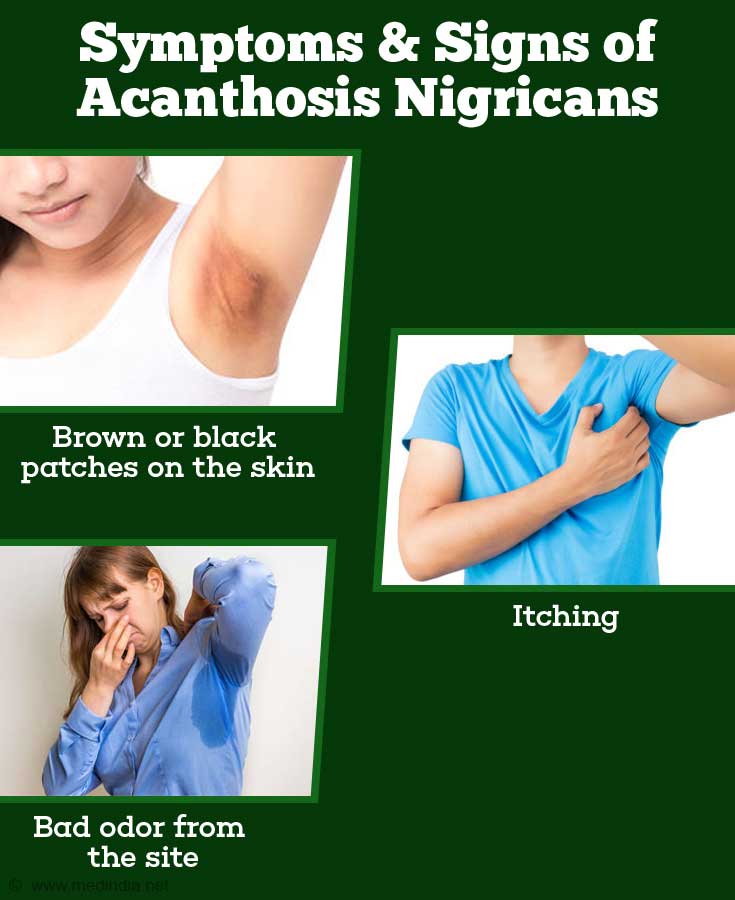 What Could Cause the Rapid Appearance of Symptoms?

The speed in which symptoms of AN appear is of the utmost importance. It generally takes a long time for AN to manifest, ranging from months to years. If there is a sudden onset of symptoms, it indicates that the underlying cause could be cancer. It is therefore very important to consult a dermatologist immediately.

How do you Diagnose Acanthosis Nigricans?

Acanthosis nigricans is diagnosed by the following approaches:

What are the Risk Factors for Acanthosis Nigricans?

Acanthosis nigricans can occur in anyone. However, certain individuals are at a greater risk. The individuals who are at the greatest risk include the following:

How do you Treat Acanthosis Nigricans?

Treatment follows a two-pronged approach. One involves dermatological treatment, which generally aims at improving the appearance of the skin (cosmetic effect). The other is corrective therapy, in which the underlying condition is treated.

MD
1 year experience
Venkateshwara med city , U turn before Redhills toll gate and hospital is on the left, chennai

Top 10 Warning Signs of Diabetes You Shouldn't Ignore
Warning signs of diabetes such as increased thirst, urinary frequency, prolonged infections, and delayed wound healing among others should not be ignored.

Top 7 Signs You Need To Consult Dermatologists Revealed
Our skin is the mirror of internal health. If your battle with acne goes on for long or your skin gets too dry and itchy, then it's time to schedule an appointment with your dermatologist.

Say Goodbye to Dark Inner Thighs by Following These Simple Tips
You can do away with dark inner thighs by avoiding excessive exposure to sun, wearing loose clothes and following a healthy lifestyle.

Obesity in Kids can be Addressed by Family-Based Treatments
The prevalence of childhood obesity has increased so significantly in recent years that many consider it a major health concern of the developed world.
Sign up for Wellness Consult a Doctor Sign up for Selfcare
Advertisement
Health Topics A - Z
A B C D E F G H I J K L M N O P Q R S T U V W X Y Z