Why does a Seizure occur?

A seizure refers to abnormal electrical activity in the brain. Normally, nerve cells in the brain communicate with each other by firing tiny electrical impulses. When these impulses become abnormal, it causes a seizure.

What is an Absence Seizure?

An absence seizure, earlier referred to as petit mal epilepsy involves a sudden brief lapse in consciousness and staring blankly into space. Typically, these spells last less than 15 seconds at a time and often go unnoticed.

Absence seizures are a form of generalized seizure and most often affect children aged between 5 to 15 years.

During an attack, the person suddenly goes blank, stopping what he or she is doing and just stares into space. The attacks may be infrequent or can reach up to 50-100 episodes per day. Physical injury, as might occur due to falling down in other types of generalized seizures, is rarely seen in absence seizure. After the attack passes, the person recovers completely without any residual effects. The seizures are often mistaken for daydreaming or inattention at school.

Since these attacks affect concentration and might interfere with learning, it is necessary to seek prompt medical attention. Most children outgrow these attacks during their teens, though a few may develop true full blown convulsions or grand mal epilepsy, which is far more serious.

What are the Causes of Absence Seizure?

The cause of absence seizures is not known, though it is thought that genetics might play a role.

Increased rate of breathing (hyperventilation) has been shown to trigger attacks of absence seizures.

Persons suffering from absence seizures have altered levels of chemicals (neurotransmitters), which are necessary for normal impulse propagation between nerves.

What are the Risk Factors of Absence Seizures?

Absence seizures have been found to be associated with the following risk factors. 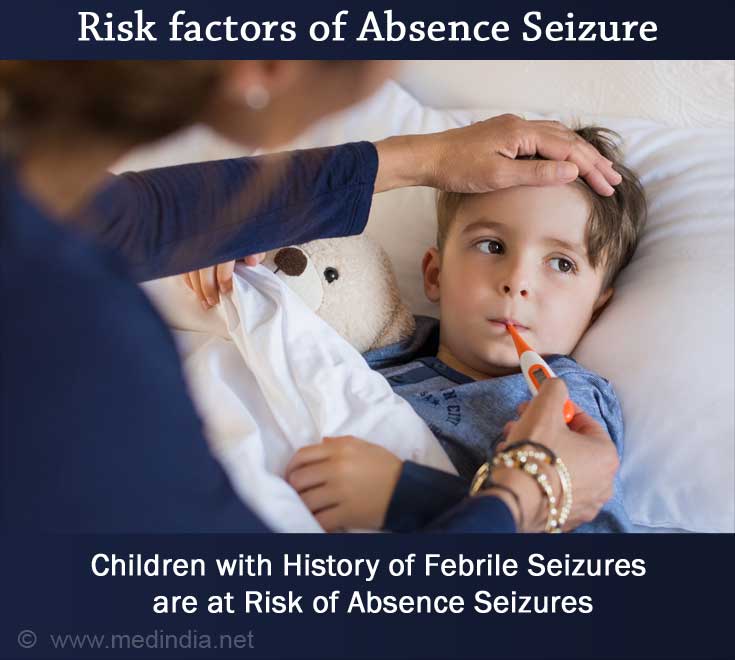 What are the Symptoms of Absence Seizures?

Typically absence seizures involve sudden brief spells of staring blankly into space, the attack not lasting more than 15 seconds. There are no post-seizure symptoms such as headache, confusion or drowsiness.

Other associated symptoms that may be present include

Sometimes a family member might notice these attacks and seek medical attention. Very often, a decline in learning ability is noticed and teachers may also inform parents about the childs frequent lapses of attention or daydreaming during class. 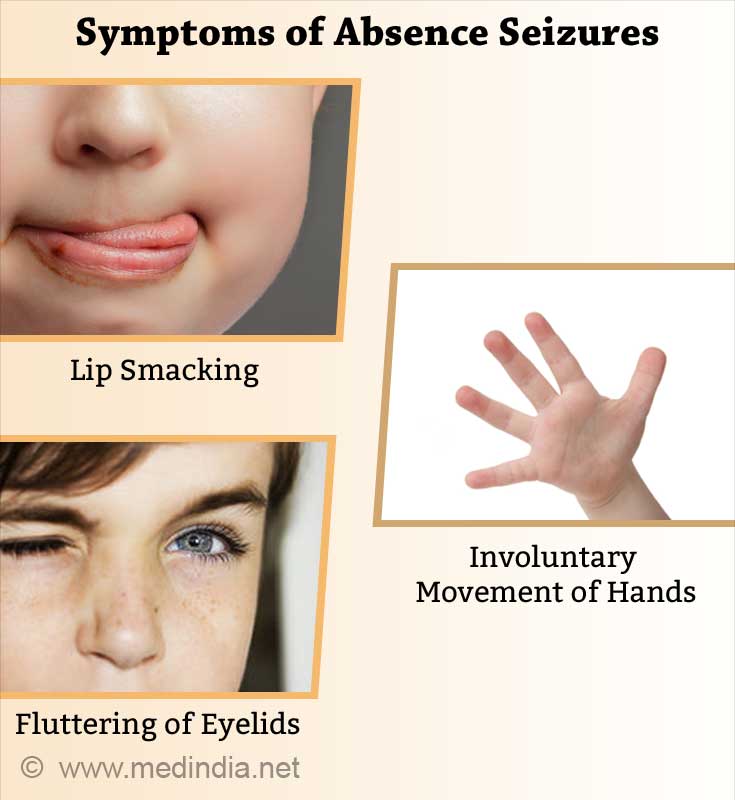 What are the Complications of Absence Seizures?

Most children outgrow this condition by their teens. However, a few children might go on to suffer seizures throughout their lives or progress to grand mal epilepsy.

Other possible complications include

How do you Diagnose Absence Seizures?

Following a complete history and thorough physical examination, the doctor might conduct the following investigations.

Electroencephalogram (EEG)  This is a test done to assess the electrical activity of the brain. It is a simple non-invasive procedure. It is performed by a trained specialist called a Clinical Neurophysiologist. 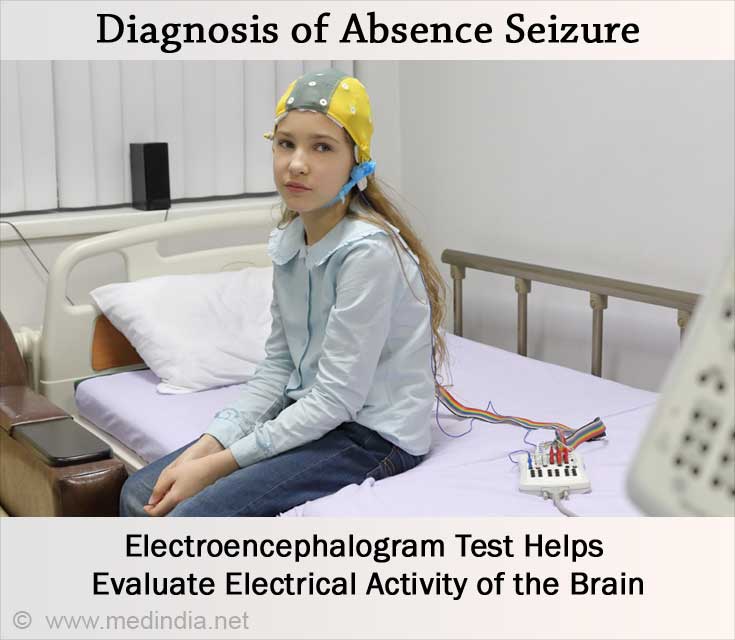 Electrodes that are sensors are attached to the head and connected to a computer. The tracing of the electrical activity will appear on the screen. Alternately, the tracing may also be recorded on a strip of paper. Changes in the normal electrical activity pattern are seen in epilepsy or seizures.

The patient is asked to lie down with his eyes closed and asked to breathe rapidly, see a bright flashing light. Sometimes the patient is sedated and allowed to go to sleep. The activity of the brain under these various stimuli is measured.

The recording is called an electroencephalograph. The typical pattern of EEG in absence seizure is described as spike and wave.

The test might take approximately an hour or so after which the person can resume normal activities.

Radiological Imaging  Brain computerized tomography (CT) scan or magnetic resonance imaging (MRI) may be necessary to rule out other diseases affecting the brain or brain tumor.

Blood Tests  Blood tests such as complete blood count (CBC) may be done. Biochemical tests are done to rule out electrolyte disturbances such as low blood sodium levels which may cause seizures. Blood sugar levels are estimated as alterations in blood sugar levels can cause seizures. Kidney and liver function tests are done to check their functional status and to select the appropriate medication.

Cerebrospinal Fluid (CSF) Analysis  In some cases, a CSF analysis may be needed to look for the presence of abnormal cells, bacteria or fungi and to rule out meningitis, an inflammation of the membranes surrounding the brain.

How are Absence Seizures Treated?

Drugs commonly prescribed for absence seizures include one of the following

Ethosuximide  This is the drug most often prescribed initially for absence seizure, and most cases respond well. 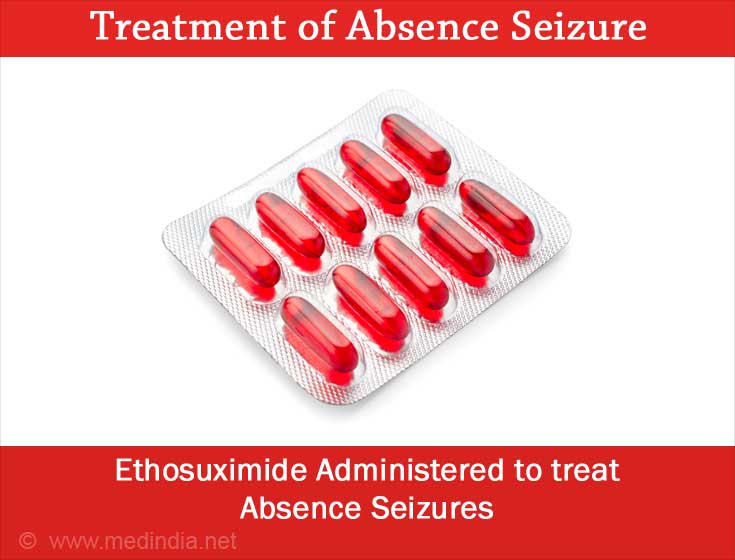 Valproic acid  This is an alternate drug for absence seizure. However, as this drug is associated with birth defects, it should not be used in women who are pregnant or planning a pregnancy. It is also associated with liver damage.

Lamotrigine  This is less effective than ethosuximide or valproic acid, but is associated with fewer side effects.

Most persons can gradually reduce dose of anti-seizure medications under specialist supervision once they remain seizure free for at least 2 years.

How can you Prevent Absence Seizures?

Once absence seizures have been diagnosed, following these measures could help reduce further attacks.

Epilepsy During Pregnancy
Seizures or epilepsy during pregnancy can be fatal for both the mother and child and needs urgent medical intervention. The reasons are often unknown.

Childhood Epilepsy - Approach to a child with seizures
Epilepsy should be examined as a symptom of progressive brain damage and specific etiological groups like the following identified a neonate with neuro metabolic disorder.

Absence Epilepsy on The Rise Among Children
Absence Epilepsy accounts for 4 out of 50 people with epilepsy and is curable as most of the children suffering from the disease respond to treatment.

Quiz on Fits
Fits or Seizures could happen due to a number of reasons. Not all fits qualify to being labeled as epilepsy. Fits manifest in various forms. Test your knowledge on fits by taking this ...

Focal Seizures (Partial Seizures)
Focal or partial seizures are abnormal localized electrical discharges in the brain. They are of two types and exhibit many associated symptoms. Focal seizures can be diagnosed by EEG and brain imaging and treated with drugs and lifestyle changes.
Sign up for Wellness Consult a Doctor Sign up for Selfcare
Advertisement
Health Topics A - Z
A B C D E F G H I J K L M N O P Q R S T U V W X Y Z