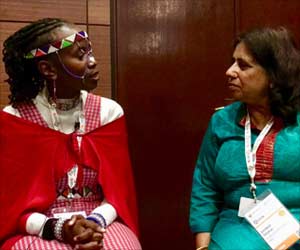 Dressed in colorful attire, Timpiyian Leseni from the Maasai tribe of Africa, turned many heads at the first-ever "WHO Global Ministerial Conference on Ending TB in the Sustainable Development Era: A Multisectoral Response" which was held in Moscow in November 2017.

Looking at her, it was impossible to guess that here was a zoonotic extra-pulmonary TB (EPTB) survivor. Here is her inspiring story based on an exclusive interview Timpiyian gave to Shobha Shukla, Managing Editor of CNS (Citizen News Service):

Advertisement
‘After surviving the deadly disease, Timpiyian Leseni has become a full-fledged TB advocate. She runs an organization called Talako, which in Maasai language means set them free. She wants to set her tribe free from TB. ’

Timpiyian, the 3rd of 5 siblings (four sisters and one brother), lives in Kajiado county, bordering Nairobi in Kenya. In 2011, when she was 36 and married, she suddenly showed symptoms of weight loss, fatigue, sweating at night, loss of appetite and a swollen stomach. Even the smell of food became nauseating, and she would vomit whatever she ate. At first, she thought that she was pregnant, but that was not the case. The doctors put her on antibiotic injections, but they made her no better. Her weight came down to 36 kg, and she could barely walk. A whole body scan revealed pus in her upper abdomen. The doctors drained out the pus and assured her that another dose of antibiotics would make her fit and fine in two weeks time.


But despite the medication, Timpiyian's condition worsened. She started vomiting again. Her debilitating illness had made her look like a skeleton - all skin and bones. One night, the pain in her abdomen became so unbearable that she wanted to die to put an end to all her sufferings. But on her mother's insistence, she was once again in the hospital.
Advertisement
This time the scan revealed that there was more pus everywhere inside her stomach and so a major operation was planned for the next morning to remove it. That night Timpiyian committed herself to God, wanting to be dead rather than have such a painful existence. She thought she would not survive the 6-hour long operation. But survive she did!

An examination of the pus eventually confirmed TB of the intestines. "Till now I had only heard about TB of the lungs. I became curious to know more about this TB that had infected my intestines, and also how I had got it".

The doctor explained that she had zoonotic extra-pulmonary TB (EPTB), which is contracted from animals or animal products infected with TB. He said that if one drinks unpasteurized milk, or animal blood, or eats raw or partially cooked meat, then one can get this type of TB. Timpiyian realized that, like most of her tribe members, blood and raw meat of the slaughtered goats had been part of her staple diet.

She was now put on anti-TB treatment - a course of injections for one month and oral medicines for seven months - along with a protein-rich diet. After two weeks in the hospital, she was finally discharged to go home. But she found it very tough to continue with her medication, due to the severe side effects of the medicines. She lost her appetite and would vomit whatever she ate - at times even the pills. And then she would have to them again. Her right kidney got affected too. But she was determined to complete her treatment.

HELPING OTHERS TO WIN THE FIGHT AGAINST TB

"I gradually limped back to normal and was finally cured of my TB. By now I had realized the seriousness of the issue. Maasai tribe had been eating raw meat and drinking blood from cattle for centuries. I wanted to educate my people on how to prevent and fight TB. Though I was still very weak, I offered my services to hospitals to help other TB patients. They asked me to help with 'lost to follow up' TB patients, who had stopped coming to the clinic to take their medicines. Every morning I would do the rounds of my county, tracing these missing patients. After a lot of persuasions and hard work, I could actually get all of them back on TB treatment. By sharing my personal experiences, I was able to convince others that whatever challenges life throws in our way we have to accept them with a positive attitude and overcome them".

Timpiyian has since become a full-fledged TB advocate. She runs an organization called Talako, which in Maasai language means 'set them free.' She wants to set her tribe free from TB.

"In my hometown of Kajiado, we have started conversations around TB. I inform my community about TB and the risks of getting it from infected animals, as well as from the air. Wherever there is a gathering we make sure to be there to talk about TB, even if it just for 5 minutes. We have also trained about 100 TB survivors to come out of their shame of TB and help others."

While Timpiyian agrees that it might be difficult to transform the age-old food habits of her tribe overnight, at least they must know the symptoms of TB and also that it is treatable.

"I call upon everyone to spread awareness and knowledge about this disease in the communities. I also request my government to ensure that not only treatment but X-Ray screening for TB is also made free (while TB treatment is free in Kenya, X-Ray screening is not). I had come across many presumptive TB patients who were referred to the X-Ray department when their sputum tested negative. But many of them did not get an X-Ray done for want of money. When X-Ray was done at my insistence, it turned out to be TB. It is sad that people with all the symptoms of TB are not getting diagnosed as they do not have the money for X-Ray".

Timpiyian insists that people need to be educated more about TB. They must know that it is a disease and not a divine curse and that it is curable provided one gets proper medical treatment.

"In my community (and perhaps elsewhere too), a woman has to seek permission from her husband if she wants to go to a doctor. It is very likely that the husband might not agree and instead take her to a traditional healer. In my tribe, when you get sick, they slaughter a goat and ask you to take its soup to bounce back. But one cannot get cured of TB (or any other disease) simply by eating goat soup".

Timpiyian stresses upon the importance of community health workers. TB treatment is not just about getting medicines from the doctor. One also needs regular support to complete the long and toxic treatment, and therein lies the role of the community. Without family/ community support many people might not be able to complete treatment. Committed community health workers can help a lot in this. They should be part of the government system and get paid for their services.

Together we can end TB, she reasserts.

What is Zoonotic TB?

Zoonotic TB is a form of TB in people caused by Mycobacterium bovis. While the most common route of transmission of M. bovis to humans is through food (untreated dairy or meat products), the airborne transmission also poses a risk to people in contact with infected animals or animal products.

The current situation in India

In India (and perhaps Nepal) too, the ritual of eating meat and drinking the blood of the sacrificed animal is prevalent in some regions. There is need to focus more on an investigation of zoonotic TB cases.

Two Blood Thinning Drugs 'Safe' for Patients with Irregular Heartbeat
Apixaban and Vitamin K antagonists (VKAs) are the two drugs that have a positive impact on a ......