Zonkey-Cross Between a Zebra and a Donkey 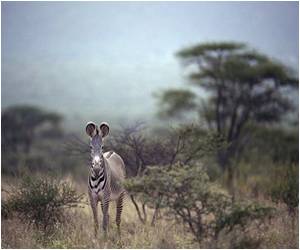 Martin the zebra and Giada the donkey, in an act of love, have produced a rare zonkey, which is drawing crowds .

Three-month-old Ippo is already a star and the owners of the farm say they have received requests to rights over image including one from a soft-toy company and another from Disney to make a cartoon.

"It is very rare that a zebra and a donkey mate and reproduce," Serena Aglietti, the daughter of the shelter's owner, said at the site in central Florence, near the city's landmark monuments.


The family-run Aglietti farm takes in animals rescued from circuses or owners who treat them badly and houses a motley array of 170 animals including camels, lamas and Vietnamese pigs.
Advertisement
Aglietti explained that on one balmy night last year Martin -- who was taken away years ago from a falling-down zoo where he was being abused -- jumped over the fence of his enclosure.

The lusty Martin used his snout to lift the latch a stable door where the donkeys were being kept.

There he consummated his love for Giada, a rare Italian Amiata donkey brought to the clinic to be bred.

After their one-night stand was over, Martin quickly scarpered off.

No one realized what had happened until 12 months later -- the length of a donkey pregnancy.

"We were there at the birth. First the black hooves came out, then the striped legs. We were amazed!" Aglietti said.

"He is doing well. He is naughty but is very sweet with children, he is still on milk but also eating carrots," she said.

The unusual sight at the farm brings hundreds of visitors, who can be seen competing for Ippo's attention and taking pictures on smartphones.

"We were curious to see this very sweet animal. It's very good for children," said Patrizia, a 67-year-old visiting with her family.

Local resident Fabrizio could not hide his shock.

"This is the first time I see him. It's not natural but nature made it possible," he said.

Ippo still looks very much like a zebra-donkey mix -- with the stripey legs of a zebra but a donkey's face.

However, the previous handful of examples of zonkeys around the world -- including ones in China, Japan and the United States -- show that he could grow up looking more like one than the other.

Ippo is officially a "zebroid" -- the name for a cross between a zebra and any other equine.

"Zorse" is the name of a pairing with a horse, "zebrule" with a mule. The zebra-donkey mix is also sometimes known as a "zedonk".

Aglietti said that by November it will also be clear whether Ippo can reproduce or not but no decision has been taken on breeding him with a donkey or a zebra -- or indeed some other animal.

"If he is fertile, he will have the choice of who to mate with among all the animals we have here."

Source: AFP
Advertisement
<< Patient in the Vegetative Stage may Actually be Aware
Chefs and French Presidents Hang Up the Aprons >>

Zonkey, Hybrid of Zebra and Donkey Born in Italy
A zebra mated with a breed of donkey to produce a love child the zonkey in Amiata, Italy....