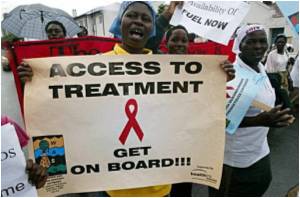 Zimbabwe faces a problem in following recommendations laid down by the World Health Organization on treating HIV, since the country does not have enough anti-AIDS drugs.

Zimbabwe is currently treating about 200,000 people whose immune systems have been severely weakened by the disease, but the WHO recommends that treatment should start earlier.


"The number of people in need of treatment will double if we follow the World Health Organisation plan," Tsitsi Mutasa Apollo, co-ordinator of HIV treatment in the health ministry, said in the state-run Sunday Mail.


"We are likely to experience more drug shortages," said Apollo.

The new guidelines would mean about 500,000 people need treatment, the paper said.

Zimbabwe's prevention and treatment campaign relies on donor funding, after a near decade of economic crisis also which crippled health services.

The country imposes an AIDS levy on workers to fund drug procurement for over 1.6 million people living with the virus.

The decline has been attributed to donor-backed prevention campaigns which promotes safe sex and discourages multiple sexual partners.