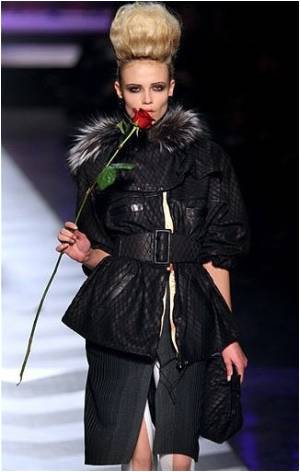 At an environmentally minded New York design school at the start of Autumn-Winter Fashion Week, green is the new black.

Students at the Parsons The New School for Design have come up with "zero waste" fashion, a pun on the controversial popularity on catwalks of skeletal, zero-size models.

"The goal was to create an organic garment with no scraps," said Janelle Abbott, 21, who was a finalist in the student exhibition organized jointly with Loomstate, an eco-friendly label.


Abbott came up with a denim jacket made of triangular segments. "It's a very difficult process, but it's the traditional techniques with adjustments. It could become standardized, with some investigation," she said.

Fashion At School - Now For Mummies When They Pick Kids Up

Queensland's mums are presently involved in a fashion war that takes place at school gates. The sides are apparently divided into slummy mummys who wear pyjamas and tracksuit
Advertisement
Timo Rissanen, 35, assistant professor in Fashion Design and Sustainability, said the average wastage in clothes making is 15 percent. Although recycling is possible, it is also costly.

The idea of "zero waste is as old as clothing," he said. "The Japanese kimono is zero waste, the old underwear in 19th century Europe was mostly zero waste, and American Indians used everything too. It's the industrial revolution which is the cause of the huge waste."

What's hard is making the clothes beautiful as well as virtuous.

"It is very easy to do ugly zero waste," Rissanen said.