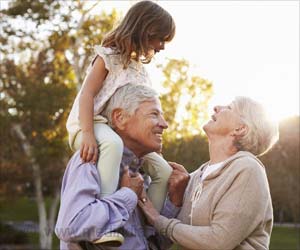 The stereotypes that leads to prejudice and discrimination based on age, especially against old people is called ageism. The ageist stereotypes in children lowers around the ages 10 to 12, but it can be seen occurring in children as young as 3. It is also found that youngsters who maintain a good relationship with their grandparents have very low levels of ageism .

The study, conducted by researchers at the University of Liege in Belgium, appears in the journal Child Development.

Advertisement
‘The frequency of contact of the youth with their grandparents also played an important role on their views on ageism.’


To assess aspects of ageism, the researchers studied 1,151 children and adolescents ages 7 to 16 in the French-speaking part of Belgium; the youths were primarily White, from urban and rural areas, and from a range of socioeconomic statuses. In questionnaires, the researchers asked the youths their thoughts on getting old and about the elderly.
Advertisement
They also collected information about the health of the youths' grandparents, how often the two generations met, and how the young people felt about their relationships with their grandparents.

In general, views on the elderly expressed by the children and adolescents were neutral or positive. Girls had slightly more positive views than boys; girls also tended to view their own aging more favorably, the researchers note.

Ageist stereotypes fluctuated with the ages of the youths studied, with 7- to 9-year-olds expressing the most prejudice and 10- to 12-year-olds expressing the least, the study found. This finding mirrors other forms of discrimination (e.g., those related to ethnicity or gender) and is in line with cognitive-developmental theories: For example, acquiring perspective-taking skills around age 10 reduces previous stereotypes. With ageism, prejudice seemed to reappear when the participants in this study reached their teen years: 13- to 16-year-olds also had high levels of ageism.

The most important factor influencing youths' views of the elderly was the quality of their contact with their grandparents. The study characterized youths' contact as good or very good when they said they felt happy or very happy (respectively) when they saw and shared with their grandparents. Those who described their contact with grandparents as good or very good had more favorable feelings toward the elderly than those who described the contact less positively.

Furthermore, the benefit of meaningful contact occurred in both children with the lowest level of ageism and those with the highest level, and boys seemed to benefit more than girls from high-quality contact.

Frequency of contact, while mattering considerably less, also played a role: 10- to 12-year-olds who saw their grandparents at least once a week had the most favorable views toward the elderly, likely because of the multiplying effect of frequency with quality, the researchers suggest.

"For many children, grandparents are their first and most frequent contact with older adults," notes Stephane Adam, professor of psychology at the University of Liege, who coauthored the study. "Our findings point to the potential of grandparents to be part of intergenerational programs designed to prevent ageism. Next, we hope to explore what makes contacts with grandparents more rewarding for their grandchildren as well as the effects on children of living with or caring for their grandparents."

Grandparents Old-Fashioned Health Myths May Put Children at Risk
Pediatricians should not make the mistake of taking for granted that because grandparents have ......

Children Raised By Grandparents Consume Unhealthy Snacks, Tend To Be Obese
Grandparents tend to indulge, overfeed and protect grandchildren in their care from physical ......

Grandparents Are Also A Reason For Obesity in Children
Many live-in grandparents in local families view a fat child as a symbol of health and success and, ...