Your Dog to Bust the Great Stress at the Bureau 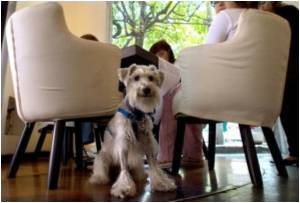 Bringing your dog to the office may well act as a genuine stress buster and also boost goodwill, avers new research.

Stress is known to contribute to employee absenteeism, morale and burnout, eroding productivity and resources, according to Virginia Commonwealth University researchers.

Meditation therapy is one of the best Alternative Therapies. It is a Mind-Body Medicine.
Advertisement

They compared employees who bring their dogs to work and those who don't and those without pets and how it impacted stress, job satisfaction, organizational commitment and support, the International Journal of Workplace Health Management reports.


"Dogs in the workplace can make a positive difference," said principal investigator Randolph T. Barker, professor of management at the Virginia School of Business.

We meditate to calm the mind and perceive inner self through spirituality. On the other hand, we also meditate to relieve stress and ease other lifestyle disorders.
Advertisement
"The differences in perceived stress between days the dog was present and absent were significant. The employees as a whole had higher job satisfaction than industry norms," added Barker, according to a Virginia statement.

The team noted that stress significantly rose during the day when owners left their dogs at home compared to days they brought them to work.

For example, Barker said, employees without a dog were observed requesting to take a co-worker's dog out on a break. These were brief, positive exchanges as the dogs were taken and returned and also resulted in an employee break involving exercise.

Other findings revealed mostly positive comments from employees such as "pets in the workplace can be a great bonus for employee morale," "having dogs here is great stress relief" and "dogs are positive; dogs increase co-worker cooperation."

Tap into the powers of mind-body therapy called yoga and find out how you can use yoga for effective stress management.
Advertisement
Advertisement