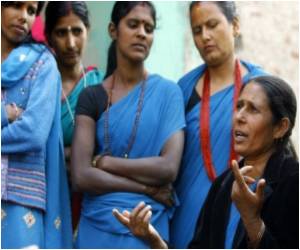 A pregnant woman was burnt alive on Monday by her own family members in a settlement near Morang, about 550 km east of Kathmandu in Nepal.

Local media reported on Tuesday that Maina Bardewa Bhitrikoti, 22, was pregnant with four-month-old foetus in her womb. They said that she was severely beaten by her family members until she fainted. Then, she was put on a stack of hay in a rice field near her house and burnt alive.

"The family members put her into a bale of hay in a field close to their house and set her ablaze," said police sub-inspector Rajendra Chundal of Area Police Office, Sijuwa and Morang district.


"By the time police reached the scene, fire had charred half of her body," he added.

Though cause of the murder has not been known so far, it was apparent that relations between her and the family of her migrant worker husband soured after she had a miscarriage a year ago. Maina was married to Prithvi Bhitrikoti about two years ago. Her husband returned home from Qatar eight months ago.
Advertisement
"Yesterday Maina rang me up to say she wanted to discuss some domestic issues. I had told her I would reach her home on Monday morning, but I did not know yesterday was the last time I was talking to her," Maina's mother was quoted by the Himalayan Times Daily, as saying.

"At around 3 a.m. today her husband called us to say that Maina had left home. But after three hours we came to know that they had murdered her," said the mother.

When local people and relatives of Maina's mother heard about the incident, they tried to attack her husband and his family and set his house on fire, but security personnel stopped them from doing so.