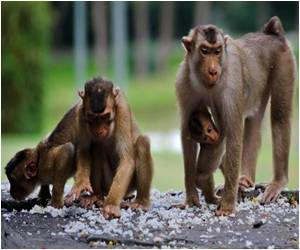 Scientists knew that primates often form stronger bonds between one sex over the other. Females, for example, often form closer ties with one another than males. That was thought to be because females often remain in the groups they were born into, forming bonds with their relatives, whereas males of many primate species leave home when they reach maturity.


But this study was one of the first to show that primates form preferential bonds between relations of the same sex before they have even left the group.


Researchers found that young monkeys had an equal opportunity to mingle and interact with either parent when growing up. As they were developing, infant monkeys of both sex spent most of their social time with their mothers and her relatives. That wasn't surprising, as mothers tend to spend most time with their young after weaning, so the juveniles become more familiar with her and her relatives.

But at the point of maturation, when infant monkeys develop into young adult monkeys, males very much became their fathers' sons; preferring to spend time with their fathers and his relatives.

It was still not clear exactly why the young male monkeys do this; one idea is that it helps prepare the young males for later life. Or it might allow them to form bonds with other male monkeys who will leave the group at a similar time. By becoming friendly, these males might be useful to one another as they try to establish themselves elsewhere.

The study is published in the American Journal of Primatology.

New AIDS Drug Protects Monkeys from Getting Infected
A new drug against AIDS tested on monkeys provided an astonishingly effective shield against an animal version of the AIDS virus, said scientists on Wednesday.
READ MORE

Notorious Monkeys are Curious Despite No Immediate Benefits
Notoriously curious monkeys are eager to find out more information like humans even if there are no immediate benefits, reveals a new study.
READ MORE

Training Monkeys to Recognize Themselves in Mirrors
Rhesus monkeys don't realize that when they look in a mirror, they are seeing their own face, but a new study has demonstrated that the monkeys can learn to recognize themselves in mirrors.
READ MORE

Monkey Calls Describe Both, the Nature of a Threat and Its Degree of Danger
The same species of monkeys located in separate geographic regions use their alarm calls differently to warn each other of approaching predators
READ MORE