Yorkshire Brewery: The Best Beer in the World 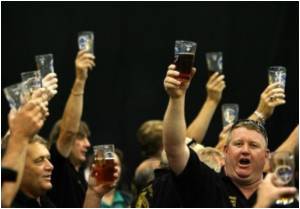 The coveted title for the best beer in the world has been officially awarded to Yorkshire brewery.

The Great Newsome Brewery won the Gold Mark at the World Beer Awards for its Frothingham Best, the Daily Star reported.

The beer won "The World's Best Bitter up to 5 percent abv".


It beat off breweries from all over the world to win the coveted award.

Frothingham Best, which has been brewed since 1998, is now going to be exported to Italy.

Beer as Reward for Spending Three Minutes Idling Away
A new vending machine, which aims to help people de-stress, will give beer as reward for spending .....

'Beer Today, Vote Tomorrow' is the Mantra at Oktoberfest
Revelers gathered for the Oktoberfest beer festival are hoping the heady atmosphere will not be ......