'Yoga Therapy Can Cure Every Disease And Disorder' 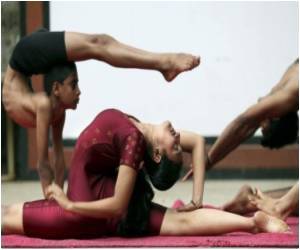 A Delhi-based yoga therapist has claimed that yoga therapy can cure every disease and disorder, even cancer. But the therapist has warned against the mass teaching of yoga - including popular pranayams like kapalbhati and anulom vilom - saying they "can cause complications".

"Yoga cannot be universalized...like prescribing a paracetamol tablet," says Subhash Sharma, a yoga therapist who spent 19 years in a gurukul in Rajasthan and is also a post-graduate from the Kasturba Medical College, Manipal.

Sharma told IANS: "People have different physiologies and each person's response to yoga is individualistic. Therefore, there can't be standardization of yoga for any particular disorder."


Sharma, who describes himself as a pioneering yoga therapist and runs a busy practice in south Delhi, says even a step-by-step book on yoga can be "fatal".

Animation for yoga asanas. Yoga helps to maintain a healthy balance of the body,with its set of movements or exercises
Advertisement
Recounting a particular case, he says one gentleman had come to him with a problem - he had lost the sensation of the nerves to the anus that tell us when to pass feces.

"He had learnt the steps from a book and started practicing 'nauli kriya', or rotating of the intestines. This paralyzed the nerves to the anus. He did not know when he was passing stools, he would only make out from the bad smell."

Bhastrika, a popular yogic pranayam that many people do while following an expert on television, can cause asthma, warns Sharma.

"In bhastrika pranayam you pump the lungs. It can hyperventilate the lungs and people can develop asthma."

Another popular pranayam, kapalbhati, is "dangerous, especially for women", he warns.

"If kapalbhati is done without 'bandhas', or shutting the anus and vagina, then the pressure will fall on the visceral organs (internal organs) and they will be pushed downwards. Women can develop uterus prolapse (where the uterus can sag from its normal position)."

Each of Sharma's patients is given yoga therapy keeping in mind their body type and problem. The patient's response is monitored closely and changes are made accordingly.

Anulom vilom, perceived to be a simple pranayam in which you breathe in through one nostril and breathe out though the other, is also not advisable for all, he says.

"When we force in air from one nostril and exhale from the other, it upsets the respiratory center of the brain which controls breathing," he says, adding, "Lots of precautions should be taken before going in for anulom vilom."

Sharma has crowds of people coming to him with all kinds of problems, ranging from arthritis, asthma and blood pressure to cancer and even cases of muscular dystrophy. Sharma says he has cured many cancer cases, including blood cancer, brain cancer and breast cancer.

He recounted the case of a British woman with brain cancer who had undergone surgery and been given three months to live. "It is four years since she has been cured," he said.

Bhavna Singh is full of gratitude to Sharma. Her mother, who was diagnosed with stage 3B cancer of the uterus two years ago, is "doing perfectly fine now" with the disease in remission. Doctors had given her mother 25-30 percent chances of survival. They did chemotherapy and radiotheraphy sessions simultaneously with Sharma's yoga therapy, which included a diet regimen.

"My mother is doing absolutely fine...I'll give the whole credit to Sharmaji," Bhavna told IANS, adding that her mother did not lose even a strand of hair despite intensive chemotherapy.

"There is a yogic asana for anything and everything - one only has to have faith and patience," says Sharma, who has worked with cancer patients at AIIMS for many years.

Among his many patients is Priya Narayanan, a patient of multiple sclerosis, an auto immune disorder. Priya, a trained Carnatic singer, was doing her PhD in chemistry around 20 years ago when she noticed she was losing the use of her muscles. Many rounds of doctors and hospitals later, and with no hope left, she arrived last year at Sharma's clinic.

"Priya has begun to show some control over her muscles," her mother Veda Narayanan told IANS.

According to Sharma, Priya, who cannot walk without help, will be able to walk on her own in three years.

He says true yoga can be practiced only by yogis who live aloof from society. Normal, social human beings running the material race suffer from psychosomatic disorders and diseases - and for them therapeutic yoga is the only answer, he says.

Sharma is keen that the Indian government "amalgamate the study of yoga with the study of human physiology - to develop yoga therapists".

"The government should teach yoga and medicine together, and create yoga doctors," he says.

Is the government listening?

Pranayama is the control of all life-forces by realizing naught but Brahman in all things as the mind. Breathing exercises help to control bodily functions.
Advertisement

Meditation therapy is one of the best Alternative Therapies. It is a Mind-Body Medicine.
Advertisement