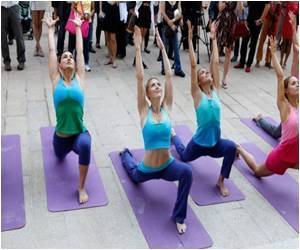 Yoga class once a week is enough to ease lower back pain and causes reduction in the need to take pain-killer medication, say researchers.

The results of the study indicate that patients interested in trying yoga for lower back pain could benefit from attending a medically appropriate weekly yoga class.

The healing effects of yoga benefit those suffering from backpain, by alleviating their pain and also preventing its recurrence.
Advertisement

The study was led by first author Robert Saper, MD, MPH, associate professor of family medicine at BUSM and director of integrative medicine at BMC.


Saper said that lower income patients often have worse lower back pain due to limited access to both mainstream health care treatments and complementary treatments such as yoga, massage and acupuncture.

Quiz on Back Pain

Do you know your back pain? Take this quiz and find out what type of back pain you may have and how to deal with it.
Advertisement
In this 12-week randomized trial, 95 predominantly low-income adults suffering from moderate to severe lower back pain were divided into two groups.

One group attended yoga class once a week and the other attended twice a week, and both groups were encouraged to practice the poses and techniques at home.

At the end of the 12 weeks, both groups of participants experienced similar and substantial decreases in their pain level and need for pain medications, but there was no additional benefit seen in those attending twice a week. Also, their ability to perform daily functions improved.

The study has been published in Evidence-Based Complementary and Alternative Medicine.

Yoga is Better for the Brain Than a Regular Workout

A new study has found that just 20 minutes of yoga is better for the brain than vigorous exercise for the same duration.
Advertisement
Advertisement

Back pain or Backache is common due to poor posture, postural deformities and life style. Back pain can be ...