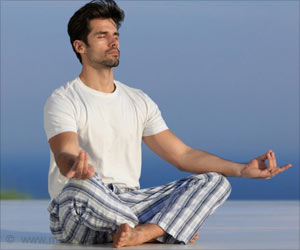 Men with prostate cancer who are undergoing radiation therapy can benefit from practicing yoga, says a new study.

Lead author Neha Vapiwala of the Penn's Abramson Cancer Center found that general quality of life and measurements of side effects often experienced by prostate cancer patients like fatigue, sexual health, and urinary incontinence, were stable throughout a course of outpatient radiation therapy among the men participating in an intensive yoga program.

Vapiwala said that the possible explanation for the benefits of yoga seen in the study stems from physiologic data demonstrating its ability to help reduce cancer- as well as treatment- related fatigue and to strengthen pelvic floor muscles and increase blood flow. She said that there might also be a psychosocial benefit that derives from participation in a group fitness activity that incorporates meditation and promotes overall healthiness.


Researchers found that a structured yoga intervention in the form of twice-weekly classes was feasible for patients during a six- to nine-week course of outpatient radiotherapy for prostate cancer.

Almost 90% of men with advanced prostate cancer carry genetic mutations in their tumors that could be targeted by either existing or new cancer drugs.
Advertisement
In the study, 68 eligible prostate cancer patients were identified and offered study participation, of which 45 consented (66 percent) to attend twice-weekly yoga classes of 75 minutes each.

Most yoga participants reported a sense of well-being at the end of each class, and upon finishing the yoga program and concluding their study involvement, many patients requested and received an at-home practice routine to fit their needs.

To find out if shift work also causes prostate cancer, the researchers evaluated personnel and health data of 27,828 male workers of a chemical company.
Advertisement
<< IRCM Researchers Identify A New Target for Immuno-Oncology ...
People Who Drink Coffee are Less Likely to Die from Certain... >>

At the University of California, San Diego, a team of cancer researchers has identified the existence of precursor cells in early prostate cancers.

Find a Doctor Loram (2 mg) (Lorazepam) Indian Medical Journals Noscaphene (Noscapine) Drug - Food Interactions Sinopril (2mg) (Lacidipine) Drug Side Effects Calculator Blood Donation - Recipients Find a Hospital Blood Pressure Calculator
This site uses cookies to deliver our services. By using our site, you acknowledge that you have read and understand our Cookie Policy, Privacy Policy, and our Terms of Use